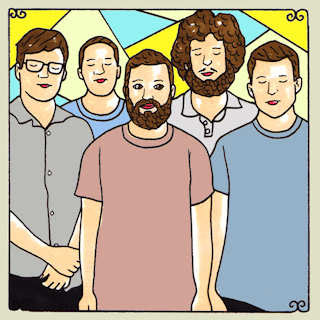 Single Mothers are a righteous Hardcore Punk band hailing from Ontario, CAN who "broke up in 2009 - and have been playing shows ever since." They had re-formed by 2011 and disbanded again soon thereafter, but released one final EP, Single Mothers 7" (Secret Voice). But it seems like Single Mothers are back in saddle again!; The band's currently hanging out in LA, working on their Hot Charity/Dine Alone full-length with guitarist-producer, Joby J. Ford @ Big Game Lodge Studio. For what it's worth, Single Mothers is the best Hardcore band name since... Athlete's Foot, my non-existant Punk band ha. While it was originally released on Bandcamp roughly 1½ years ago, "Christian Girls" was mysteriously re-uploaded to Soundcloud just 16 days ago. Andrew Thomson, Michael Peterson, Matt Bouchard, and Evan Redsky are headed out on a MASSIVE 37-date "reunion tour" across the US/UK with The Bronx from Feb. 2-March 24th.


"For Single Mothers, bullshit came early. It's members were born throughout Ontario in the late 80's and early 90's, all to lower class families and many to single parent households. Some grew up on native reservations while others were raised by maternal grandparents. Some were the by-products of one-night stands. Some have 20 siblings ... Single Mothers quickly ran through 9 members. Known to fire his entire band outright - which he did in 2009 - and to have 2 different versions of the band existing at the same time, [Andrew] Thomson would simultaneously dissolve the band and keep it going. At one point, the band even continued on without him."

Posted by Matt Horowitz at 5:34 PM