Hit Me, Baby... One More Time: Iceage - "Coalition" (You're Nothing, Denmark) 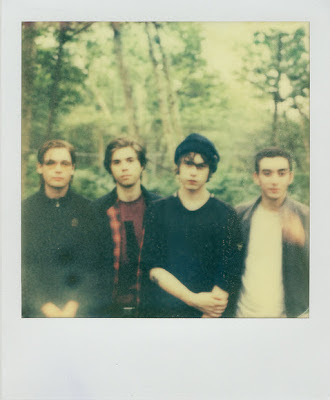 While I think my overall musical tastes are pretty cultured and broad-spanning/sound, I must admit that I'm not too keen on current world music. Honestly, when I hear "World Music," what first comes to mind is African Tribal drums, Middle Eastern Acid Rock, Swedish Pop, Mariachi, and South African jam bands. I'm vaguely familiar with Asian Jazz-Fusion, Grime, bagpipe-led Celtic Punk, and Finnish/Norwegian Death Metal. When I first got my learner's permit [license] back in high school, my buddy Ryan and I were driving all over New Jersey, searching for terribly assembled D.I.Y. Punk shows @ dirty VFW halls and seedy hole-in-the-wall bars/clubs. 1970-80's Hardcore Punk is generally associated with it's formative New York, California, and UK scenes... But I guess we, myself included, tend to forget that there are rebellion-fueled, aggressive, socially awkward teens all over the world! Somehow, throughout my 10-12 year relationship with Punk Rock, I've only just recently stumbled upon "worldly" Hardcore bands like Refused (Sweden) and Iceage (Denmark).


Refused have broken up, re-formed, and broken up (again) since their mid-90's "reign of terror." But Iceage on the other hand, are a band of 20-something Danish Punks prepping the release of their second album, since initially forming in 2008. You're Nothing (Matador) is the follow-up to New Brigade and their proper state-side debut. Elias Bender Rønnenfelt, Jakob Tvilling Pless, Dan Kjær Nielsen, and Johan Wieth's ages range from about 19-22 ... and the band's shows are supposedly a bloody AWESOME mess! Iceage unleashed a hard-hitting sample from the album, "Coalition," late Tuesday afternoon; It's a fast-paced sex-fueled romper, but trust me, it bears no resemblance whatsoever to Ke$ha or Britney Spears' promiscuous exploits ha. Iceage are headed out on a MASSIVE 26-date tour across America, which'll run from Jan. 24-May 30th. They'll be making a stop @ Fist Unitarian Church [Philly] on April 19th, roughly 2 months after You're Nothing's slated Feb. 19th world-wide release.
Posted by Matt Horowitz at 3:17 PM