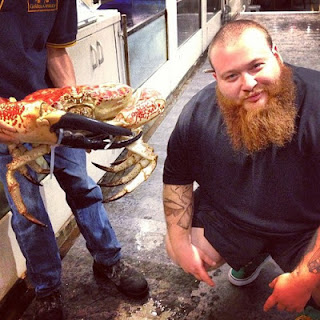 
It's really the kinda thing that makes you slightly re-evaluate your life and ask yourself, "Why the fuck haven't I been to an Action Bronson show yet!?" The top chef-turned-rapper aimlessly navigates his way through the wall-to-wall packed Wellington, NZ venue, mic and milkshake in hand... as fans [sloppily] attempt to pass him blunts, beer, a baseball cap, lace panties, and even a vacuum-sealed steak! In addition to his 2013 VICE Records full-length, Action Bronson's pretty busy working on a few mixtapes, too: Mr. Wonderful, Saab Stories, and Blue Chips #2, which're each fully produced by Tommy Mas, Harry Fraud, and Party Supplies (respectively).

Posted by Matt Horowitz at 8:21 PM