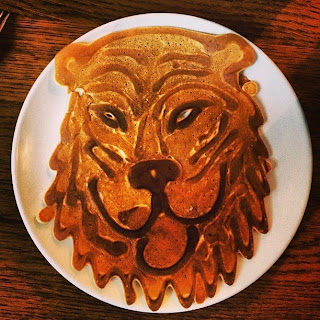 More of less a self-proclaimed "1984 punk, 1990 comics, 1993 writing, 1994 publishing, 2004 videos, 2008 production, 2012 commercials, 2013 movies"-affiliated Renaissance Man, Gavin McInnes surprisingly has one of the most interesting and family/kid-friendly Instagram accounts [sans boobs]. Granted, it's a little more tame and less in-your face than DO's & DON'Ts or say, uh... Street Boners or How to Piss In Public AKA The Death of Cool; McInnes started doing #pancakemorning(s) almost every Sunday roughly 42 weeks ago. I'm an amateur baker by day and I'd guess he's either pumping pancake batter out of icing bags of skillfully cutting breakfast art into pre-made pancakes. What kinda seems like a made-to-order kitchen service has included golden brown renderings of everything from Jon Cena to a "walking butt," as well as countless Ninja Turtles and TMNT super-villains. When he's not playing with his food, Gavin McInnes runs a Hipster fashion-bashing site called Street Boners & TV Carnage, hosts an online mini-series for French Kiss Records TV every once in a while, frequently appears as a guest panelist on Red Eye, and may or may not be working on 2 separate quasi-documentary films: How to Be a Man and The Brotherhood of The Traveling Rants, which will be available ONDemand, Netflix, and iTunes this upcoming Sept. 24th.

Posted by Matt Horowitz at 8:05 PM