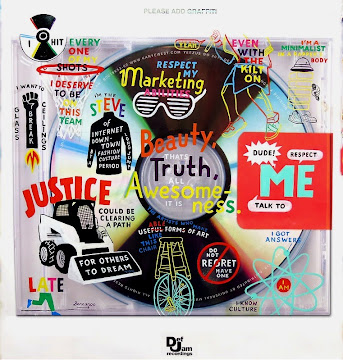 "Bound 2" is quite easily the most Kanye West-sounding track on Yeezus, an album which on-again Nine Inch Nails frontman Trent Reznor is indeed a fan (and obvious influence): "Yeezus, I really love it. I think the sound of it is cool. I can't endorse what he's saying lyrically, but I will say that in terms of the role of the dangerous entertainer in 2013, nobody is beating him at that game. It feels like he might implode. Even if it is calculated to some degree, it feels rough on the edges in a way that I can appreciate. I'm glad he's out there. Consistently he's put out ahead-of-the-curve shit. He's definitely a talented guy." The Roots drummer and de facto bandleader ?uestlove expressed his admiration for Track #10 pretty early on in 140 characters or less: "ok this #Bound2 on repeat all day is a problem. don't wanna hear anything else, but #Bound2 (including the 9 songs before it) #Yeezus." Meticulously constructed from a Ponderosa Twins + 1 sample, "Bound 2" is rumored to be the next Yeezus single; after building-projected "New Slaves," righteous anti-single "BLKKK SKKKN HEAD," and the controversial VMA-performed "Blood On The Leaves."


While it's such a well-orchestrated track and even though this is one of my favourite recent pair of couplets, Kanye almost fucks up "Bound 2" with his madd line-ending repetition: "I know I got a bad reputation / Walking 'round, always mad reputation / Leave a pretty girl sad reputation / Start a Fight Club, Brad reputation." Kanye supposedly appeared as special walk-on guest during Late Night's planned Monday night Duck Dynasty & Steve Harvey episode, which Jimmy Fallon said is one of the "cool things[s] about doing a show in NYC - anyone can drop by #nojoke." Former Gap Band frontman and re-bounded G.O.O.D. Music affiliate Charlie Wilson was also in toe to help deliver "Bound 2"'s ever so slightly deranged-sounding hook. While Kanye looks pretty un-enthused post-performance, it was quite the made-for-TV-moment; we're talkin; about College Dropout era Kanye, further accented by The Legendary Roots Crew, and extremely talented kid's choir, and Mr. Wilson's Deep Soul-drenched vocal afflictions. Hollywood's latest proud father announced that he'll head out on his first solo tour since 5 years in support of Yeezus this past Friday, along with Kendrick Lamar and a currently unannounced special guest... coincidentally running almost concurrently with Jay-Z's Magna Carter World Tour (10/19-12/7).
Posted by Matt Horowitz at 7:03 AM