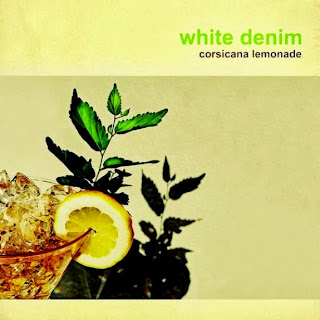 Once you get past the inherent trippiness and utter nonsense that comes along with White Denim's latest "Pretty Green" video, it's a pretty damn great Rock "N" Roll number. Austin's finest recently teamed up with director(s) The Modern Plow Collective to create what The Line of Best Fit (who premiered the video) describes as "a particularly hungry acid trip." It features both quick glimpses and extended scenes of White Denim dressed in all sorts of fucked up food masks, face-encompassing beards, empty-looking gold masks, green screened giant lips, and a bunch of 90's-reminiscent cheesy CGI video trickery. Forget about anything vaguely weird that Michael Jackson ever released, White Denim have easily produced the most tripped out performance video I've ever seen! ha Sonically, I think "Pretty Green" sounds a lot like The Black Keys and I'm sure we could sit here and argue ALL DAY about who came first... Wilco frontman Jeff Tweedy produced 2 tracks along with help from buddy Tom Schick on Corsicana Lemonade, which is either out on October 29th or November 4th; a "Listen to White Denim" yellow vinyl/sleeveless T-shirt/LP slip mat bundle is currently available for pre-order online for just $49.99.

Posted by Matt Horowitz at 7:46 AM