Anderson.Paak & Knxwledge Make Their Late Night TV Debut As Nxworries with Miguel Atwood-Ferguson-assisted "What More Can I Say?" Performance Video (The Tonight Show) 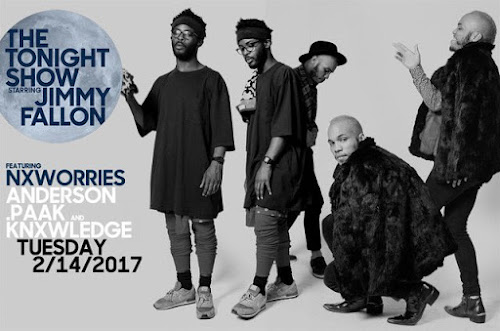 "Following the release of their debut album YES LAWD! in October, Nxworries makes their TV debut with a live performance on The Tonight Show Starring Jimmy Fallon last night. The duo [performed] their song, "What More Can I Say?" off of YES LAWD! backed by a string quartet arranged by Miguel Atwood-Ferguson. The performance can be viewed online on NBC's website now," reads a fragmented chuck of a Wednesday morning press release I received from Duncan Will at Orienteer (formerly Liberal Arts and Life or Death PR). Anderson.Paak & Knxwledge made their collective late night TV debut on a special Valentine's Day episode of The Tonight Show alongside Ice Cube's Fist Fight co-star Charlie Day and socialite Kendall Jenner. I have to admit, "What More Can I Say?" was entirely unlike anything I had ever previously seen on late night TV; playing out more like a live-shot music video than your run-of-the-mill pre-recorded late night performance. Anderson.Paak started out sprawled across a living room-esque couch in what very well could have been a pair of pajamas, while an unknown female stomped on stage and swiftly threw a pair of panties (seemingly not hers) onto his chest. She begrudgingly sits down alongside .Paak on the couch as Knxwledge begins to artfully build "What More Can I Say?'"s back-beat on an MPC anchored by The Notations' similarly-titled 1973 CRA Records single, "What More Can I Say?" backed by a Miguel Atwood-Ferguson-helmed string section seated behind the elaborate scene.


Not even a mere minute into Nxworries' riveting performance, a second white-knuckled woman (maybe the owner of said panties) rapidly marches her way in and throws a drink right into Anderson.Paak's face. He adamantly attempts to sing his way back into their good graces for the remainder of "What More Can I Say?" to no avail—until Knxwledge rises from his chair, hands each woman a red long-stemmed rose, and saunters off into the distance with both of them! Anderson.Paak remains on the couch head in hands, seemingly befuddled, and doesn't even manage to break character, as Jimmy Fallon excitedly announces, "YOOOOOOOO, Nxworries! YES LAWD! is available now," amidst a ripping and roaring crowd. Knxwledge's latest Hip-Hop standard-remixing release, WT​.​PRT10​.​8_ is currently available for streaming and downloading on his personal Bandcamp page, along with 78 additional like-minded releases; Anderson.Paak, fresh off a politically-charged 2017 GRAMMY's performance with A Tribe Called Quest, Busta Rhymes & Consequence, recently announced a proper full-length with his trusty backing band, The Free Nationals "droppin'" at an unspecified date later this year. Anderson.Paak & The Free Nationals are currently preparing to head out Bruno Mars' gargantuan 24K Magic Tour opening for 33 of a whopping 85 continent-spanning dates between 03.28-06.15.