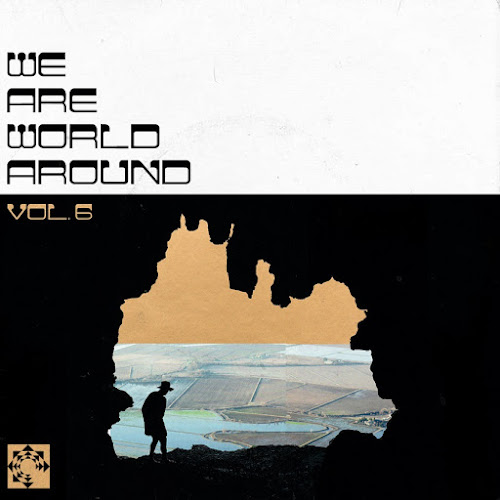 I'm currently working on ironing out the fine details for a premier of a Zilla Rocca remix of CURTA's "Rap Trope Questionnaire" (or CURTA ZR remix), which should be making its digital debut here at The Witzard shortly. While emailing back and forth with Zilla, Jake & Brent, Zilla nonchalantly mentioned he had a track on a compilation released by "the guys from this label I rocked with for a while, World Around Records;" said compilation was uploaded just one day prior on Valentine's Day and was fittingly titled, We Are World Around Vol. 6. Zilla further detailed that "World Around was based out of New England and put out some good, spacey East Coast Art-House records over the years, if you're not familiar with them" within his initial email. As a matter of fact, the deeper I dug into We Are World Around Vol. 6 (WAWA V6, for short), I realized that while I hadn't previously heard of the label, I previously had worked with a number of the artists on their latest compilation: DJ Manipulator, Thirtyseven aka Hump Jones aka Justin Bolard—one of World Around's Founders, Es-K, who recently released Building Bridges with General Steele, Zilla Rocca affiliate Curly Castro, and of course, Zilla himself.

I decided to email a handful of the artists I had previously worked with, in an attempt to get a few artist statements for some sort of planned label feature... which quickly turned into the massive label-spanning piece you now see plastered across this space in two parts. It's really been a true pleasure getting to know World Around Records' Founders Dr. Quandary (Kyle Tierce), Thirtyseven/Hump Jones (Justin Boland), and long-time label mate Louis Mackey (Michael Raso), who took over Tierce's duties as Creative Director when he left in 2012 due to personal and health-related reasons. "After a solid decade-long run, with its remaining artists focusing on their own personal endeavors, World Around closed its digital doors at the end of 2016, leaving behind an archive of over forty albums, EP's, and compilations, as well as a number of singles and side-projects, many of which are still free to download." It's been great getting to know Kyle, Justin, Michael, and their crew of extremely talented artists and while it's sad to hear that World Around is shutting its digital doors, it's amazing to hear one last collective hurrah across We Are World Around Vol. 6. I'm looking forward to see and hear what this talented batch of of rappers, producers, musicians, and artists have in store for the incredibly unsuspecting world next!

"Places&Spaces is a new group by myself and Zooki, a long time friend. We made our first song together in around 1993-1995. Can't even remember. But for the last 20 years, we haven't done anything together and lost contact. We met again together in 2016 at some beat-making sessions run by a mutual friend for another project that's hopefully, to be released sooner or later. We decided then, to make some beats together under the name Places&Spaces the name comes from the Donald Byrd album with the same name, which we both really love. So, here we are now, with our first release on the final [We Are World Around] compilation. We have already about 30 beats ready and we have planned to release these in the coming months.

Here are some links about our past, when Zooki and I first worked together in 1993 and 1995. Back then, we were in a group called 3TP (short for Three Tree Posse). By the way, the raps are in Swiss-German."

"Beat for the comp. was produced by incise... think our first song over a Quandary beat was 2008, "A Love Supreme." I rock my World Around T-shirt regularly. One of my favorite rappers is Louis Mackey."

"'Souvenir" was a sort of musical anomaly for me. It came out of nowhere and was made quickly; one sitting, to be exact. It popped into existence about two years ago, during a brief creative sprint in which I also made another couple of tracks, "Harmack" and "Lament." As of late, I haven't been making beats as much as I probably should, so it's quite rare when a sprint like that happens. I ended up forwarding it to Steph Pockets and we drafted a rough take with her vocals. Unfortunately, nothin' ever happened with the draft and it still hangs in the balance."

"This is one of those songs that went through a half-dozen iterations before it made it out. I think I made the first version back in 2011 or 2012? The samples and the vibe were totally different when I started. I revisited it for a project I was working on in 2015 and passed it to [Curly] Castro and Thirtyseven, who I knew had wanted to work on something together for awhile. They both killed it, but once I had their vocals in the track, I decided I hated the beat, [so I] totally scrapped it and built up a new one from scratch. It still felt like there was a little something missing, so I hit up DJ Manipulator to round it out with a scratch chorus. Since it never really had an official title, Thirtyseven randomly christened it "Mosaic Chamber" and the rest is history. The project it was originally slated for got caught up in production Hell, so rather than let such a dope cut gather dust, I thought the World Around comp. would be a perfect place for it."


"Well, the song was a long time bucket list goal, of working with ThirtySeven aka Humpasaur Jones aka Rorschach's Mask's favorite rapper. I have always wanted to cut a record with the pharaoh, and He & Quandry & World Around Records made it happen. I was drawn to [World Around] Records initially by their specific aesthetic. Any underground operation who holds themselves accountable artwork-wise, is an operation after my own heart. Memetic Supply Co. has worked on my partner-in-crime's (Zilla Rocca) releases, as well as my own. And I am forever grateful. Salute to World Around Records for helping expand a Brother's platform and for helping extinguish some of my Hip-Hop Life goals. Intelligence is not a Handicap. And World Around takes that phrase as self-evident. Rest in Freedom, WA."


"'Mosaic Chamber" is just an old-fashioned banger, but that's been my main interest lately. I've needed to work with Curly Castro for a long time and hope to do more in the future—dude is one-of-a-kind. Been a DJ Manipulator fan for a while, too. He's got a great production approach, in addition to the turntable skills. I haven't really processed World Around, so I don't have any final statement on it. The fact it even happened is still sufficiently surprising, I can't even process the fact it's over yet. We were doomed, it was stupid, and I had a great f**king time!"


"How I got involved: Quandary is a real good friend of mine. Aside from being a dope producer, he’s one of the best graphic designers of all time. He’s done a lot of album art for me and we always keep in touch. A while back, he sent me the track and asked me to bless it with some cuts, so I had to do it for my homie. The cuts came out dope... I met Quandary through Zilla [Rocca]. I saw the artwork he did for one of Zilla's singles and fell in love with his work."


"Recorded Thirtyseven's [vocals] the night after me and him attempted suicide, unintentionally, by weapon's grade champagne. I had just landed a new job that paid considerably more and wasn't squeamish about dropping money on fun. The sum total of him delivering that verse and one other we recorded that day made up the bulk of us being vertical that day."

"As far as the track itself... my track was #5... "Funk Break." As with most of my beats, this was thrown together in the wee hours of the morning. It was originally intended to be used be a crew of B-boys. They do live shows on Church Street in Burlington, VT and they were going to use it as part of their show, so I wanted to create something that reminded me of an old school breakbeat and this is what I cooked up. This is definitely a departure from my normal production style, but I enjoy getting out of my comfort zone and producing things that aren't quite so predictable. The mix is a little rough, but I am not a professional engineer, nor am I a perfectionist, so everything I do is a little rough. I've come to sorta embrace that as my trademark. I've been doing production work for 8-9 years, but really only got in to mixing in the last 3-4 years and it has certainly been an adventure opening up that can of worms. Anyway... it has been an absolute honor and a pleasure getting to know these guys and having them welcome me in to their fold. It's a great feeling after years of hard work to get some recognition from other producers and artists that you look up to so... I am very pleased to be featured on the farewell compilation."


PLEASE SCROLL DOWN TO CONTINUE READING PART II OF THE WITZARD'S EXCLUSIVE WE ARE WORLD AROUND (VOL. 6) COMP. BREAKDOWN featuring words and insight from Dr. Quandary & Louis Mackey (Sword & Pine), Zilla Rocca, Waldo from Cincinnati, Es-K, Adam Kadmon, and Louis Mackey with an introduction from former Creative Director, Co-founder, and beat-maker Kyle Tierce (Quandary). We Are World Around Vol. 6 now available for unlimited streaming and download at Bandcamp!

Posted by Matt Horowitz at 9:59 PM