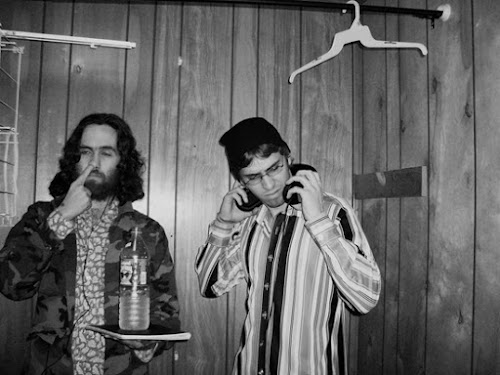 Creative Director Kyle Tierce (Dr. Quandary) with some final words on World Around Records: "One of the things we had always really enjoyed putting together, and which had also always been hugely successful, was our annual We Are World Around compilation series. Starting in 2010, we made it a tradition to kick off each new year by releasing a collection of new material from our roster and our extended family. We'd invite the whole gang, as well as whoever else we might be digging or working with at the time, to throw down some exclusive music, which we'd then weave together to create a tracklist. It was always amazing how well they would come together—in hindsight, they always sounded pretty polished and cohesive, even though they weren't pre-planned in terms of theme or whatever.

We Are World Around, Vol. 6 wasn't any different. Within a couple days of emailing everyone, we had already received something like seven tracks, so we were well on our way to having a full compilation on our hands. One of my favorite things about this one, in particular, is how well it reflects the growth and history of World Around. The long-time roster members are there; old friends like Stypes and Curly Castro showed up; we had appearances from newer friends like Penumbra, Es-K, and DJ Manipulator and on top of all [that], you can see old faces moving in new directions, like with Naturetone's new production duo Places&Spaces. Overall, I think everyone came entirely correct and the compilation plays like a dream. One thing I had really hoped for when we decided to shut down this decade-long experiment in Hip-Hop weirdness was that we'd be able to go out on a high note and I think we can safely say we did."

"Louis Mackey and I have dabbled with co-producing tracks for awhile now, but we had only ever put out two collaborative beats—the double-single "White Nights & Black Days." I have a folder full of half-finished stuff he's passed on to me, so for the compilation I decided to pull out one of those and see if I could build a full-length track with it. I down-pitched his original samples, chopped some new pieces, wrote a bass part, added some additional drums, layers and vocals, [and] then, structured it from there. I'm really happy with how it came together. "Sword & Pine" is a name we've kind of bandied about for years unofficially (it's a Twin Peaks reference)—we decided to bust it out on this, so we could start separating our instrumental stuff from the material we're releasing as Louis Mackey & Dr. Quandary, where he raps and I make the beats."


"I sent the stems of this to [Quandary] a while ago. I couldn’t get the tempo or the resolution right. He lowered the tempo, re-arranged the sh*t out of it, added vocals layers, more samples, harder percussion, and now, you have what you hear. One of my favorite tracks on the album and I can hardly lay claim to a bulk of the production."

"I made that beat probably 10 years ago as a remix for Nas' "Hate Me Now." Everyone who ever heard the remix, wanted that beat for themselves—at least two other rappers did full songs to it. However, I too being a territorial rapper/producer, wanted a piece of the action, so I hopped on it and asked Nex Millen, my long-time homie from Philly, who is a DJ/producer/emcee, as well, to dice up Nas' vocal for the hook to keep the vibe going from my original remix. When Quandary reached out to me for a submission to be included in the final World Around compilation, I thought "Alive & Paid" would be dope because it's a bit aggressive and braggadocious. My previous contributions to World Around compilations were usually contemplative and subdued, so I thought it would be better to go out with a bang!"

"Well, World Around reached out to me a while back about doing a song or two with them, actually it was Kyle, and so we did a track—not even sure which one. Then, we did a little remix for a [Humpasaur Jones] and Louis Mackey track that turned out really dope. I ended up asking if they'd carry an EP I was working on called Yonder Works (And Then Some), which they obliged. They did artwork, mastering, all that Jazz. So, when they asked if I'd do a track for the final comps. of course, I agreed. Awesome dudes over there. They genuinely just want to help artists get some more recognition. I already had the track made, but the Jazzy, fuzzy tone of it kind of fit what we'd done in the past and it seemed like a nice, positive-sounding beat to use as a send-off. So... there it is."

"This beat, "Funnel Cake," was made after a drive back from one of my NYC music trips. I had thrown in one of my favorite Beastie Boys CD's, Paul's Boutique and one thing that always catches my ears with that CD is the fact that there are so many changes in the drum sounds throughout the beats. This one isn't so drastic, but it's from a batch of tracks I did where the verses and hooks etc. have different drum sounds or breaks being used. Another one from that same night is: "DecibLoops" from Millennium Jazz Music's Take 5.2 with Dave Brubeck remix comp. and you can hear I threw in the Beastie Boys sample shout out haha. Thanks again for the support!"

"What I got from Kadmon: "Haha, [well] thanks, I'm glad you (World Around) will put it out there for those weirdos even in a weird community—I think that's romantic. Makes me smile." He went on to comment that he's always liked the mellow attitude we have in respecting his approach to music: "I love the loose track format most, I've never loved Hip-Hop more than exchanging loose tracks.'"

"Re: Kadmon,
The dude is a legit mystery. Lou [Mackey] is probably in touch with him the most regularly and even that is Hella sporadic. Every now and then, he'll send us a whole bunch of songs, running the gamut from instrumental piano pieces to self-harmonized Doo-Wop quartets to Lo-fi Hip-Hop masterpieces, most of them never more than two minutes long. When we reached out to him about the compilation, he hit us back with about a dozen songs—as usual, they were all dope, bizarre, and experimental. We chose "Love You" because it's kind of a rarity for Kadmon to work with samples these days and it was the best fit for the overall vibe that was developing for the compilation. That's about all I can tell you."

"Matt [Fire aka Elder Orange] hit me with the parts of this (he’s the real architect of the piece) and I laid the drums over it. It’s on some Piero Umiliani, Amalfi Coast, only-see-the-beauty-in-a-terrifying-world type steez. In my opinion, it sits in your brain like a glass of Veuve."