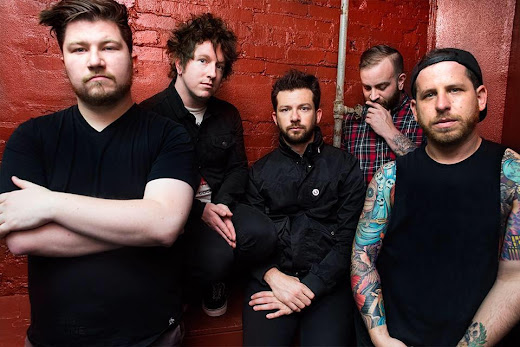 So, through the process of putting together this weekly Guts of The Ice column over the past few months, we've reached out to all sorts of musicians, fellow fans, Punk/hockey enthusiasts, etc. Such interested parties have provided us with potential leads, additional bands to cover, information, factoids, and much, much more. Two people we've dealt closely with through the publication of Guts of The Ice are Peter Marullo & Jeff Berman, who currently play together in Protagonist, a band signed to ex-Less Than Jake drummer Vinnie Fiorello's Paper + Plastick imprint. Marullo was recently described to me by Jeff Berman himself as a "THE biggest Boils fan and historian," as well as his best friend. Additionally, Peter Marullo functions as the manager for Berman's solo project, Divided Heaven. Jeff Berman, a long-time fan of The Boils, as well, was, actually, in the band from 2001-06 and played on TKO Records' "second" version of Pride & Persecution, The Boils/Last Target's Nobility & Nihilism split CD (2003,) and final full-length album, From The Bleachers (2005.) So, considering both Jeff Berman & Peter Marullo's long-time fandom and continued involvement with The Boils, we thought it would be fun to have them put together a Boils/Hockey Punk-centric playlist for Guts of The Ice. Below, you'll find Peter & Jeff's 15-track playlist, along with breakdowns they wrote for each selection. Protagonist's latest release, Fallout from The Chronicle, is now available on Paper + Plastick and contains three Boils covers, a Violent Society cover, and a couple acoustic cuts.


Peter Marullo from Protagonist and Jeff Berman from Divided Heaven (ex-The Boils) put together this playlist that celebrates The Boils! And Hockey! But mostly The Boils! Enjoy!

Truth be told, when Greg Boil showed me some of his new songs that would become [The Boils'] From The Bleachers, I was hesitant. Greg told me that he wanted our new record to be "fun" and not so "serious." Yeah, the new record would have the socio-political songs The Boils were known for, but Greg wanted the record to have a dynamic and diversity, even if some of the songs were about sports. Bridging that gap, for me and Greg, took some adjusting, if I remember correctly. I think, "Blood On The Fields" best exemplifies everyone's strengths and reminds me of the band's power and collaboration.

Green Day played this song at The NHL All-Star Game earlier this year. When Green Day tap into their Garage Rock vibes and mix in some dirty, they are so f**king fun.

I recall Dave Sausage riffing this song for years. I took great pride in adding the pre-chorus, the chorus, the solos, and having them stick. This song just worked, ya know? Mike [Bardzik]'s drumming is superb and Greg turned this into a hometown anthem like only he can do.

When Greg showed me the demo for this song, it surprised the Hell out of me; it was like The Boils giving Rancid a run for their money! A favorite of mine off From The Bleachers.

Greg Boyle is a genius and a great song-writer and this song may be his finest hour; blistering, stinging, eloquent, intelligent, catchy, powerful, and brave.

Protagonist's take on the classic Boils ripper from the greatest split 7-inch of all time.

A song about friendship forged in/through the flames of Punk Rock. Joint effort. Teamwork at its finest.

Can you get any more Guts of The Ice than The Trouble covering their home town heroes, SLAPSHOT? The embodiment of Punk, Hardcore, and hockey. Back when music was still dangerous.

A before you hit-the-ice must-have to reinvigorate the blood in your veins and the samurai spirit to don the proper war face, as you are about to meet your enemy on the ice, the enemy who will fall.

If you've never heard this tune, you will soon be chanting it, as you carry the head of the opposing side's head goalie. Victory!

The spiritual and much harsher successor to The Boils say it all in the title on this one.

Both will run through the streets of the city on the night of The Championship.

The best rendition of this traditional Irish tune could only be done with the swagger of New Jersey's Punk/Rock "N" Roll heroes, THE HUDSON FALCONS.

If I was a professional hockey player or a professional wrestler about to face off against my opponent in the squared circle... this track would be my "Eye of The Tiger" and in that instance, there would be no chance to face defeat.