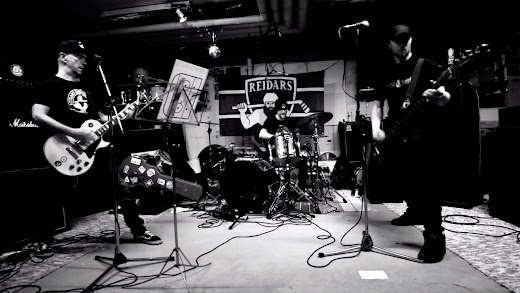 Upon publication of our extremely well-received Guts of The Ice ##6: Two Man Advantage's Spag Shares Hockey Punk Records accompanied by Drunk Bastard's own HOVID-69 (Hockeyvirus 69) Playlist, we noticed a Comment that piqued our interests, to say the least. It read: Great post! Here's our brand new Hockeycore band... and our first music video," with links to Bandcamp & YouTube pages all credited to Offside Reidars. Needless to say, we don't always, admittedly, see such Comments posted to The Witzard right away... but, coincidentally, soon thereafter, @spag69 posted a Comments of his own on one of Offside Reidars' Instagram posts, which read, "Check it out Puck Rock from Finland @sharpcheddar856." So, with Spag's stamp-of-approval, I knew I had to check these guys out and soon "skated" into @offsiderediars' DM's on Instagram. OFFSIDE REIDARS are a self-described "Beerleague Hockeycore" band hailing Rovaniemi/Lapland consisting of three players from legendary beerleague hockey team, Reidars: lead singer/guitarist Jari Mikkola, bassist/vocalist Juha Tuiskuvaara, and drummer Jari Körkkö. Mikkola says, "COVID-19 ended the hockey season and our beerleague way too early and that sucks, but our band's first mini-LP is coming out soon... and we're really excited about that." OFFSIDE REIDARS' self-titled mini-LP will be released digitally and limited edition 12-inch vinyl Friday, May 29, 2020 on Hiljaiset Levyt/Roku Records. Below, you'll find our comprehensive interview with OFFSIDE REIDARS' Jari Mikkola, along with the world premiere of "Game Day."

Jari Mikkola: I have enjoyed watching hockey since I was a little kid, five or six. I have, also, played hockey since I was a little kid, but I never played in a club or team. I've always played outdoors, "pond" hockey, or whatever you call it. In Finland we call it "beanie" hockey because outdoors, you rarely wear a helmet; the original and, probably, the best form of hockey. I got into Punk Rock around [the] late 70's-early 80's. My older brother was [into] first generation Punk in [the] late 70's, so I heard most of the stuff really early. For me, the whole Punk thing started seriously with Dead Kennedys, The Exploited, Bad Brains, Discharge, and from Finland, Lama & Terveet Kädet. But never forgetting the earlier greats, The [Sex] Pistols, The Clash, The Ramones, etc. The energy of Hardcore Punk was, and still is, really addictive. I started my first Punk band, Aivoproteesi, in 1982. I have been in bands ever since, touring all over Europe and releasing records. None of the bands have been mainstream or very "commercially successful" ...it's always been more about lifestyle and attitude. I think, it's more or less the same with the other guys in our band. We are all old Punks and have been in various bands. Except the other two are 10 years younger that I am haha. I think, our bass player, Juha, played hockey in a real junior club for some years as a kid. Bands we have been in include Aivoproteesi, Greenhouse AC, Yhteiskunnan Ystävät, Polttoitsemurha, Desert Planet, and Los Mogulos.


02. What made you decide to combine hockey and Punk/Hardcore stylings through music?

Mikkola: It was my idea to start this band and it came quite naturally. Why not combine the two of my favourites: Punk and hockey? And in my opinion, Punk Rock, or Hardcore Punk, is the "musical" equivalent of hockey. Fast, sweaty, and [adrenaline]-filled. I introduced the idea to two of my beerleague teammates, guys that I knew were Punks and musicians, in May 2019 at our hockey team's season ending party, so we are a "new" group. We all play in a really cool beerleague hockey team called Reidars. We have a lot of musicians and media professionals [on] the team. We have always done game advertisements and funny videos, acting like a real professional team, but mostly just online (our website and social media) and just to have fun. I've made the music for most of our team's videos and that, also, guided me towards the idea of starting a hockey-related Punk band.

Mikkola: Well, so far, we have only released two songs, "We will remain!" & "Gamesaver" on Bandcamp (and most of the streaming services.) We, also, made a music video for both songs, you can find them on YouTube and Facebook. Our first physical release is coming out soon; it's a 12-inch vinyl with eight tracks. The tracks will be available, also, on streaming services. We are really pleased how it all took form finally... the songs are good, the production is good, and it's on vinyl! We are, also, releasing a new music video when the record comes out.


04. Aside from your own band's music, what other hockey-themed groups, releases, singles, etc.would you recommend, as well?

Mikkola: D.O.A.'s Kings of Punk, Hockey & Beer definitely. Anything by The Hanson Brothers or SLAPSHOT. I was on tour with Nomeansno in [the] 1990's with my previous band, Greenhouse AC. That's the first time [I] heard about Hockey Punk (i.e. Hanson Brothers.) The term "Hockey-core" we found on a 7-inch EP from 2000 by a Finnish band, Rebound.

Mikkola: We are very active at the moment, but we don't have any major plans. Our band has not played any gigs yet, so that might be happening in the future (when this damn virus thing is over!) Let's see how it goes. If the album goes well, that might give some directions to the band. We will [always] play hockey, that's for sure! Here are more links: Facebook, Instagram, and Vimeo.


06. So, what can you tell us about your upcoming debut mini-album/EP you've been teasing on the @offsidereidars Instagram page in recent weeks?

Mikkola:We started to write the material last summer and our first "goal" was to release a 7-inch vinyl single as DIY without any label. But we just kept on writing songs, as they came out quite easily, and, then, we thought of a 4-track EP. But more songs kept on coming... we would have, probably, ended with enough material for a full album, but we decided that eight tracks on a 45 RPM 12-inch vinyl is the best format. Mini-LP's are usually great... all killers, no fillers. All the songs on the record are simple, good Punk/Hardcore Punk songs with influences from all the good Punk we have liked and heard in nearly 40 years. The lyrics are little stories from a (beer league) hockey player's point of view, small scenes and situations that we have experienced or, at least, felt. And not forgetting the Punk attitude in general, you know, f**k the system and all the idiots haha.

We started the recordings at our rehearsal basement [in] early January this year. Our bass player, Juha, is quite experienced in recording. All tracks were recorded in five sessions. Then, I did the mixing, I have, also, some previous experience on that. After mixing, we decided to hire a real professional for mastering. And, then, we idiots realised that this whole thing, probably, needs some financing... we contacted some old friends, who run small Punk/Indie labels, played them the material, and two of them decided to participate. So, it will be a joint release with Hiljaiset Levyt & Roku Records. Basically, it's still all DIY, the labels came in so late; but without them, we would not have a 12-inch mini-LP, probably, just that single... so, eventually, [it] all turned out really well.

Except for this virus thing, it ruined one part of the original plan. Our hockey team, Reidars, has played every spring for years a hockey tournament with like-minded beer league teams participating from all over Finland. The tournament is called [the] "Rockhockey SM" Tournament (SM stands for "Finnish Championship" in Finnish [abbreviation], not what you think...) Our original idea was to sell loads and loads of the vinyl at that tournament to the drunken players of other teams... but as all events this Spring, [our] tournament was cancelled. Damn. But, luckily, the labels that are now releasing the record have quite good distribution, also, I think, we can get records away from our hands anyway.

Posted by Matt Horowitz at 7:55 AM