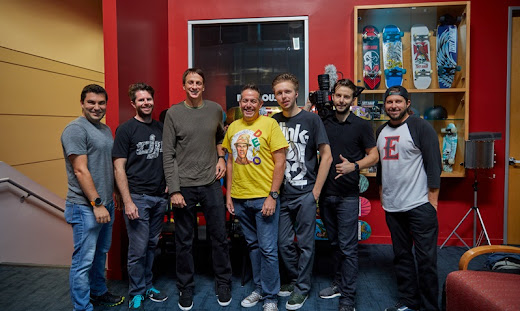 Last week, Activision announced their plans to release a re-mastered version of their wildly popular video games Tony Hawk's Pro Skater (1999) and Tony Hawk's Pro Skater 2 (2000) together, packaged as Tony Hawk's Pro Skater 1+2. Affectionately known by fans as THPS, this beloved game series birthed THPS 1-5, Tony Hawk's Underground 1-2, American Wasteland, Project 8, Proving Ground, Ride, Shred, HD, and more between 1999-2016. My sister and I, personally, "owned" (well, our parents bought us) THPS1-4, THUG 1-2, and American Wasteland for our N64 and it was a major part of my childhood. Plus, Tony Hawk's Pro Skater's in-game soundtracks played a huge role in my musical exploration as a youth and even as an adult. Last year marked 20 years since the original THPS game was released, which spawned a whole series worth of games, as well as like-minded spin-offs Mat Hoffman's Pro BMX 1-2, Shaun Palmer's Pro Snowboarder, and Kelly Slater's Pro Surfer.


It was the first time I had ever heard of artists such as Black Flag, De La Soul, Del The Funky Homosapien, Iggy & The Stooges, Jurassic 5, Madlib/Quasimoto, MF DOOM, Mos Def, Public Enemy, and more, which I still listen to and enjoy to this day. We recently heard about an upcoming documentary entitled Pretending I'm A Superman: The Tony Hawk Video Game Story or simply "THPS Film" for short. Pretending I'm A Superman's site describes it as an "independently produced documentary in association with Steve Berra & Eric Koston's own The Berrics. Former Neversoft producer Ralph D'Amato and award-winning Swedish director Ludvig Gür teamed up in 2016 to create a film about the game that defined a whole generation." Pretending I'm A Superman tells the story of Tony Hawk, his skater buddies, and developers who came together to create the best-selling game, as well as a look into how skateboarding became a part of mainstream society.


THPS Film has been making its rounds on the film circuit/screenings for a while now and it appears as though its wide release may have been delayed, like just about everything else, due to COVID-19/Coronavirus. We've been communicating directly with the documentary's producer and ex-Neversoft producer Ralph D'Amato, who worked on a handful of the THPS games, for quite a few months now, via email. D'Amato was kind enough to select some of his personal favorite songs from the soundtracks for THPS 1-4, THUG 1-2, American Wasteland & Project 8 for our ongoing With The Quickness curated playlist series. Ralph D'Amato's playlist features shred-worthy selections from the likes of Goldfinger, The Distillers, Flogging Molly, The Clash, and Rancid, as well as his own band, Dead End Road.


Now, don't get me wrong, growing up, my friends and I were definitely "outside kids," but every night, weekend, or rainy day, we were inside playing Tony Hawk's Pro Skater; spending countless hours perfecting our tricks, being exposed to new music, going to Action/Extreme sports events, and, actually, learning how to skateboard in real life. So, taking inspiration from Ralph D'Amato, I decided to put together a 55-song playlist consisting of my favorite songs from the THPS titles I "owned" as a kid. You can find both Ralph D'Amato & The Witzard's Tony Hawk's Pro Skater-inspired playlists embedded above and below. Pretending I'm A Superman: The Tony Hawk Video Game Story is coming soon to digital streaming platforms, via The Berrics & D'Amato Productions. Tony Hawk's Pro Skater 1+2 will be released on Friday, September 4, 2020 for PS4, Xbox & PC.

Posted by Matt Horowitz at 9:31 AM