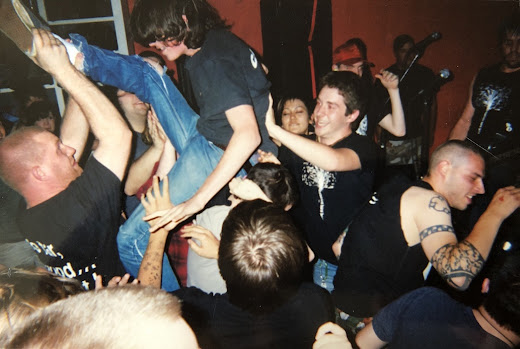 Knife Hits Records is an independent Heavy Punk music imprint based in Philly. Their current roster includes Low Dose, Rid of Me, now-defunct Fight Amputation (or Fight Amp,) Günna Vahm, Plaque Marks, Lesser Light, Hulk Smash, and Arcadius. In fact, Low Dose, Rid of Me, Plaque Marks, and Lesser Light feature ex-members of Fight Amp. Knife Hits is owned and operated by Mike McGinnis, who plays/played guitar in Fight Amp, Low Dose, Plaque Marks, and Rid of Me, as well as Pale Shelter. Knife Hits was founded in 2004 as "an off-shoot of the Sludge Punk band FIGHT AMPUTATION, the label was originally coined [as] a collective due to it's on-again-off-again habit of releasing various formats, it's communal nature of various entities chipping in to release music, and it's existence as a show/tour promoter from time to time," their website explains.

Although Fight Amp has been broken up since 2016, they're still fairly active on social media and we recently spotted a post n their Instagram page (@fightamputation) announcing something special: a commemorative 15th anniversary re-issue of Fight Amp's 2005 debut EP, Ugly Kids Doing Ugly Things, pressed onto limited edition gold/black cassettes. We decided to reach out to Knife Hits owner Mike McGinnis and Fight Amp co-founder to learn more about said Ugly Kids Doing Ugly Things re-issue. McGinnis was kind enough to answer some of our questions, which you can now read below in the form of a proper interview accompanied by some archival photos, as well. Fight Amp's Ugly Kids Doing Ugly Things cassette is now available for pre-order on Bandcamp with orders expected to ship on/the week of June 12, 2020.

I. Aside from it being the EP's 15th anniversary, what else prompted you to re-release Fight Amputation's Ugly Kids Doing Ugly Things now?

Mike McGinnis: I had, actually, planned on doing this project when Fight Amp was still an active band, I think, in 2015 or 2016. Our last album, Constantly Off, had a cassette version and the person that made them did a great job. So, I put a new master and artwork together, put the order in with the same person because we had a rapport, paid a deposit, and waited. And waited... and got strung along, until I talked to other labels in the same boat and realized we had all been ripped off. I attempted some things to recover the funds, but the person disappeared. The lost money and, then, Fight Amp ending soon after derailed the project. The sad part was it was intended to start an entire series of cassette re-issues for every mainline Fight Amp album chronologically. But, now, being stuck under stay-at-home orders during COVID-19 and having time to focus got me motivated to make it happen again. So, here we are and it's been a fun project to gather and share old videos and photos from the era. I'm excited to get to the next release.

II. What can you tell us about Ugly Kids Doing Ugly Things' album title and accompanying artwork?

McGinnis: The album title was just a tongue-in-cheek response to people's perception of the band and our friends, at the time. We were typical sh*theads from the "wrong side" of the tracks known to cause trouble. The stories weren't always true, though, but, yeah... we were the ugly kids doing ugly things. The artwork was painted by our friend, Doug Foulke, and... I'd have to let him speak to the meaning behind it. I'm sure it was influenced by some kind of mind-bending substance.


III. So, what differentiates this re-issue of Ugly Kids Doing Ugly Things from the 2005 versions on Knife Hits & Iron Age?

McGinnis: The 2005 original release was championed by one of our best friends, Kevin Campbell. He worked together with the band, as [well as] Knife Hits, and we released a 7-inch as the first ever "true" Knife Hits release that wasn't a demo tape. People liked it, so we worked together with a fan of the band, Ravi Binning, and his label, Iron Age Records, to do a CD version. The newest re-issue is cassette/digital-only. If enough demand were there, I'd consider a new vinyl version, maybe, a 12-inch at 45 RMP, but it's hard to say how much people want an EP from 15 years ago by a band that isn't active anymore.

IV. What were some of Fight Amp's biggest sources of influence and inspiration while recording Ugly Kids Doing Ugly Thing?

McGinnis: A wide array of music for sure, but we were definitely pulling from multiple heavy sources and wearing it on our sleeves: The Melvins, His Hero Is Gone, Deadguy, From Ashes Rise... and a lot from the [Northeast] Heavy Punk scenes, like PG. 99 & Orchid. We definitely weren't trying to sound like anything specifically, though, myself and most of the people I've written alongside have always written what comes to mind and worries about the influences after the fact.


V. How did Fight Amputation link up with then-unknown producer/engineer Will Killingsworth to record Ugly Kids Doing Ugly Things back in 2004?

McGinnis: Speaking of influences, I recall Bucket Full of Teeth & Orchid being big influences and that's why we recorded with Will. We wanted something raw, but with clarity, which, I think, is exactly what we got.

VI. What's next for your post-Fight Amp bands Low Dose, Rid of Me & Plaque Marks, as well as your label, Knife Hits Records?

McGinnis: Rid of Me is my most current band with Itarya [Rosenberg] from Low Dose and the second Fight Amp drummer, Mike Howard. We just released a tape and had a tour planned with Soul Glo (I'd be on it right now) but COVID chopped that one down. We're currently writing and demoing for an album and we have a limited vinyl release planned for the cassette songs with bonus tracks soon. Plaque Marks is my other current project and we have an entire album finished and mastered and ready to go. We were planning a Fall release and a European tour, but, again, COVID is making a lot of that unknown, so we'll just have to wait and see what the next few months look like.

Low Dose was on a bit of a hiatus to focus on other projects and personal lives, but, again, with COVID-19, that will definitely be extended into an unknown amount of time, so nothing planned, as of now. Though, we did have a couple new songs I'd love to get recorded eventually. As far as Knife Hits, since I'm a two-bit operation, I just take it one release at a time. Since Ugly Kids is selling well, I'd like to move onto the next Fight Amp tape re-issue next and if that does well, I'll continue down the line chronologically. And if they all do well, I'd like to take the funds from them and, actually, put out a band that isn't my own.

Posted by Matt Horowitz at 8:10 AM