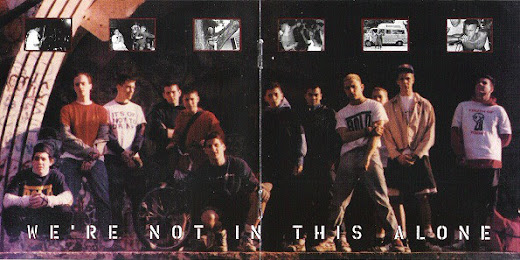 Youth of Today - We're Not In This Alone CD Booklet (Revelation Records, 1997)

Youth of Today (YOT) are a Straight Edge Hardcore hailing from Danbury, Connecticut/New York, New York and originally active from 1985-90, 1994, 1999, and 2003-04. Founding members Ray Cappo & John "Porcell" Porcelly re-formed YOT with bassist Walter Schreifels (Gorilla Biscuits, Quicksand,) and drummer Sammy Siegler (Side By Side, RIVAL SCHOOLS) in 2010 and have been moderately active ever since. Youth of Today are oftentimes credited with helping establish the "Youth Crew" sub-culture of Punk/Hardcore, along with popularizing both straight edge and vegetarian/vegan lifestyles. YOT's seminal albums Break Down The Walls, Can't Close My Eyes, and We're Not In This Alone all released between 1986-88 on Wishing Well, Positive Force & Caroline Records—all of which have since been re-released on Revelation Records—are critically-acclaimed, widely-beloved, and helped shape the genres in their earliest aughts.


Youth of Today's most recent release, a 7-inch titled "One Night Stand," was issued by Revelation Records for Record Store Day 2019 in a number of multi-colored variants. It was, seemingly, recorded in 1989-90 and features a cover designed by Sammy Siegler in homage to both The Partridge Family's David Cassidy and Sex Pistols' "God Save The Queen" 7-inch. Youth of Today are still actively touring (well, not currently) and, fingers crossed, still recording music together, but today's feature harkens back to a fan favorite lifted from 1988's We're Not In This Alone. So, "legend has it," Sunny Singh at hate5six recently acquired a VHS master copy of YOT's "No More" music video directly from Dave "Sausage" Walling (The Boils, Damage, Blacklisted) at Six Feet Under Records. "Youth of Today's 1988 "No More" was one of the defining moments that brought vegetarianism, veganism, and Animal Rights into the Hardcore community discourse. This music video, directed by Dan Nicholes, is cited by many as the catalyst for re-thinking their place in the food chain," Sunny Singh wrote on Instagram & YouTube. 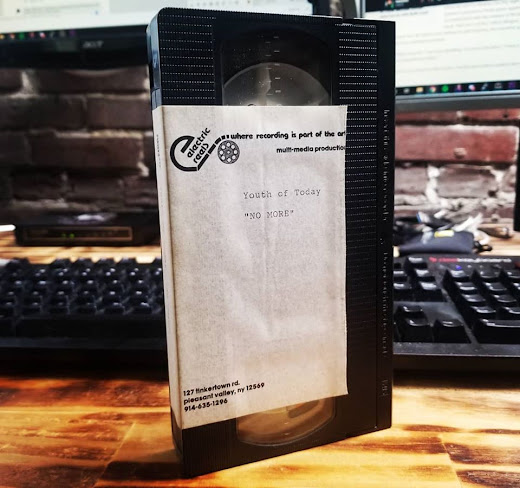 "While this video has circulated on The Internet for many years, to my knowledge, this is the first and only direct-from-master digital conversions in existence. I was told only five copies of this tape were made: one was sent to Sally Jesse Raphael, one to Phil Donahue, and this is a third that recently ended up in the hands of Dave Sausage from Six Feet Under Records, who, then, allowed me to digitize and restore the footage," Sighn continued. Adding that "this is truly one of the craziest [Hardcore] artifacts I've been able to work on." We've recently exchanged emails with Sunny Singh directly, one of which you can read below in mildly edited form. hate5six's newly restored and re-mastered edit of "No More" is now available for your viewing pleasure on YouTube. Youth of Today's back catalog is available directly from Revelation Records in a number of formats, as well as digital streaming platforms.


"Dave [Sausage] acquired the tape from a friend, who won it off eBay in '97 or '98. Dave reached out to me a few weeks ago about wanting me to digitize/restore/upload it. He stopped by this past Monday and I ended up converting it the same day. I spent a few hours working to clean up the footage. I was, initially, going to leave it as-is to be true to the media, but opted to re-master. This involved EQ'ing and compressing the audio and using iZotope RX to remove some of the high-end hiss that is present in VHS. I, also, removed some of the visual VHS artifacts using NeatVideo and by applying some sharpening. VHS tends to experience upwards of 20% signal loss due to magnetic remanence decay after one or two decades, so the fact that this tape from 1988 came out as clear as it did was a blessing." 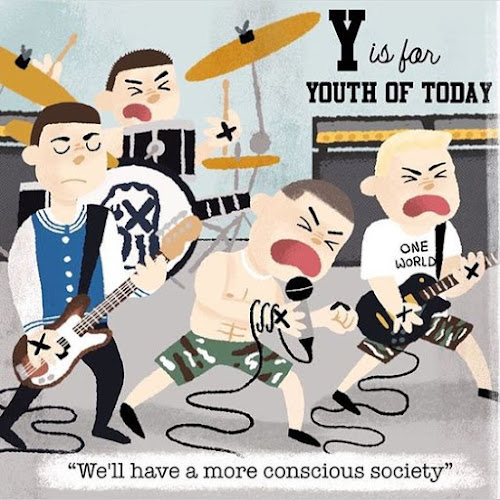 "Y" is for Youth of Today from ANOTHER PUNK ABC BOOK (SOURCE: @hecreative)
Posted by Matt Horowitz at 9:51 AM