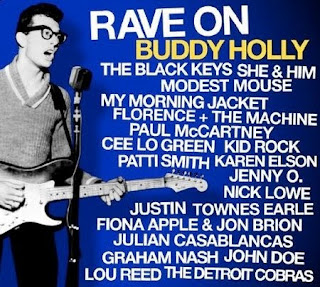 Buddy Holly tragically died in a 1959 plane crash at the young age of 22... Yet he managed to unleash 3 albums during his lifetime, as well as collecting roughly 10 years-worth of "new material" (released posthumously). Even though his "career" only lasted about 1 year, Holly is often credited as one of the pillars of [early] Rock 'N' Roll and electric guitar work.
The good people over at Fantasy Records/Concord Music Group culled through Holly & The Crickets' plethora of Decca (Brunswick/Coral) output, assembling a tribute album of covers. The contributors housed within Rave On's 19 tracks are varied and many. Peruse through the tracklist - conveniently featured below - and pick up the collection on June 28th.