Surf's Up with GOON$ OF DOOM! 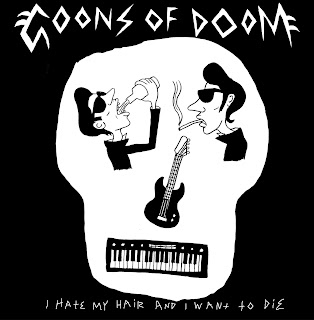 "We were making a surf movie about us being a band - ["Doped Youth"]. So, we bought all the instruments and stuff. We'd been playing our instruments for 5 days and we had a gig at a party. We were ridiculously bad... We were really nervous and we sucked. And then we had another one the next week and just kept going. One tour, we did about 30 gigs in six weeks and after that we were like, "I guess we're getting pretty good." We've since played Tokyo, Hollywood, and were hoping to go to New York this year [2005]. We take it seriously but in a fun way."


The Volcom Surf Team rider banded 3 with childhood friends and "1 sexy Czech blonde girl" - Cut-Throat Cowboy, Vaughan Dead, Killa Whale, and Bang Bang Bunny Fang... to form "Goons of Doom." Wright's own AKAs include: [Fang Fight Right] The Wizard of Death, Oscar Billy Pippen Wright, and Ozzie Wrong.
The Australian-based collective is also signed to Volcom Records. Between 2005-06 "The Stone" let loose their first 2 releases - Bikey Zomby EP and The Story of Dead Barbie & Ghost. The Goons' sophomore album, I Hate My Hair and Want to Die, was then released in 2009.
Adequately described as: "Songs and sounds of pirates and adventures and romance on the clipper... Immortalized for the hip set, the lonely loser, the sentimental soul and, gutter trash fucks alike." - 3 video-singles were released from I Hate My Hair... ("Beer Money," "For a Girl [F.A.G.]," and "The Slapper"). With some perusing, the trio of videos... as well as a gaggle of others, can be viewed on YouTube. 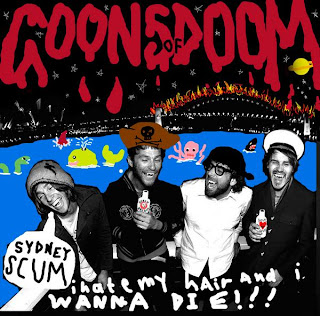 Posted by Matt Horowitz at 8:59 PM