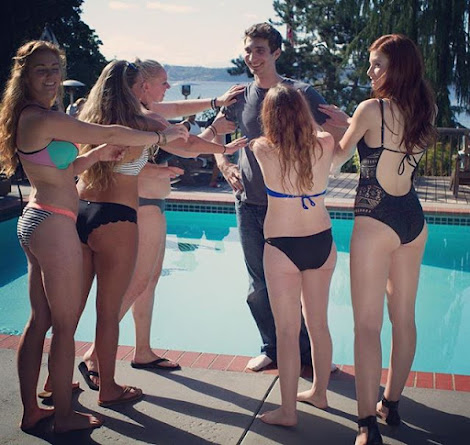 "Hi there, my name is Steven Curtis. I'm a musician based in Seattle, Washington with a decent local following going. I recently released a video that reached over 200,000 views on Facebook. I performed with a loop pedal at Robert Lang Studios, which have worked with Nirvana, Foo Fighters, Macklemore, Train, Linkin Park, Kenny G, and more," read a recent email from self-described Seattle "singer-songwriter, guitarist, producer, looper, performer," and Alex Hager affiliate Steven Curtis. "With just a microphone, loop pedal, and a guitar, Steven takes the stage and blows the crowd away... in the summer of 2015, Steven did over 100 shows. 2-3 shows a night just to get his name around Washington; now, he's starting to trend everywhere, [recently] reaching over 1,200,000 views on Facebook doing a cover of "Candy Shop" by 50 Cent. Steven's hard work and dedication has given him a steady following and supportive fan base," Curtis' on-site Bio continued. For those who may not be fully aware, a loop pedal is defined by Not Playing Guitar as: "a guitar loop pedal records short passages played on an instrument and plays them back in a repeating loop. Loops can be mixed together to create complex rhythms and harmonies from layers of simpler parts. Usually, a loop pedal is used to create a backing that you play along with," as Steven Curtis effortlessly does throughout his Robert Lang Studios-recorded original compositions "Ocean," "Bad Company," and "Everything."

"'Bad Company" was [written] about a girl I was really into a few years ago. But every time I finished hanging out with her, I just felt gross and felt nothing good came from it. I somehow felt worse after hanging out with her, knowing she wasn't good for me to pursue dating. The song only took 45 minutes to write. I was surprised how everything came together so fast, when I was letting out my emotions. Surprisingly, she's been one of my best friends for years now, haha!"

Steven Curtis readily cites fellow singer-songwriters and guitarists John Mayer, Jason Mraz, Ed Sheeran, and Jon Bellion as his greatest sources of influence and inspiration. "Steven Curtis has a great voice, you can't learn to write songs and melodies like that, you have to be born with it," Everclear frontman Art Alexakis gushed about his one-time touring mate and opener. Steven Curtis candidly describes electrified acoustic romper "Bad Company" as "a song about liking a girl for all the wrong reasons and watching the entire series of Prison Break on Netflix," which is progressively multi-layered, not entirely unlike a sample-filled Hip-Hop track, until its triumphant John Mayer-esque meandering guitar solo at roughly 4:08; "Ocean," on the other hand, is "about fighting for your dreams and what you believe in, no matter how small the chances look. "Yes, I'll fight for my dreams and my pride—that tsunami will never take me alive.'" "Steven Curtis is two steps ahead of everyone and I guarantee, he's on the road to success," Robert Lang Studios founder and namesake Robert Lang firmly attests. It's currently unclear as to whether or not Steven Curtis is busy working on a studio album, concise EP, or live album—although, he currently has "Bad Company," "I'll Be Here," and "Fall," as well as both studio and live recorded renditions of "Ocean" uploaded to his personal Soundcloud profile for your streaming pleasure!