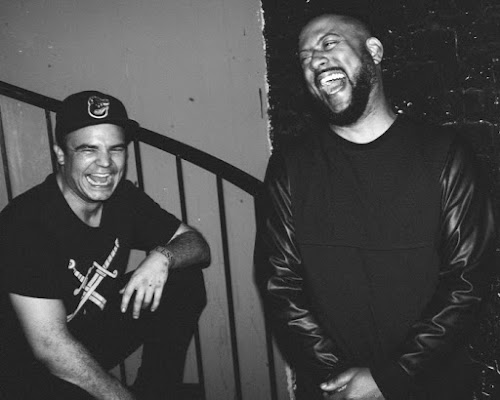 It's really no secret, at this point in time, that Future Islands frontman Samuel T. Herring moonlights as Socrates & Locke Ernstfrost-referencing greenhorn emcee Hemlock Ernst. "17 years in-the-making, Hemlock Ernst finally got pressed to wax. Thanks to @madlib and @nowagain for making my childhood dreams real," read an impassioned @futureislands Tweet posted on the heels of Sam Herring's official Madlib-produced debut EP, Trouble Knows Me; although, he professes he's been rapping since the 9th grade (around 1998), Hemlock Ernst's first recorded appearance "on wax" was as recently as 2010 on Rapdragons' Baltimore-minded "Gotta Go." He's since rhymed alongside The Alchemist & Oh No (Gangrene), Scallops Hotel, Curse ov Dialect, Milo, Busdriver, Cavanaugh, Open Mike Eagle, Scoop DeVille, Fat Tony's Charge It to The Game, and most recently critically-acclaimed artists, BADBADNOTGOOD & Clams Casino.

While he still has yet to release his proper solo "debut" as an emcee, it appears as though Sam Herring is slowly gearing up to unleash some sort of project, as he recently enacted Hemlock Ernst Soundcloud and Instagram accounts; said Soundcloud page houses a large chunk of Herring's scattered Hemlock Ernst discography, as well as an active link to his newly-launched HEMLOCK ERNST site, and a four now month-old freestyles: "Mazatlan Flex Freestyle," "In The Land of The Cats" (free verse), "My Myopia Freestyle," and "Barzan Freestyle." I've been lucky enough to speak with the three talented producers behind these mysterious tracks individually—Butch Dawson, Chris ('i's') McCormick, and Butch Dawson, which I strongly urge you to read below, while we all anxiously await Hemlock Ernst's proper Trouble Knows Me follow-up?!!!??! Sam Herring himself told me last night, via Soundcloud message that "there's a few projects [Hip-Hop] in-the-works, but no plans anytime soon for releases. Just building things, as I go. Back in Future Islands mode pretty strong right now."

"In The Land of The Cats" (free verse): "It was actually quite an easy [collaboration] that came together. He liked a couple of my tracks on Soundcloud and I have been a fan of him for a couple years. [I] love all the features he has been doing with dudes like Milo, Busdriver, Open Mike Eagle, etc. so, I thought I'd hit him up with [some] tracks and we just kinda built from there; the beat from ["River Echo"] is the one that first hit him and that was basically it—just happened pretty natural. He said he will make [some] more stuff on those beats I sent him. I know exactly why he is doing what he is doing right now, but [I don't know] if I'm allowed to say anything haha, but basically, he has a Hip-Hop project dropping, at some point."


"My Myopia" Freestyle: "A few days after my last tape (secret places) came out, Sam hit me up and sent me the track asking if he could post it. I obviously thought it was great and gave my permission. His approach was really nice/humble—apparently, he had been a fan of my stuff for a while, which was kinda crazy. I knew his work with Madlib, but honestly, never made the Future Islands connection, since I'm not up on a lot of non-rap/beat music. My roommate was like, "hey, his main band is really awesome and pretty well-known!" I'm stupid. Anyways, hopefully, we'll put some more stuff out in the future... [I] just hit him with a batch of new stuff recently."

- all these fingers (AKA âtƒ)


"Mazatlan Flex Freestyle" & "Barzan Freestyle:" "Well, Sam is a big fan of my music and when I had dropped a 4-track beat tape over the summer called KIM, Sam bought it and rapped over some of the beats I had. He had asked for permission, even [though] I told everyone who bought the tape that you can rap over them, but he's very generous and chill, so he wanted to make sure it was OK... made this tape for my girl. But if you purchase, you can rap or sing on these b*tties!"