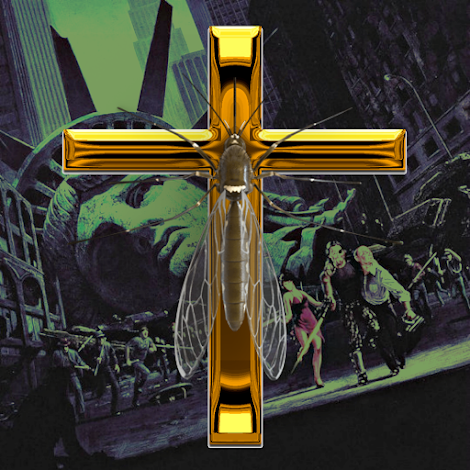 "I'd like to think of this album as more of a home-made mixtape you could burn to CD and give to Trick-or-Treaters. It's what I've been working on the past few months; music is a labor of love. I love releasing albums and sharing them with my friends and I intend to never stop. Put Down The Candy & Let The Little Boy Go! furthers that narrative. Maybe one day, I'll embrace my outer-adult to the fullest and find a real job. Til then, this is all I have," Evan Souza, better known as Darko The Super or Doc Heller, wrote within a message included along with his Trick-or-Treat-ready Haloween-themed mixtape. The Witzard previously premiered the mixtape's Dr. Dre & Snoop Dogg-inspired title track, which Souza says was dually inspired by Slaves' recent Mike D (Beastie Boys)-produced album, Take Control. Darko The Super clever re-appropriated a line pulled from Dr. Dre & Snoop Dogg's Eazy-E dissing "F*ck wit Dre Day (and Everybody's Celebratin')" and used it as "a metaphor for letting [his] childhood go and facing [his] fears of becoming an adult in the sense of what's acceptable by society's norms; trying to stop embracing [his] inner-child and focus on [his] outer-adult."


Put Down The Candy & Let The Little Boy Go! showcases 10 frantic genre-blending tracks—four of which ("Put Down The Candy..." "Milk of Magnesia," "Evan Threw Up," and "Spray Paint") were previously released over the course of the past month or so. Darko The Super drew inspiration and material for sampling from a wide array of sources including Horror film Kill List, Beck's "Corvette Bummer" & "Steve Threw Up," Drake's latest album Views, Devo's "Shrivel-Up," Small Professor, Facebook beat solicitation, Stoned Jesus, Portishead, Jimi Hendrix, Serengeti's Gasoline Rainbows, Deltron 3030, Michael Rapaport's 2006 film Special, and his girlfriend Alora. "Milk of Magnesia" is one of my personal favorite, almost Ol' Dirty B*stard-reminiscent, contained tracks, which Darko The Super fittingly described via email as: "For this track, I looped up the intro part of "Corvette Bummer" by Beck. I wrote the first two verses and the chorus after hearing the Beck song; the rest of it was cut-and-pasted from other unfinished songs I had written and never used. "Milk of Magnesia" was something I wrote in my notes to remember that I wanted to use it in a song somehow. I do that with a lot of phrases. It's also something old ladies who cheat at trivia drink." Put Down The Candy & Let The Little Boy Go! is currently available for just $6.66 (or more) at Darko The Super's own U DONT DESERVE THIS BEAUTIFUL ART label's Bandcamp page; make sure to grab a copy and "burn this to CD and hand it out to all the Trick-or-Treaters. I'm sure the little green ghouls will love you for it!"

Posted by Matt Horowitz at 7:05 AM