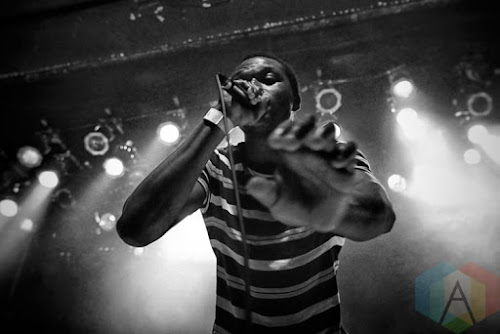 "No question! My objective for the song and why I named it "Bakkah" is because Bakkah refers to the Kaaba in Mecca, which is considered the "House of God," in a sense. In the song though, I'm referring to how people relate to one another as being our "house" that is faulty and shaky; barely standing, but nonetheless, is," Hamilton, Ontario, Canada emcee Emay (Mubarik Gyenne Adams) wrote within an emailed statement sent exclusively to The Witzard earlier today.

"This new song, "Bakkah: The History of Humankind," was initially just a poem about humanity as a whole. When it began to rhyme, I basically just ran with it. It was also a great opportunity for me to experiment with my writing, as I was always self-conscious about using a more poetic/metaphorical style of writing, so with this track I allowed myself to get completely lost in that form," Adams continued. "Bakkah" stems from his long-rumored Sinner, Song-writer EP (2014) follow-up, ILAH; "Bakkah" was preceded by a string of like-minded Soundcloud loosies "Beg II "For Madeena,'" "Tiers of Tears," "Israfil "angels trumpet,'" Chef Byer-produced "Blaow "That Hurts,'" and Gene One-assisted "Drench"—all, or none, of which may ultimately end up re-appearing within ILAH.


Upon hearing "Bakkah: The History of Humankind" for the first time, I almost immediately managed to liken Emay's feverish delivery to that of Yasiin Bey (formerly Mos Def) or G.O.O.D. Music President Pusha T; beaming with an "undeniable" sense of social consciousness and political urgency. "For the video, me and the director, Aaron Hall, bounced a lot of ideas off of each other and eventually, Aaron thought of using riot gear for the video. To me, the video is a battle displaying my ideological development and the conflict of ideas taking over and building off of one another," Emay wrote, detailing the concept behind "Bakkah." It's an odd, yet fitting, dichotomy and quite obviously, an intentional artistic decision for Emay and director Aaron Hall to feature a break-dancing robot within the companion video for a track subtitled "The History of Humankind." "My beliefs and ideas about the world are constantly evolving and developing; this isn't an over-night process, but one that takes a decade or maybe even a lifetime," Emay continued. Mubarik Gyenne Adams' soon forthcoming proper "debut" album entitled ILAH was proceeded by his Where The Wild Things Are-borrowing instrumental project Emay, Karen O + The Kids (2010) and critically-acclaimed Sinner, Song-writer EP (2014) with outsourced production work from Resolved Dissonance, Hut, Giraffage, Star Slinger, and Hallow Pigeons.
Posted by Matt Horowitz at 6:09 AM