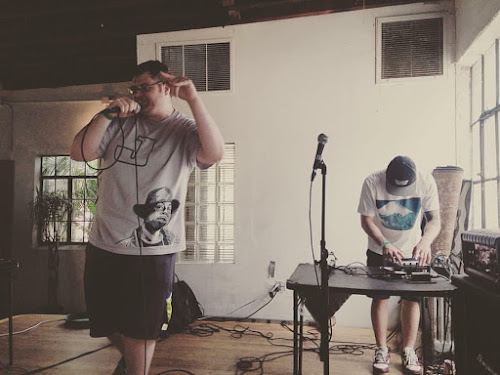 "I made the beat [last week]. It's the first beat I made actually playing everything through my MIDI keyboard. I usually never do that. It felt good to have something completely mine in a way. I was listening to the new Slaves album [Take Control] produced by Mike D of Beastie Boys, before I made the beat; maybe that inspired the sound," Darko The Super (Evan Souza) wrote within a recent statement to accompany his latest single and music video, "Put Down The Candy & Let The Little Boy Go!," which he was kind enough to let me premier right here at The Witzard! "Not too sure what the verses are about, but the chorus describes envying a friend and being dissatisfied with yourself because you're not in a better position like they are, but at least you know them. I wrote the lyrics while taking out the trash, getting a shower, and doing the dishes. I get most of my writing done doing daily tasks," Souza continued. Darko The Super additionally told me that "Put Down The Candy & Let The Little Boy Go!"'s title is a quote from Dr. Dre & Snoop Dogg's Eazy-E dissing "F*ck wit Dre Day (and Everybody's Celebratin')" wherein he's cleverly re-appropriating it as "a metaphor for letting [his] childhood go and facing [his] fears of becoming an adult in the sense of what's acceptable by society's norms; trying to stop embracing [his] inner child and focus on [his] outer adult." "Put Down The Candy"'s beat draws inspiration from Michigan-based Punk band The Spits, Beck's experimental second album, Stereopathetic Soulmanure (1994), and improvised Jazz and Noise artists signed to Already Dead Tapes, whom Darko The Super has "been lucky enough to play shows with and listen to;" already dead tapes & records have previously released Evan's Oh, No! It's Darko and Knox Overstreet.


"Pennsylvania-based human Hip-Hop experiment Evan Souza aka Darko The Super or Doc Heller, invites you to follow him on a bold and warped quest through aural space with his abstract music. Having collaborated with the likes of Homeboy Sandman, Mr. Muthaf*ckin' eXquire, Open Mike Eagle, Pyramid Vritra, Dudley Perkins, Lil B, [Charles Hamilton], and many others, this gifted lyricist is surely prepared to cause your mind to explode like Robot Santa being told a contradiction," reads Darko The Super's self-penned press bio. "Sure to leave your spine tingling, Darko & Doc are here to promote a change in society, positivity, love for all, and a break from the norm. He is set to leave his mark on the world as a disciple of the Bill Hicks' philosophy, "play from your f*cking heart," Souza enthusiastically continued. Darko The Super initially reached out to me about two weeks ago via Twitter, a friend of my frequent collaborator, John "Jumbled" Bachman, and in addition to his solo work as a rapper-producer and crafting beats for everyone from Homeboy Sandman to Lil B, Evan Souza runs his own label imprint called U Don't Deserve This Beautiful Art; "my latest release is a beat tape called Beercan, which I produced during a weekend at a campground in Kalamazoo. I have two recent Rap albums—my latest self-produced Take Me to Your Computer, as well as one using beats by Small Professor, Your Mouth Is Bigger Than Your Entire Brain. The latest album on my label is a new cassette from The Static Brothers, an Experimental Noise-Rap group from Philadelphia." Darko The Super says "Put Down The Candy & Let The Little Boy Go!" will "probably [end up] on an album of the same name," which I would assume will materialize in the not-so-distant future, judging by his rather rapid release schedule.
Posted by Matt Horowitz at 6:51 AM