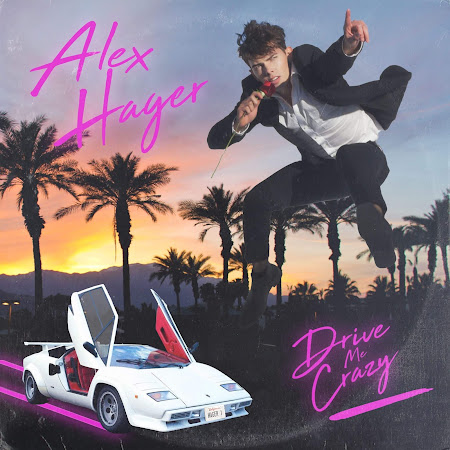 "'Drive Me Crazy" was filmed in two days in the greater Seattle area. It was filmed by my friend, Sam Akina, who is responsible for many of the Dell commercials you see on TV. Despite his serious experience, our wardrobe consisted of thrift store [finds] and the actors were my volunteering friends. Our concept was to create a music video in different Pop culture scenes, as if someone was changing channels on a TV screen," self-described Pop-Punk singer-songwriter Alex Hager hailing from Gig Harbor, Washington wrote within a recent stream of emails. "I was responsible for some of the more ridiculous ones, such as the soap opera and fragrance commercial scene. Our props were very low-budget and my buddy invited me to use his house as the set. It was the craziest experience ever and the greatest feeling, having my friends show up to star in my own music video. It’s awesome how everything came together," Hager continued; a wide array of colorful scenes, which include clever illusions to Full House, Buddy Holly & The Crickets, a 1930-40's silent film, campy 80's Romantic Comedies, cheesy soap operas, sultry Calvin Klein-esque cologne commercials, The Bachelor/ette, Sesame Street, and early 2000's MTV Punk Rock bands, such as Blink-182, Sum 41, and Avril Lavigne.


"Drive Me Crazy," which unfortunately, isn't a Pop Goes Punk-leaning Britney Spears cover, is 20-year-old Alex Hager's debut self-released single; "it was initially produced in Nashville with Daniel Grimmett & Christian Fiore. But it’s most worth mentioning Jordani Sarreal & Mark Simmons, who produced the final piece at Pacific Studios in Tacoma, WA." When asked what some of his greatest influences were while creating the track, Hager responded: "'Drive Me Crazy" definitely has been influenced by a few things; the most obvious, a girl. It’s a reminiscent story of my first relationship—about a beautiful girl who was jaw-dropping at every sight. Late one night when those nostalgic vibes kicked in, I typed out the verses on my phone. The chorus was actually from a different song I had been writing, but when I put them together, it gave the story a new life. As for musicians who inspire me, Blink-182 is probably the most obvious. When I was 14, I essentially thought I was Tom DeLonge. I [pulled] some riff inspirations from The Edge [U2] and Slash [Guns N' Roses] was the motivation to start strumming. While I admire all of them greatly, I feel like I’m paving the way to find a fun, radiant new sound!" "Drive Me Crazy" is simply a stand-alone single, but Hager is currently working on yet another new single and says he will likely have an album completed within a few months.
Posted by Matt Horowitz at 8:32 PM