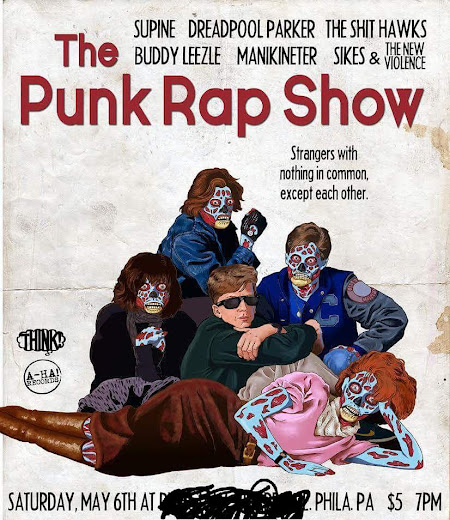 "Loud. Abrasive. Mental. Music; a four word preface into the sound of MANIK|NETER, the side-project of Carl Kavorkian. Bringing together the essence of various adrenaline-inducing genres, this Noise-Rap project is described as an evolving experiment in crushing drums, heavy sounds, manipulated vocals, and translucent streams of consciousness. Lyrically, putting less emphasis on "bars" and more concentration on stirring emotions and simply rocking the f*ck out. Live cats to the front, wall flowers to the back when MANIK|NETER hits the stage," reads a fragmented chunk of Philly-based emcee, producer, engineer, and DJ Carl Kavorkian's recent email blast. MANIK|NETER (pronounced: "Mannequin-Eater") is the new Noise-Rap-leaning side-project from Kavorkian, who described his latest Mannequin Eater EP as sonically reminiscent of Sleep Beggar or Noise Lock; "the intensity of all those artists and all the new music I've discovered over the past three years have been an influence for MANIK|NETER. For this EP, I wanted to harness that energy using a minimal approach and build out from there, as I try more things and learn new gear." Carl Kavorkian's coincidentally, runs in the same East Coast Indie Hip-Hop circles as The Witzard favorites Darko The Super, Height Keech, ialive, JE DOUBLE F, Ray Strife, Jumbled, Walter Gross, and Cody Jones. Kavorkian has self-released a whopping 21 albums, EP's, mixtapes, and assorted projects on his own Cult Member Music imprint and was featured on "Dope Skill" from DOOM's Venomous Villain (VV:2) released as Viktor Vaughn and contributed production work to Nogatco Rd. (2006) Kool Keith's first album under his Mr. Nogatco alter-ego.


Carl Kavorkian played a show just this past Saturday, May 6th (under his MANIK|NETER alias) that was quite fittingly dubbed The Punk Rap Show and billed as "Strangers with nothing in common, except each other" along with Supine, E. Grizzly—who designed the extremely sick zombified Breakfast Club show flyer pictured above, Dreadpool Parker, The Sh*t Hawks, Buddy Leezle, and Sikes & The New Violence. The Punk Rap Show: NJ/Pittsburgh/Philly Edition was initially scheduled to be held at The Fire on W. Girard Ave. then, moved to Safety Meeting on Willows Ave. briefly moved to Philly Kid Grafix (PKG) on Girard, and then, at the final hour, roughly around 6:00pm Saturday, moved back to Safety Meeting. Now, while I have yet to see Carl Kavorkian's MANIK|NETER show in a live setting, I would assume it's just as "loud, abrasive, and mental" as the material housed within his premier Mannequin Eater EP... which I would compare, if pressed, to Death Grips' Exmilitary and NO LOVE DEEP WEB, STATIC BROTHERS' OBSTETRIC TRASH EP, Occult Hip-Hop emcee Mahatma Crowley, Doc Savior & Heavy Rev, and even Ice-T's newly re-invigorated Hip-Hop-infused Heavy Metal band, Body Count. Carl Kavorkian recently described his Mannequin Eater EP as "an exploration in minimalism, beats, basslines, and raw thoughts" and deals primarily with mature themes such as "aging, taking things for granted, and getting by on a tight budget." MANIK|NETER's Mannequin Eater EP is currently available for streaming and download from Carl Kavorkian's Bandcamp page on a Name-Your-Price basis; 30 limited edition cassettes and MANIK|NETER pin sets are currently available for pre-order, as well and should be expected to ship by or around 5/22. Kavorkian eerily attests that his inaugural "Mannequin Eater [EP] is a short, but sweet introduction of what is to come."

Posted by Matt Horowitz at 8:14 AM