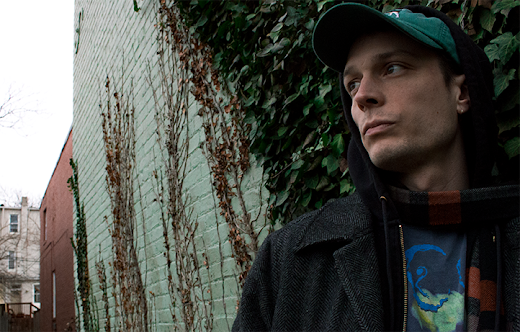 I recently heard about rapper-producer Drew Scott after fellow Baltimore beat-maker John "Jumbled" Bachman shared his latest single from then-unreleased ILL VESSEL, Hemlock Ernst, Eze Jackson & 83cutlass-featuring "Porcelain." I immediately reached out to Drew Scott, simply on the strength of "Porcelain," and we quickly began emailing back and forth. Before too long, he sent me a pre-release copy of said album, ILL VESSEL along with this fitting, extremely descriptive statement: "So, it's kind of a solo album/collaborative project I've been working on for about three years in-between the last BLACKSAGE album and Luvadocious with Al Rogers, Jr. Predominantly Baltimore artists, aside from PT Burnem (Richmond, VA,) Mike East (Rhode Island,) and Jaws That Bite (Detroit.) I did almost all of the beats, aside from contributions from Berlin-based producer Owen Ross, the Jumbled-produced track, the Mike East-produced track, and collaborating with Jaws. It's my first solo release since 2014. Mostly, I'm rapping, but there are some sing-ier tracks as well. It kind of started as a Sci-Fi concept album about a dystopian future, but overall it deals with depression and being bi-polar, some political themes, as well, and technology and its influence. "Suicidal Android" with JPEGMAFIA and Pale Spring is kind of written from an android's perspective, coming to terms with consciousness and realizing they're/I'm a tool of Capitalism; existing to serve humans and study their algorithms. "My Vessel" is kind of a misanthropic observation on mankind's obsession with wanting to leave the planet." ILL VESSEL is now available for unlimited streaming and purchase from Drew Scott's personal Bandcamp page, along with his Warmest Regards EP recorded with BLACKSAGE bandmate Josephine Olivia and Berlin-based producer Owen Ross. I recently emailed Drew two batches-worth of thought-provoking questions concerning ILL VESSEL, new material from BLACKSAGE and Luvadocious, Warmest Regards' "secret side EP," his sources of inspiration and influence, and his recent batch of remixes for Height Keech and Wildhoney. Feel free to sit back, relax, put on a copy of ILL VESSEL, and delve deep into my conversation with Drew Scott.

I. How did you come up with the idea behind ILL VESSEL, "a Sci-Fi concept album about a dystonian future [that] deals with depression and being bi-polar," as well as themes of a political nature, technology and its influence, mankind's obsession with space travel, etc?

Originally, I was just loosely making these concept songs probably because I was reading more stuff in that vein. These dystopian themes weirdly became more and more of a reality in the last three years since I started it. I let some of the features dictate what the subject matter would be, but my solo work has always been my best form of therapy; isolation is a big theme throughout as is wanting to leave the planet, whether it's in a vessel or suicidal ideation, it's kind of the same thing.

II. How did ILL VESSEL morph, over the course of its 3-year creation, from a solo Drew Scott album to the quasi-collaborative album you're now preparing to release?

Well, I knew I wasn't that interested in making a "solo record," that idea felt really boring. Especially after working on Luvadocious with Al Rogers and in Baltimore you're surrounded by these insanely talented people who are multi-disciplined. Everyone is collaborative in nature, so it just comes up in conversation like, "so, what are you working on...?"

It surprisingly, wasn't that painstaking. It's a close-knit music community here; it's just a matter of being a mix of really persistent with people and really patient with people because everyone is busting their a**es with music. Having a good elevator pitch, via email definitely helps.

IV. What was it like working with the ever-illusive Sam "Hemlock Ernst" Herring on ILL VESSEL's "Porcelain" and "Dear Cupid?" Also, do you happen to have any type of leads on his long-rumored Hip-Hop project?

Sam is a pro. He sent me back the "Porcelain" verse within days and he laid down "Dead Cupid" at my house in a couple takes. It was his idea to have a woman emcee kind of answer his verse, so naturally, my girlfriend Anna Notte was a perfect fit. I don't know what he has planned as far as Hemlock Ernst material, but I've heard lots of unreleased stuff and it's really, really dope.


V. Aside from Jumbled-produced "My Vessel," Jaws The Bite-co-produced "Interlude," and Mike East-produced "Save Your Aim," you produced the entirety of ILL VESSEL yourself, correct? Would you mind running us through your typical beat-making process for, let's say... Hemlock Ernst, Eze Jackson & 83cutlass-featuring "Porcelain?"

The process for each song is different, but I like to tinker with things for as long as I can. "Porcelain" might be the oldest beat on the whole tape, but I just chopped up "Double Dare" by Bauhaus. I wanted to make something Industrial and noisy, with a Boom-Bap vibe and initially sent it to 83cutlass. He was the first to lay his verse down and he actually helped with the drums a bit, also. Then, I laid my part down and then Sam [Hemlock] destroyed it. Eze was the final nail in the coffin and I kinda re-worked the beat around everyone.

VI. How have the Beastie Boys influenced your musical output over the years? I noticed a clever "don't you tell me to smile... if you stick around, I'll make it worth your while" interpolation from "Intergalactic" on Jumbled-produced "My Vessel" from ILL VESSEL. What's your favorite Beasties album?

My favorite album changes depending on my mood... but I'll say Hello Nasty, since I have the sardine can tattoo'ed on me. As far as influence, their production alone was always so experimental album-to-album. I remember hearing their first three records very young because of my parents and my uncles and was always captivated; sonically, they've been so satisfying and always hit me with a curve ball. I think that alone has been their biggest influence on me, to always keep the listener guessing.


VII. How do you personally think your overall sound and approach to music-making has grown and evolved since your last solo album, 2014's The Drewcifer Tape?

My approach is always the same, but I think with Drewcifer Tape, I was in a much darker place. This album [ILL VESSEL,] feels a bit more relaxed overall and I just really took my time to write and bounce off all the different personalities and features. I wasn't trying to make a strictly "Rap album" either, so there's more singing and experimenting with the vocals. My girlfriend (Pale Spring aka Anna Notte) was heavily involved in the whole process from beat-making to song-writing down to the design.

VIII. Who would you likely list as some of your greatest sources of influence and inspiration during the creation of ILL VESSEL? Aside from the work of a few of some of your Baltimore contemporaries, I can honestly say it's unlike anything I've ever heard before!

As far as inspiration, it's pretty broad and definitely not limited to music. I'd have to say stuff I,m always listening to like OutKast, Beastie Boys, NIN, and El-P. Also, a lot of the darker modern Rap albums were really exciting like Vince Staples, Earl Sweatshirt, and Future. Prince has always been a huge influence in my production, also. Much of it has been witnessing the local music scene flourish, bouncing ideas off fellow artists, that's been most inspiring. Everyone that worked on the album influenced it in their own way. I just filled in the spaces accordingly. As for the Height remix, he sent me an early link to the album and ["Amazing Spiral"] caught my attention right away, his flow was different from the rest of the album, plus the Mister feature was so sick. I wanted to make it kind of bleak and somber.`


IX. With ILL VESSEL now out into the ether of the world, what else are you currently working on or planning to start working on next? Any new material from BLACKSAGE, Luvadocious with Al Rogers, Jr. or any other as-yet-unannounced projects?

I'm always working on stuff, whether it's BLACKSAGE or just random beats. I have left-over songs from this era of material, as well that will eventually come out. Al and I definitely talk about doing another Luvadocious album, but I know he's close to finishing his solo EP, I have some production on there, as well. But recently I've been recording stuff for 83cutlass and his new album and I'm doing some production for another Pale Spring EP, as well.

X. While I've previously seen your 2015 #DrewSCottRemixes comp. on Soundcloud, I've noticed you've recently gotten back into the remix game; re-working Wildhoney's "TL Reprise" and an as-yet-unspecified track from Height Keech's MIND MOVES THE MOUNTAIN. How did these collaborations come about and how does your approach to a remix differ from your own productions?

Doing remixes is probably my favorite thing to do because it's a challenge to fit my sound into different genres. I wouldn't normally get to work with say a Post-Punk band like Wildhoney. I've been friends with members of that band for years now and that's actually the second track I've remixed by them, so it was pretty organic. My production work in Pop and Electronic music (with BLACKSAGE) has definitely opened doors to new audiences and relationships, in that regard.


XI. What can you tell me about your just-released "secret side EP" with Josephine Olivia (BLACKSAGE) and Berlin-based ILL VESSEL collaborator Owen Ross as Warmest Regards? How did your self-titled cross-continental EP come to be and can we expect a Warmest Regards full-length any time soon?

We met Owen years ago doing a Rap show with Eze Jackson when I was in this duo called Something compleX, he did this one-man Electronic/guitar thing and I was instantly inspired by his sounds. We've been in touch ever since. We've always shared music back and forth. He's like my go-to guy when I think a beat is missing something. He did some guitar on Luvadocious, as well. Warmest Regards was just a fun thing we stuck with—not sure what we have planned yet, but he recently moved to Berlin from NY and it hasn't changed our music collaboration one bit, so I wouldn't rule it out.

XII. I've luckily, been exposed to a handful of super-talented Baltimore-based artists, thanks to your peers Jumbled & Height, in recent months... but who might you be able to expose my readers and myself to that we may not have heard of yet?

Well, damn, I could really go on forever... but as far as Rap goes, [definitely] check out JPEGMAFIA, Bond St. District, Abdu Ali, and Butch Dawson, if you haven't yet. Joy Postell and Bobbi Rush, if you need some Soul. A few beat-makers I'm always vibing to are Urban Shaman and eu-IV... and this new Wae album [Glimmer] out on Friends Records I've been listening to weekly, also. That's a good start!

Posted by Matt Horowitz at 7:42 AM