DJ Cummerbund Pens Yet Another Chapter In The Ever-evolving Saga of Rhonda Garbonzo: Flo Rida, T-Pain & Motörhead-assisted "Boots (with The Fur)" 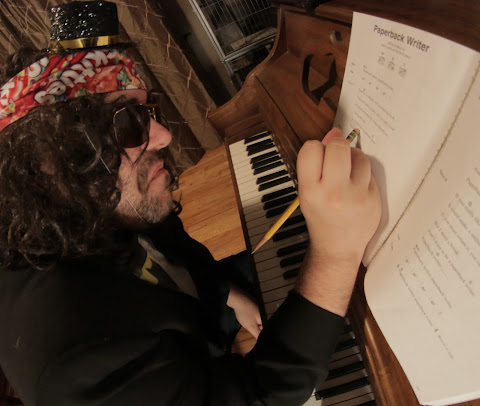 Here, ladies and germs, we have the next audio/visual chapter in the ever-evolving saga of Rhonda Garbanzo: Flo Rida, T-Pain & Motörhead-borrowing "Boots (with The Fur.)" Lest we forget, the last time we heard from our beloved strong female protagonist was within DJ Cummerbund's Foo Fighters-approved "Freaktender;" an expertly-executed mash-up artfully blending Foo Fighters' "The Pretender," Rick James' 1981 Disco-Funk smash hit "Super Freak," The Beach Boys' "Help Me, Rhonda," and Led Zeppelin, for good measure. Since "Freaktender" and prior to the infectious Urban R&B and Heavy Metal-blending concoction that is "Boots (with The Fur,)" DJ Cummerbund has unleashed Evanescence & Celine Dion-juxtaposing "Bring Me My Heart," Nickelback, Sixpence None The Richer, Ying Yang Twins, Dragonforce, and Lil Jon-featuring "FreckleFeet" (the sequel to "PantsFeet,") Blind Melon and Twisted Sister-assisted "No Take It," and Rihanna, Gorillaz, and Metallica-mashing "That Which I Desire."

While I've been admittedly dragging my feet a bit for the past 2-3 weeks since "Boots (with The Fur,)" the ever-prolific DJ Cummerbund has somehow released not one... not two... not three, but four newly-minted mash-up chapters to Rhonda Garbanzo's story: "The Sound of Smash Mouth" (Karaoke Version 노래방 버전,) "Came In Through The Window," "Imagine There's No Yoo-Hoo," and Shia LaBeouf-starring "Thick Skin," uploaded just a few mere hours ago. Did anyone follow absolutely ANY of that? Regardless, or not withstanding, I'll let DJ Cummerbund himself take it from here; below, is an emailed statement on "Boots (with The Fur,)" which I received from Mr. Cummerbund's manager and "handler" J. Gary Gildersleeve. I've been told by Gildersleeve that DJ Cummerbund is currently hard at work on an EP's-worth of original material, which he was only able to describe as, "interesting... so far!" So, do yourself a favor this weekend and peruse through the fun-loving audio/visual saga of Rhonda Garbanzo and don't forget to subscribe to DJ Cummerbund's YouTube channel. You surely won't regret it!


"Hello again, Matthew. I just released a new mash-up, which is another chapter in the long saga of Rhonda Garbanzo and serves the purpose of emphasizing her penchant for a sinful lifestyle and desire to be the center of attention. I chose Motörhead's "Ace of Spades" and Flo Rida's "Low" because they are both in Eb minor and as you know, Eb minor has 6 flats... 6x111 = 666... The Number of The Beast! Fans will also recall Beethoven's use of Eb minor to the introduction in the last movement of his "Septet Op. 20," which I heavily borrowed from for this particular work. I also included footage of the band Motörhead as LEGO's because I like LEGO's. Speaking of fans... I just have to say, after a string of unfortunate incidents, I would like to request privacy when I'm out in public with my family. The other day, I was having brunch in the village when two children... they had to be about 10-years-old... just walked right up to my table and started blathering on about how much they love my work and how I'm their hero, etc. I immediately jumped up and started screaming at them to leave me alone and they start making a scene by weeping loudly. This COMPLETELY ruined my very nice, quiet meal and I am just SICK of these things happening all of the time. PLEASE leave me alone when I am having brunch. Twaddle!"

Posted by Matt Horowitz at 9:53 AM