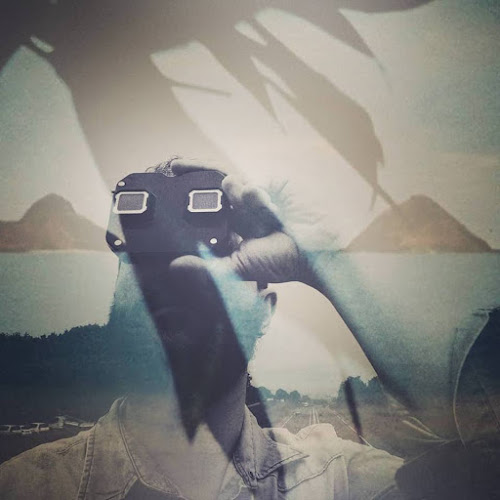 "One morning in October, 1999, it's very early in The Paris Metro. I'm bent double on a folding seat, unable to take back control. Suddenly, the storm that's been brewing in my head for weeks is to heavy to bear. I can't ignore it anymore, I can't pretend. It's the beginning of a long struggle against myself. It's the beginning of a quest not to founder completely, to tame the dangerous jungle that my brain has become. I have lost my moorings, those that connected me to a territory familiar to me: the I that I used to be, the world that I used to inhabit. I will never see it again, probably. But I can invent a new Nation," reads NATION's recent S o m e t h i n g H a p p e n e d promotional one-sheet.

NATION is the latest project from Paris-based musician and multi-instrumentalist Guillaume Destot AKA Vim le Commodore, formerly of Vim Cortez. Destot established NATION in 2016 and as their Facebook page reads, are "looking for somewhere to go from there." Last year, NATION quietly released a their Baltimore Rising EP featuring "Baltimore Rising" B/W Prince-indebted "Computer Purple," which was profiled right here on The Witzard. Now, Guillaume AKA Vim le Commodore and a rotating cast of "some friends, depending on their availability" has returned with his proper 6-track debut EP, Something Happened. Guillaume Destot was kind enough to provide a thorough track-by-track break down of NATION's Future Soul/Pop-leaning Something Happened EP exclusively for The Witzard. Something Happened is now available on ALL digital streaming services, as well as limited edition vinyl(e) through Kromatik Records/Musigamy.

"The inspiration for this track comes from various places. I'm a great fan of Ulysses by Lord Tennyson and of the idea that even though Ulysses finally got home, he's changed so much that he's no longer in a place he feels fine in. I don't necessarily, project myself in this feeling, but I find it interesting: the journey has more influence on you than where you start from, and where you’re headed. There's also, the idea that along the way, you can lose sight of who you are, now and then. I'm not sure if that's a bad or a good thing! The main riff, at least, the one I like best, which is in the chorus, was actually, created spur-of-the-moment by Nicolas Gueguen, who co-produced and arranged the tracks with me. The guitar motif is inspired from African guitar styles—I'm not at all a specialist, but there's something I love about the way Congolese guitarists, for instance, use the instrument."

"This track was inspired by the events in Baltimore in 2015, which I observed from a distance, but which affected me very much. The story is told alternately from the point of view of a policeman, who's not sure he's on the right side of history and from a more collective point-of-view, which emanates from the demonstrating crowds. The main synth riff is intended to give a sense of both hope and despair, of anger and sadness. It's not a happy song, in other words, I tried to have it translate my frustration and my sadness about Freddy Gray's death and the events that surrounded it."

"The name of this tracks is odd: I tend to give specific names to demos, when I'm working on them and for some reason, this one stuck, even though, its not thematically related to the lyrics. But to me, there's something a little "gangsta" in the groove, at least [because] it's slow and vaguely menacing. But as usual, the guitar gives it a more plaintive, melancholy twist. Some people don't get that the guitar is intentionally late rhythmically. I intended it to sound like a hesitant voice. As far as the lyrics are concerned, they are partly autobiographical, as they speak of a friendship I lost many years ago and which still hurts to this day. The chorus tries to express that songs can numb the pain, even if they sometimes tell lies. I certainly use songs to tell myself stories that are not always true, but which help keep my mind off things I don't want to think about."

"This song opens with a sample from a NASA audio document, in which the speaker describes the last flight of the space shuttle. It's very Sci-Fi. As far as inspiration: it talks about a guy, who's in love with a woman, who might be a cyborg. Sound familiar? Of course, it was inspired [by] Blade Runner, which is my favourite film of all time. But there's also, some Joseph Conrad thrown in and some Captain Harlock... it's a window into my own epic fantasies, I guess. There's often "static" in my soul, a kind of background noise that I try to turn into meaningful music. My good friend Swanny [Elzingre], who plays drums with me on stage, sings the background vocals on this and plays the drums, which we sampled [and] chopped up like something off an old record. This, along with "Baltimore Rising," is the only track that has live drums on it."

"I really meant this one to be atmospheric and say something about the ambiguous feelings that make up what we call "love." There’s sometimes guilt, secrecy in equal measure with openness and plenitude. At least, that's the way I experience it. I've never tried to play this song unplugged, but I'd like to try it; the texture of the synth is so essential that I wonder, if the song can even exist played on an acoustic guitar or piano. I like to do this sort of thing, actually, and more often than not, I find myself completely re-inventing the song or, at least, giving it a new identity. We had a lot of different tools in the studio: old analog synths, as well as state-of-the-art plug-ins, but sometimes, trying to re-produce on-stage exactly what you did in the studio is not very interesting. So, we'll see what this one becomes, once I've chosen how to play it live. Musicians sometimes, find the lead motif a little odd because it doesn't fall on an obvious division. I quite like this kind of shenanigans!"

"This one is about this feeling I often have that I'm not in the right place or, at least, that the place I’m in is not right for me. And this tends to happen to me in crowded places or at parties, etc. I guess, every now and then, we all feel like we're a stranger in our own lives. I certainly feel this very, very often. Which is one of the reasons why I "build myself a bubble," which I carry with me everywhere, but which is easily burst because there are so many eyes and faces to face.

I quite like the guitar sound at the beginning (take this [as] a "note-to-self:" I should use this sound more!) It's a Big Muff fuzz with some added FX's. It's very distinctive. As far as the vocal sample is concerned, it's actually, my own voice; it's from a previous version of this song and I recycled this snippet, which I find is very important to the general feel of the track now. I think, Nicolas [Gueguen] and I played quite a bit with an old Echoplex that he has; it’s a vintage echo box that makes some other-worldly sounds. The third verse, which has a different, almost Reggae-like feeling, is partly inspired [by] Major Lazer's sounds, although, it might not seem obvious. It's meant to sound a little more sardonic or, at least, a little angrier than the rest." 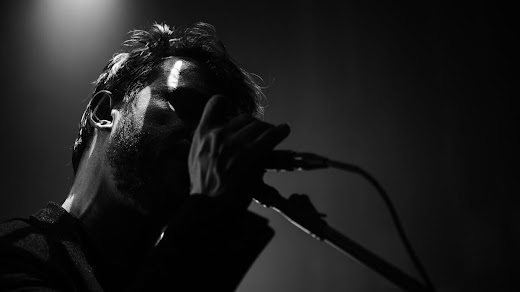 Posted by Matt Horowitz at 9:47 AM