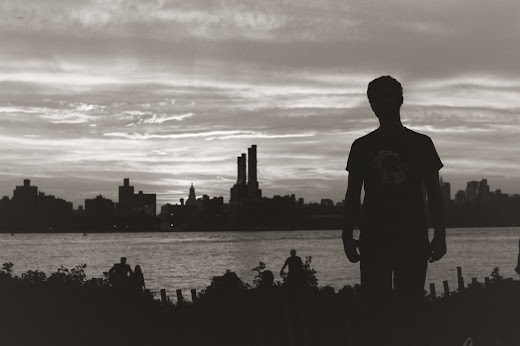 Owen Ross is a singer, song-writer, multi-instrumentalist, and producer originally hailing from Brooklyn, New York, who now resides in Berlin, Germany. Ross spent years on the road as a touring guitarist and has played and written many styles of music with an emphasis on Soul, R&B, Gospel, and Hip-Hop. He has worked with Baltimore emcee and producer Drew Scott on a number of projects including Luvaducious with Al Rogers, Jr. ILL VESSEL, Giddeon Gallows' CRITTER, and as Warmest Regards with BLACKSAGE's Josephine Olivia. Prior to releasing music under his own name, Owen Ross recorded and released three EP's as goste between 2013-14. Since retiring the "goste" name last year, Owen Ross has written, performed, produced, and released three EP's: 2017's Fluorescent I, it's 2018 follow-up Fluorescent II, and his latest EP, Greyscale, released on Berlin-based imprint Finest Ego.

Owen Ross further explained: "I started seeing myself as a producer around 2010, after many years spent solely as a guitarist/composer. The development wasn't really linear, so selecting albums and artists that were a part of it is a bit tricky... I always feel like I'm leaving someone out. Suffice it to say. I was influenced by a lot of things. Other major catalysts included my band of three years breaking up, living above the (now-defunct) Flying Dutchman Studios in Boston, and buying an MPC-2000 and hundreds of floppy discs. But anyway... to the music." Owen Ross' first fully instrumental EP, Greyscale is now available to stream or purchase on Finest Ego, as well as most digital retailers.

"If I had to name the artist that had the biggest impact on me as a producer, it would be Prefuse, hands down. My old roommate was hip to a lot of great Electronic music, at a time when I was listening largely to Jazz, guitar-centric music, and Hip-Hop. I remember hearing "Perverted Undertone" coming from his room and just being blown away. I immediately asked him what it was and got my hands on some albums. It was the first Electronic music that I'd heard that felt really emotional... it had a vulnerability to it... it was brash and boisterous, but fragile... full of contradictions. It really felt like someone made it with their hands... like every detail had been poured over. Honestly, this list could have easily just been five P73 albums."

"I learned about Dimlite soon after Prefuse. Prismic Tops was the first record of his I heard and since, I've been an avid fan of all his work, whether it's Dimm Grimm, Dym Quell Holo, Misel Quitno, etc. It was one of those records that I knew I liked right away, but it took me a while to digest it and fully understand it. His harmonic choices never cease to amaze me... needless to say, I'd never heard such rich, heavy-harmony in Electronic music before. There was also, a recklessness to it... the opening melody of "Sun-Sized Twinkles" had this sort of child-like humor to it. I always felt like there was the perfect amount of "f**k you" buried in layers of complex beauty on his records. I've shared various incarnations of Dimitri Grimm's music to a lot of producer friends of mine, over the years... it freaks everyone out."

"The first Flying Lotus song I heard was "Tea Leaf Dancers." I was heavy into "guitar music," at that point, but I was playing a lot of Hip-Hop/Neo-Soul and Gospel gigs. The trumpet player in my old band showed me that track and I was immediately hooked. The groove was so heavy, but there was so much restraint... so much nuance in the music. I got my hands on Los Angeles and wore it out. I loved that it was so hard to tell what was a sample and what was an "real" instrument... that's something that I've tried to incorporate into my music. His drum sounds really stood out, too... the way foreign sounds blended so seamlessly with drum machines... it still resonates really strongly with me."

"I got into Sparklehorse backwards; a bass player friend of mine showed me the record he made with Danger Mouse [Dark Night of The Soul], as we were driving back from a gig. I liked it, but I really connected with the four Sparklehorse records that came before it. I got Vivadixiesubmarinetransmissionplot (1995) and from the first notes of "Homecoming Queen," I was hooked. His voice was so honest and the lyrics were somehow ethereal and immediate at the same time. I think all four of those records are classics. He really had his own production style, too. I'm often drawn to paradoxical music. Sparklehorse records were always simultaneously retro and modern... aggressive and gentle... experimental and classic. There were always all kinds of tape effects and weird pannings in places where you wouldn't expect them... super-distorted drums... Yak Baks... some of my favorite music ever."

"I became a Madlib fan because of my love of MF DOOM. I wasn't heavily producer-focused, at that point, but I loved DOOM as a rapper and I was consuming as much of his music as I could. I'd already worn out several of his records, before I got to MADVILLAINY and it was immediately clear that this one was different. The beats were so raw... I'd never heard drums like that... I was also, listening to a lot of Jazz, at the time, so hearing Madlib flip so many classic Jazz tracks was a treat. Once I heard him flip [Miles Davis-penned] "Nardis" on "Raid," it was over. To this day, I listen to tons of Madlib. His catalog is so big and so diverse that there's always something new to discover. I also, love that he never changed at all to fit mainstream markets... he never made any shiny tracks... even when that was the norm in Hip-Hop. I think, he will hold a special place in the history of music."

Posted by Matt Horowitz at 9:21 AM