Cold Feet is a Punk/Hardcore band hailing from Baltimore, Maryland consisting of frontman Matt Casey, guitarist Evan Splain, bassist Tyler Holcroft, and drummer William "Billy Quitter" Chapman. Its members have previously/actively played in Quitter, Thematix, and Smoking Gun. Cold Feet, seemingly, formed around 2016 and rapidly self-released Demo 2016, TOUR TAPE 2017, and 2018's COLD FEET... EP. Now, Cold Feet have joined forces with Richmond, Virginia-based imprint Feel It Records to release their proper full-length album/EP entitled PUNK ENTITY. Earlier this week, Feel It Records quietly released the first single, "Good Book," from PUNK ENTITY; honestly, scrap that... this is probably the furthest thing you'll find from "quiet" on The Internet today! Just based off "Good Book," Cold Feet appear to harness a frantic, chaotic, feverish nature comparable to Henry Rollins-era Black Flag, The Misfits, Fugazi, and Minor Threat. It's an extremely old school Punk/Hardcore style often imitated, but very rarely, ever this well. "Good Book" only lasts for an all-too-short 1:16, but, I'm guessing, this will be a good sign of what's to come on Cold Feet's next full-form release. Feel It Records are currently taking pre-orders for PUNK ENTITY; a first pressing of 400 copies will be packaged with a double-sided two-color risograph insert, download code, and a hype sticker all packaged within a reverse board 20pt. jacket. Those 400 copies of PUNK ENTITY will be split up into 80 copies on orange/black swirl vinyl and 320 standard black vinyl. Cold Feet's PUNK ENTITY is out on Friday, April 3, 2020, via Feel It Records.


"John Waters once said, "the only thing I wanna be is a negative role model for a whole new generation of bored youth." Well, perhaps Baltimore's Cold Feet were the generation that picked up on those sage words and have crafted their own trashy, Hardcore Punk anthems on Punk Entity. Following a promising debut 7" EP and several cassette releases, we find Cold Feet at the height of their game with eight completely scorching tracks. Caught somewhere in the cross-hairs of the early 80's USHC craze, like the odd New Englander cousin who caught as much X-Claim! as Mutha Records bands, Cold Feet harness the power of Get It Away-era SSD, steal the reckless abandon of the first couple N.O.T.A. 7"s, and indulge the Bohemian sense of humor that Adrenalin O.D. rocked. These guys are complete underdogs, the secretly smart idiots that allow their guitar player to be Jim Lahey for a Halloween gig and still completely blow the place apart. Cold Feet are here to show ya that they're one of the most true-to-form Hardcore bands of [contemporary] HC Punk and hammer the point home with Punk Entity." 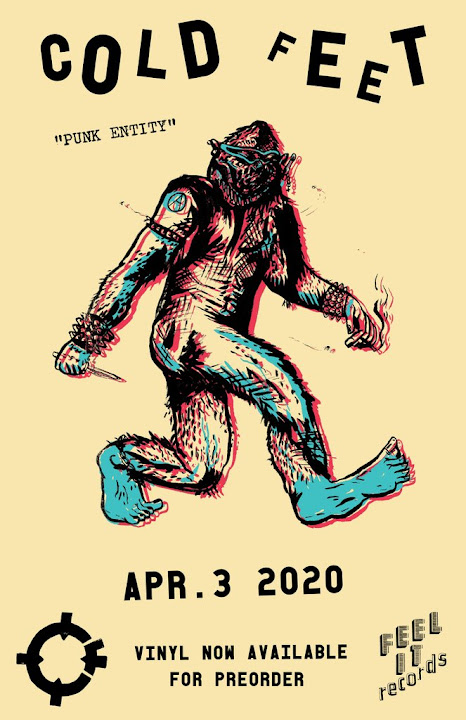