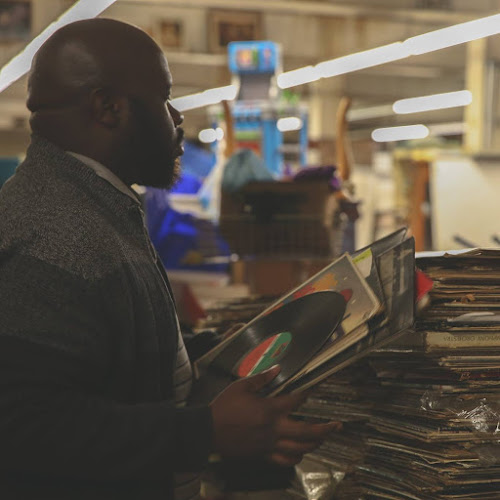 John "Liberator" Morrison is a self-proclaimed "Writer/DJ/Sample-flipper" hailing from Philly. Morrison is the host of Serious Rap Sh!t & Culture Cypher Radio and lists NPR Music, okayplayer, The Wire Magazine, and Bandcamp amongst his writing credits. John Morrison, additionally, functions as a Hip-Hop emcee and producer with remix credits on Lushlife's MY IDOLS ARE DEAD + MY ENEMIES ARE IN POWER and Career Crooks' Thieving As Long As I'm Breathing. Morrison's debut full-length project, Southwest Psychedelphia was released on Deadverse Recordings in 2016 and there's currently a slew of remixes, flips, and non-album tracks uploaded to his Bandcamp page. However, in recent years, John Morrison has been on a bit of a hiatus/medical leave... as Morrison himself puts it, "on March 3, 2018, I was hospitalized with Flu-like symptoms and a searing headache. After nearly two weeks of intense hallucinations, pain, and non-stop testing, I was diagnosed with Viral Encephalitis; a potentially deadly illness that was attacking my brain and spine."


Said injury to John Morrison's brain threw his mind into complete chaos, which caused him to often misremember things, with memories and events playing out in a jumbled, non-linear fashion. Following his ordeal, John Morrison was forced to temporarily move back into the house he grew up in with his mother and partner, Melissa "Lissa" Simpson, helping him get through an undoubtedly lengthy recovery. During this period of time, Morrison occupied himself by simply hanging out, re-connecting with family, friends, and neighbors, as well as rummaging through his mom's basement unearthing dusty old records, books, beat tapes, and magazines from years past. Memorabilia, John Morrison's latest release, dubbed a "remixtape," was concocted during this time from his wheelchair. It features a wide of array of remixes, flips, blends, etc. sampling the likes of Redman, J-Live, Lords of The Underground, Biggie, Pete Rock & C.L. Smooth, Brandy, Busta Rhymes, Radiohead, The Roots, Thurston Moore, Jadakiss, CAN, Beastie Boys, A$AP Ferg, Nas, and De La Soul.


Memorabilia was entirely produced by John Morrison himself with mixing and post-production handled by fellow Philly beat-maker Rolled Gold. To accompany Memorabilia, Morrison enlisted New Orleans' very own Wino Willy to create a 16-minute short film entitled Memorabilia (A Film by Wino Willy.) It was painstakingly sourced from hundreds of hours of YouTube clips, commercials, are music videos, interviews, and more hand-selected by John Morrison and turned over to Willy for editing. Morrison says he's been describing Memorabilia's companion short film as "a sample film, completed composed out of previously existing visual content. Structurally, it's kinda like watching YO! MTV RAPS on acid." John graciously supplied us with a thorough breakdown of records that influenced him during the making-of Memorabilia, which you can read through below. John Morrison's Memorabilia is now available to purchase, stream, or download in both digital and physical (cassette) formats directly from his Bandcamp page.

"This might be the core influence that runs through Memorabilia. Madlib is well-known and it seems like his notoriety is still growing, but he is severely underrated as a remixer. All of his beats fit together naturally with the acapellas and the end result sounds like an original song, THAT'S what I was going for. The Roots' "Don't See Us," Common & 45 King's "Car Horn," his version of [Gang Starr's] "Just to Get A Rep," the whole project is flawless."

"Japanese producer Keigo Oyamada (AKA Cornelius) is one of my all-time favorite musicians. His work is rooted in beat-making and Hip-Hop production, but he adds all of these layers of Psychedelic sound. Fantasma is his opus, but he's, also, a great remixer, as evidenced by the CM: Cornelius Remixes tape, where his flipping tracks by Money Mark, Coldcut, U.N.K.L.E. etc. It's funny, when I was active as an emcee, I used to open my live sets by rapping over Cornelius' song "Mic Check.'"

"I'm always down for a weird, bugged-out Psychedelic Rock record. I grabbed this at Human Head in Brooklyn and it's wild; trippy vocal effects, backward tape loops, lots of strange lyrics, and fuzz guitar. I've been digging up stuff like this to drop onto tape in-between beats for interludes since I was a teenager."

"This record just turned 25-years-old a few months ago and its prominence has only grown. Everything about this record is just fly and dripping with flavor. C.L.'s really shining throughout the album and Pete Rock's production is top-notch. The sampling here is really diverse and tasteful. They're using everything from Donald Byrd to Hugo Montenegro, Milt Jackson, etc. and it all melds together beautifully. It's sad that they broke up right after this album came out."

"This album has been really important to me since I was a kid. It's really an unheralded gem of 90's West Coast Hip-Hop. [How] King Tech, The Baka Boyz, and Joe Quixx handle the production a beat like "HOW DARE YOU," (my "Woo-Hah" flip) is something that I would've given to The B.U.M.S back in the day, if I had a chance."

"GONG grew out of the British Psych-Prog band Soft Machine, as well as the famed Canterbury Prog-Rock scene in the 70's. This album is right up my alley; trippy, full of skits, weird, and colorful. I promise the next time I spin at a party where there are breakers, I'm going to drop the song "Love Is How You Make It." They've got another record that I found while making Memorabilia and it has that flute loop that Nas used on the song "Ooochie Wally.'"

"I've been obsessed with Massive Attack a lot more lately, but they've been an influence since I was young. They really took Hip-Hop, Dub, Post-punk, and Soul, mixed it together, and made it into a coherent whole. I could've picked Blue Lines or Mezzanine. but I liked that they let Mad Professor flip the entire project and make it even spacier and dubbed-out. I'm [reading] Melissa Chemam's book on Massive Attack [Massive Attack: Out of The Comfort Zone] and, apparently, Radiohead asked MA to do the same thing and remix OK Computer, but scheduling prevented it."

"A big part of the process behind making Memorabilia involved re-visiting or discovering old Rap records that came out when I was young. I fully remember this group and the single that they dropped, "Legion Groove," but I've only recently dug into the album and it's great. Some of the production puts me in the mind of Runaway Slave-era Showbiz & A.G. or The Beatnuts and the album's overall vibe puts me in the mind of hanging in my neighborhood, jeeps riding by, and blasting music in the summer of '94."

"I absolutely love Jazz records like this. Rich, chill, optimistic, and spiritual sounding. Hawes made a bunch of great records, but this is the one for me. I've been on a heavy Jazz-Funk kick for years now and this album is in that style. Lots of electric piano and beautiful playing."

"I feel like I'm always re-visiting/living with this record. I was a HUGE fan of their first album, Bizarre Ride [II] The Pharcyde, so when they followed it up with this one, I was excited. Initially, I was shocked that J-Swift hadn't returned on production, but that they had brought in "some kid" named Jay Dee (AKA J Dilla.) Upon first listen, I peeped that Jay Dee had produced all of my favorite cuts on the album: "Drop," "Runnin,'" "Splattitorium," etc.

The entire album had this smokey, muted sound, and the rhythm was like Pete Rock & Erick Sermon's bounce taken to another extreme. Everybody (rightfully) makes a fuss over Dilla's rhythmic template, but, for me, it's his tonal framework that lives on with me. The way his kicks were EQ'ed, the way he low-pass filtered certain samples, the actual timbre of his music is really important for me. "12 Funeral Books" and "Funky Doctor" [from Memorabilia] would've been [Labcabincalifornia] beats, if I had been living in LA in the mid-90's."

Posted by Matt Horowitz at 9:27 AM