Guts of The Ice - An Exploration of "Puck" Rock/Hockey-core #5: RAMOMS' Ginger Ramom On "Gritty Is A Punk" (The Witzard Interview) 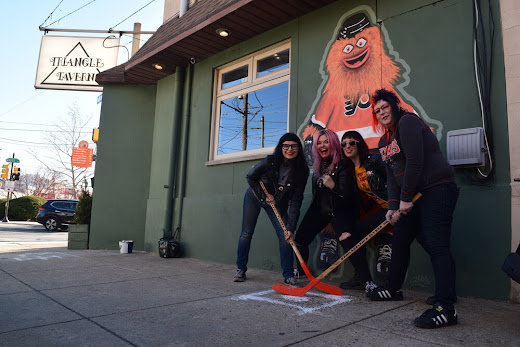 For this fifth installment of Guts of The Ice, we spoke with THE RAMOMS & The Droogettes drummer Ginger "Ramom" Knight. THE RAMOMS are an all-female, ALL-MOM, parody/tribute band to The Ramones hailing from Philly. THE RAMOMS' current line-up consists of drummer Ginger Ramom, vocalist Jodi Ramom, guitarist Sharon Ramom, and bassist Molly Ramom. THE RAMOMS first popped onto our radar here at The Witzard when we received a mysterious flexi-disc 7-inch in the mail from Christian Wagner at Pirates Press Records a year or so ago. Said flexi contained one song, "Gritty Is A Punk" a RAMOMS-style parody of The Ramones' "Judy Is A Punk" from 1976's Ramones. "Gritty Is A Punk" would later re-appear on RAMOMS' Pirates Press 7-inch EP, Problem Child, which would, also, feature "Boogie Not Snot" with Mike Gallo (Agnostic Front) and a cover of "Rockaway Beach." In addition to Problem Child and the "Gritty Is A Punk" flexi-disc, Pirates Press Records have issued THE RAMOMS' Teacher's Pet EP, as well as a Merryxmas split with Dad Brains. With the exception of Merryxmas, all of THE RAMOMS' material to date was recorded/mixed by Mike "The Boss" Bardzik (The Boils) at Noisy Little Critter... but more on that later! Scroll Down for a little self-quarantine reading material by way of our comprehensive interview with Ginger Ramom and if you've been living under a rock for the past year, you can hear "Gritty Is A Punk" below the break.

Ginger Ramom: I got into hockey by dating a hockey fanatic. He played hockey and watched it. I think, The Stanley Cup Finals were going on and The Philadelphia Flyers were in The Finals and we would, basically, go out to a bar every game to watch them because I did not have cable on my TV. So, it was, sort of, forced on me, if we wanted to hang out and there was a hockey match on, I had to watch. I, then, went out and bought us tickets to a match and after all of that, I was, sort of, hooked. I have always been soccer fan before and still... and the rules seemed similar and I like low-scoring games. I have been in the Punk Rock scene most of my life. I think, around elementary school, I was a huge Metal fan and when I went to [junior] high school, there was a local all-ages club in St. Louis, where I lived, called Bastilles that had all types of shows and once I heard a couple Punk bands play, I knew I had found my people. I met most of the people from the first Punk band I started at that club.

Ramom: RAMOMS is a parody band and around when we were planning to go into the recording studio, Gritty, The Flyers' mascot, had just been revealed and Sharon Ramom and myself wanted to write a song about him because everyone was embracing his awesomeness.

Ramom: I, seriously, only know of a couple bands that fit into the genre. Living in Philly, of course, a lot of people that go to The Flyers' games probably still have no clue that a local Punk band, The Boils, wrote the song "The Orange & The Black," which is frequently played when The Flyers score a goal. The years I was a watching, they, also, [used] to play "Bro Hymn" from Pennywise. The only other band I knew before being asked to do this interview was SLAPSHOT.


04. Aside from your own band's music, what other hockey-themed groups, releases, singles, etc. would you recommend, as well?

Ramom: Well, as I mentioned before, The Boils are a must! I, personally, am not out there looking for hockey-themed music... just good music! But to, sort of, stay "on-topic," while going off into a different court; there are a couple bands I know in Philadelphia that have [done] some soccer-themed songs for The Union. The Preps sing a song about The Blue & Gold, which are The Philadelphia Union colors and there is a band called Dive In The Box that most of the songs are about soccer, including the name. I am sure now that I live in Philadelphia that I really just like songs about our local teams! If you have ever been here, you will know you can not reside in the city without being a fan of ALL the local teams.

05. If still active, what are the future plans for your band? If currently inactive, do you have any immediate plans for any special re-issues or a proper reunion/comeback?

Ramom: RAMOMS have a ton of things coming up... some, I can talk about and some, I cannot. I know we plan to have one more 7-inch released, hopefully, in the near future... and soon after, our full-length album will be released. We are working on some new parody songs, some new photographs with our new bass player, and hoping to tour this summer! So, keep your eyes peeled for us in a town near you!


06. Aside from The Ramones' own "Judy Is A Punk," what else influenced and inspired you to create, record, and release your "Gritty Is A Punk" 7-inch flexi-disc/digital single?

Ramom: Sharon Ramom & I wrote the song lyrics to "Gritty Is A Punk" over the phone. Gritty had just been announced and everyone in Philadelphia was embracing him. We wanted to write a song about him! The lyrics were refined when we got to the studio because, at first, we were trying to include other mascots from Philly in, but decided it was best to keep it hockey-themed. And added the Crosby lines, since The Penguins are a big rival and from the same state. Pirates Press suggested that we do the flexi of the song, since Philadelphia was not the only city to seem to embrace Gritty; we are hoping it reaches world-wide domination and are hoping, someday, The Philadelphia Flyers might choose to use it at the games!

07. I just noticed Mike "The Boss" Bardzik (The Boils) at Noisy Little Critter recorded/mixed RAMOMS' Problem Child & Teacher's Pet EP's. Did he happen to have any particular advice on recording Philly sports anthems?

Ramom: Mike, actually, helped us turn "Gritty Is A Punk" into a strictly hockey song. We were, at first, trying to make it a Philly sports song and were going to include the other sports and mascots. I am pretty sure Mike suggested that we use the Crosby angle because he said, "even if you are not a Philadelphia Flyers fan, that as long as you are not a Pittsburgh fan, you will dislike Crosby."

Most of our songs start off as an idea. We learn the songs as a direct cover and when we plan to record, we try to come up with ideas that would work as a parody and sit and try different lyrics and ideas for each song. So, about 50% of our lyrics of the parodies were written while we were in the studio and we all can have input. 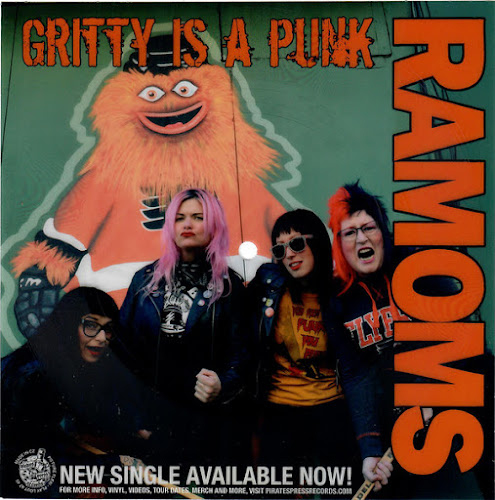 Posted by Matt Horowitz at 8:48 AM