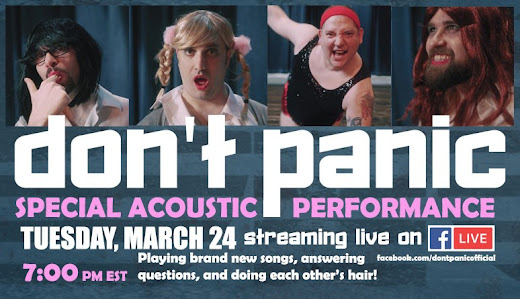 Don't Panic are a Rock "N" Roll/Power Pop band hailing from Northeast, Pennsylvania and founded in 2009. Don't Panic's current line-up consists of guitarist/frontman Ted "Panic" Felicetti, bassist Keith Slader, drummer Anthony Paesano, and guitarist AJ Larsen. I believe, I saw Don't Panic at one of their first shows at Hangar 84 right here in Vineland, NJ around 2009-10 on a tour behind their debut EP, My Fairweather Friend. It appears as though Don't Panic were active for a little while longer, released a follow-up crowd-funded demo EP called The Fix, a 2-track EP entitled Why The Fifties Were Better, went through some line-up changes, and broke up... but have no fear, Don't Panic have since re-formed and are back in full-force!!! From what we can gather, it sounds like Don't Panic will be self-releasing a series of singles, which will, eventually, be re-released as a more full-length project later this year. Don't Panic list Foo Fighters, Face to Face, Lit, Bayside, White Reaper, The Menzingers, RIVAL SCHOOLS, Electric Light Orchestra, Tom Petty, and The Beatles amongst their influences on Facebook. Frontman Ted "Panic" Felicetti is, also, a booking agent for The Queers, Screeching Weasel, The Ataris, and Richie "Ramone" Reinhardt (The Ramones) under his company umbrella, New Gold Agency.


Last month, Don't Panic premiered a lyric video for their first new single since re-forming, "No Time for Second Chances," at NEPA Scene. Felicetti told NEPA Scene the video was created using Fiverr with the help from an Asian artist, who writes out lyrics using Sharpies. "I think, essentially, [this song is] a good representation of what we have going on. I wrote this one trying to get the vibe, if you mixed Millencolin with Thin Lizzy, what that would it sound like? But, yeah, more or less, we have some slower songs and some heavier ones, but nothing strays too much from that Rock "N" Roll/Power Pop sound we’ve been trying to cultivate," Ted Felicetti explained to NEPA Scene. Now, just about a month later, Don't Panic have returned once more with their second new single, "Fall of '99," accompanied by a proper music video. As its title suggests, within "Fall of '99," Don't Panic seemingly reminisce about some of their favorite moments from 1999; Britney Spears' "...Baby One More Time" music video, Limp Bizkit, Magic Mike, Friday The 13th, and all sorts of hi-jinx during Talent Show Auditions. Amidst the global COVID-19 Pandemic, Don't Panic have announced a special acoustic performance to be held tonight, March 24, 2020, at 7:00pm EST streaming on FacebookLive. Don't Panic will be "playing brand new songs, as well as some old ones, taking requests, and answering any questions." Don't Panic's "Fall of '99" & "No Time for Second Chances" are both now available on digital streaming platforms.