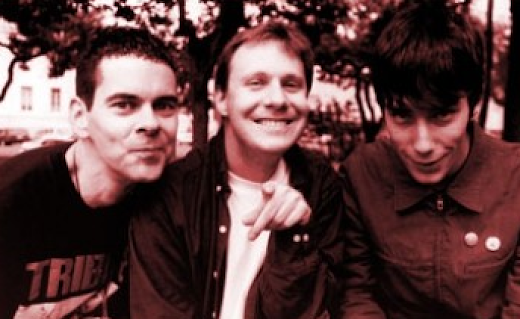 For this week's installment of Guts of The Ice, we spoke with Pansy Division co-founder and guitarist Jon Ginoli. Pansy Division has been active since 1991 and are often recognized as one of the pioneers of Queercore, as well as being the first openly gay Rock band featuring predominantly gay musicians. Pansy Division's current line-up consist of vocalist/guitarist Jon Ginoli, bassist/vocalist Chris Freeman, lead guitarist/vocalist Joel Reader (ex-The Mr. T Experience,) and drummer Luis Illades. From 1993-98, Pansy Division released six consecutive albums on world-renown Punk/Alt. Rock imprint Lookout! Records. Their seventh and most recent full-length, Quite Contrary, was released on former Dead Kennedys frontman Jello Biafra's label, Alternative Tentacles, in 2016. Over the course of the past 29 years, Pansy Division have shared the stage with the likes of blink-182, Built to Spill, The Donnas, Foo Fighters, Green Day, Jawbreaker, Jimmy Eat World, The Mr. T Experience, Pennywise, Rancid, Weeen, and countless others. According to @pansydivisionofficial, they "opened 38 shows for [Green Day] in 1994-95, going from 400-seat clubs at the start to arenas holding more than 10,000 people by the end." Within our interview, Jon Ginoli and I primarily spoke about "Hockey Hair," which first appeared on their 1997 7-inch, MANADA, and was later, hand-selected by Nomeansno/The Hanson Brothers' own John Wright for Sudden Death Records infamous Hockey Punk comp. Johnny Hanson Presents... Puck Rock, Vol. 2. This year, Pansy Division are inching towards playing their 1,000th show!

01. How did you first get into both hockey and Punk/Hardcore music?

Jon Ginoli: Well, I can't say any of us are really into hockey. But we spent a fair amount of time touring in Canada in the 90's, where we encountered many fans who were, also, into hockey, who spoke of their love for the game. That got us thinking about it.

Ginoli: Being in Canada gave us the idea. Being friends with the band Chixdiggit! helped; see their song "I Feel Like Gerry Cheevers (Stitch Marks On My Heart)" from their great debut album [Chixdiggit!] (the one that was on Sub Pop.)

Ginoli: Our one hockey-themed song is "Hockey Hair." It was a single first, then, on our album, More Lovin' from Our Oven from '97. It's on a singles comp. we put out last year called Pansy Division: Singles & Such. That song is more Indie-sounding than Punk (we straddle both sides of that line.) But it did get us on the compilation, Johnny Hanson Presents... Puck Rock, Vol. 2 in 1997 or '98.

04. How did "Hockey Hair" end up being featured on Johnny Hanson Presents... Puck Rock, Vol. 2, as curated by The Hanson Brothers/Nomeansno's own John "Johnny Hanson" Wright?

Ginoli: Our booking agent at the time, also, booked Nomeansno. So, I'm sure they were aware of us. But I don't exactly recall the details about it. In the booklet for the CD, Johnny Hanson evaluated each band's hockey potential. For our "Strengths," he described us as "team players (who) can play all positions, good in the locker room, willing to take the man." He said our "Weaknesses" were "chasing players instead of the puck." Very astute assessments, then and now.


05. Aside from your own band's music, what other hockey-themed groups, releases, singles, etc. would you recommend, as well?

Ginoli: Chixdiggit! Hanson Brothers. Here's a poster from a show we played with The Hanson Brothers in San Diego in 2003, intentionally created to sow confusion (it sure did!)

06. If still active, what are the future plans for your band? If currently inactive, do you have any immediate plans for any special re-issues or a proper reunion/comeback? 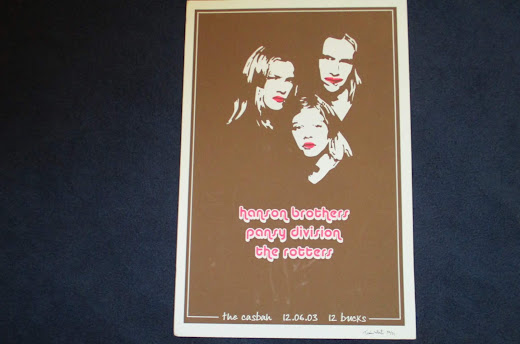