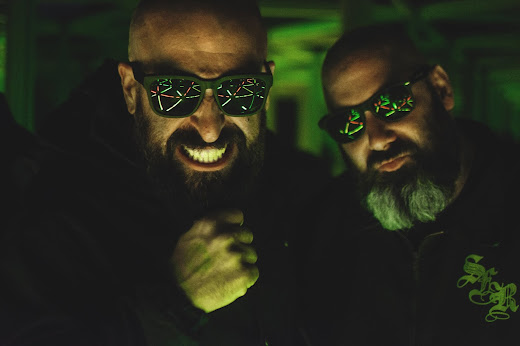 Exactly one year ago today (well, actually, this weekend,) Sage Francis & B. Dolan released their proper full-length debut together as EPIC BEARD MEN entitled This Was Supposed to Be Fun. EPIC BEARD MEN, or just EBM, put together what many, including us, considered one of the strongest and most fun albums of 2019; for the festivities, B. Dolan & Sage Francis brought along a few friends, including Slug from Atmosphere, Blue Raspberry (Wu-Tang Clan,) Vockah Redu, Eligh, and Yugen Blakrok. We were fortunate enough to speak with both Sage Francis & B. Dolan around te time of This Was Supposed to Be Fun's wide release for an exclusive interview here at The Witzard. Today, in honor of said one-year anniversary, Sage Francis' label imprint Strange Famous Records released a special Name-Your-Price remix of EPIC BEARD MEN's "Man Overboard" to help commemorate the occasion. Not exactly a blink-182 remix, as some of you may have expected, "Man Overboard" is, in fact, mildly Rock-infused, as remixed here by Jason "JNokes" Nokes.


"We tried to submit this for the #JudgementNight #soundtrack, but it turns out, we were a couple of decades late... and its cruise ship chaos narrative seems particularly fitting at the moment," Strange Famous Records (@strangefamousrecords) posted on their Instagram page Friday afternoon. Unfortunately, amidst the Coronavirus/COVID-19 Pandemic, both B. Dolan & Sage Francis have had to cancel their respective tours for 2020, however, it appears as though EBM will be far from inactive this year. As a direct result, B. Dolan has effectively pivoted to twice weekly livestreams at his Discord Server/Patreon pages. Dolan urges eager fans still wishing to support, go directly to his Patreon crowd-funding page and promises more new music soon. EPIC BEARD MEN's "Man Overboard" (JNokes Remix) is out now on Strange Famous Records. This Was Supposed to Be Fun is now available on streaming services, as well. Listen to the original version of "Man Overboard" down below the break.


"To celebrate the one year anniversary of EPIC BEARD MEN's This Was Supposed to Be Fun album, we're invoking the spirit of the Judgment Night Soundtrack with a Rock-infused remix of "Man Overboard" by JNokes (artwork by Charbel Abuxapqui.) There's been lots of judgment going around lately, so the theme of cruise ships being floating petri dishes seems apropos. Not only have Sage Francis & B. Dolan had to cancel their respective tours for 2020, but Karaoke Night has, also, been cancelled for tonight, folks. In place of all these cancellations, we'll do our best to keep providing you content and entertainment of various sorts, via the [Strange Famous Records] channels, so stay tuned, stay safe, and stay sane out there."