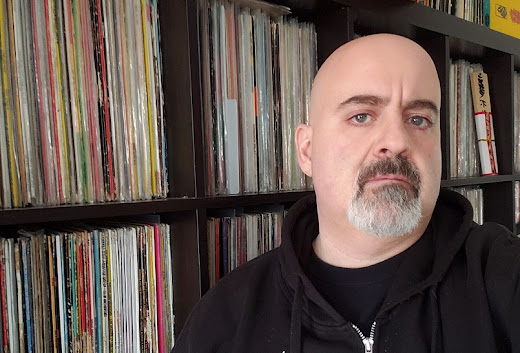 For those of you who have been closely following our ongoing Guts of The Ice series may have already seen our interview with Two Man Advantage guitarist/co-founder Jeff "Captain" Kaplan. While putting together our feature with Kaplan, we, also, had a chance to connect with a few other members of Two Man: Jeff "Snapshot" Marsala," Myk "Metal Myk" Rudnick, and Spag, who provided us with plenty of archival photos, flyers, etc. for our feature with Captain. I've since been messaging back-and-forth with Spag—otherwise know as Drunk Bastard, Swag The Drunk Bastard, DJ SPAG 69, and, formerly, Bud Tkachuk—via Instagram Messenger, where he's known as @spag69. Taking direct inspiration from Carlos Ramirez's 2017 NO ECHO feature entitled Record Collector: Spag (Two Man Advantage,) Spag & I decided to cook up our own record-centric feature for Guts of The Ice. Amidst the recent Cornavirus/COVID-19 Pandenic, Spag, stuck at home, like the rest of us, agreed to hand-select about 5-10 integral Hockey Punk records and CD's from his own personal collection; those including Stompin' Tom Connors, The Hanson Brothers, D.O.A. The Riverdales, Hockey Teeth, THE ZAMBONIS, Two Man Advantage, Slap Shot (the movie,) Maxine Nightingale, The McRackins, SLAPSHOT (the band,) ...The chemistry was just right! The exciting story of the N.Y. Islanders, and CHIXDIGGIT! To accompany our feature, Spag sent us photographs of his own records, CD's, etc. cherry-picked from his vinyl collection. Plus, we curated a playlist, appropriately titled Spag's HOVID-69 (Hockeyvirus 69) Playlist for The Witzard, for you to listen along to while reading.

"When did it all start," I ask myself? A lot of musicians have [sung] about hockey over the years, but from what I know, it started with "The Hockey Song" by Stompin' Tom Connors, a Canadian Folk singer, around 1972-73. Since then, many bands/artist have fit hockey into their music. Most of all, Punk bands have been adding their love of hockey to music for years. Call it Hockey Punk, Hockey-core, Puck Rock... doesn't matter what you call it, it's all in-your-face, fast-paced, and hard-hitting. Here [are] a few essential hockey-related records/CD's from my personal collection that you may enjoy. 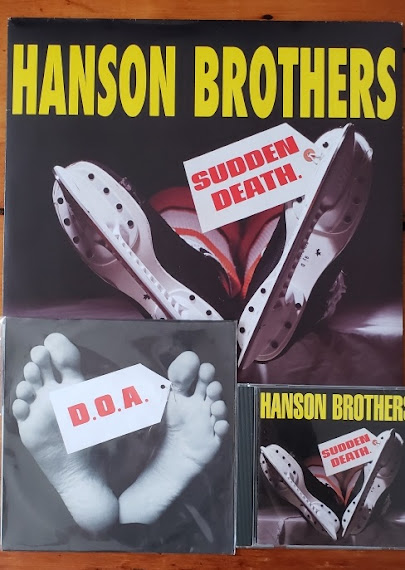 When you want to talk about Hockey Punk, how could you not start with The Ramones-loving Hanson Brothers out of Victoria/Vancouver Canada? The Hanson Brothers are members of Nomeansno, D.O.A. and a few other bands. Sudden Death is my favorite Hanson Brothers record and that's not easy to say because I really love them all. Originally, issued on CD by Virgin Music Canada and vinyl in The Netherlands only (1996.) Later on, Wrong Records released this record on vinyl. The cover is a play on D.O.A.'s "The Prisoner" 7-inch, as it should be, as Joey Sh*thead is a huge hockey fan and D.O.A. has done songs about hockey, as well.

Sh*t, my band even played hockey with them before a SXSW gig in Austin! They rolled up with nets and sticks to the gig. Playing hockey with Joey Sh*thead! The record starts off with a cover of Stompin' Tom Connors' "The Hockey Song." "OH! The good ol' hockey game, is the best game you can name. And the best game you can name, is the good ol' hockey game!" It just sets you up for a full-on great listen. Other great tracks include "Danielle (She Don't Care About Hockey,)" Stick Boy, "He Looked Alot Like Tiger Williams," and "Rink Rat." The Hanson Brothers' snotty, catchy as f**k Ramones-style of Punk Rock is in full-effect on this record. Johnny Hanson, also, has released two Puck Rock compilation CD's, Johnny Hanson Presents... Puck Rock, Vol. 1-2, which include over 40 songs about hockey. 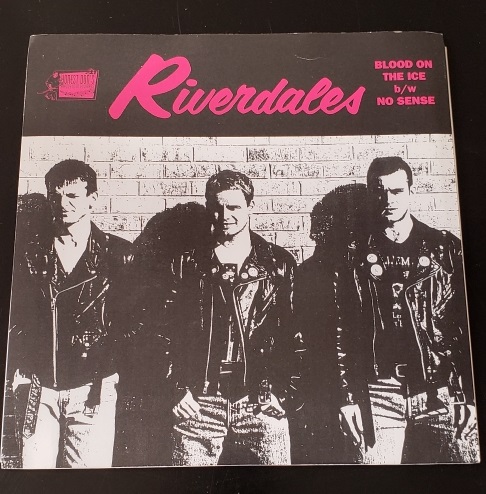 Speaking of Ramones-type bands, how can I not mention Chicago's [The] Riverdales. Ben Weasel [Screeching Weasel] and company released this great little single, "Blood On The Ice" / "No Sense" on Honest Don's Records. When I got this record in '97, it stayed on the turntable for the entire hockey season. My roommate and I would play it each time a fight would break out during a hockey game. It's just that kind of song that will get you pumped up. Who doesn't love to see blood on the ice? 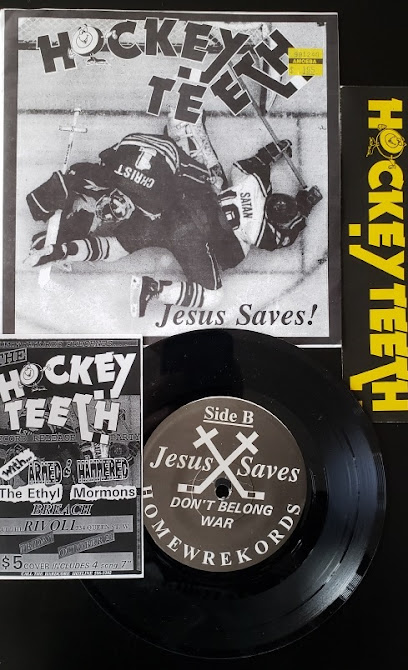 Fighting, as always, has been a big part of the game. People say the game is violent and there is no need for it. I'm an old school fan that thinks we need it in the game. It's all about protecting your #1 guy. You think Gretzky would have put numbers up like that without Marty McSorley protecting his skinny a$$? I bet McSorley has a fine set of hockey teeth because of it. Hockey Teeth a Hardcore Punk band from Toronto [from the] early 90's. The band itself focuses more on political content, but they get major props for the cover of their Jesus Saves! EP ("Jesus Saves, but Satan Scores on the rebound?") 4-song EP (1994) on Homewrekords. Not sure, if this band has any other releases... love the artwork on this 7-inch! 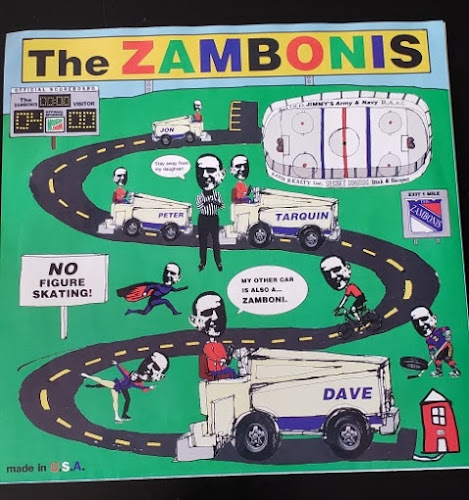 In-between periods, when it's time to take a p*ss and get another overpriced beer, you make your way back to your seat to watch the Zamboni clean the ice. It's the calm before the storm; sort of like the Pop Punk band, THE ZAMBONIS from Connecticut. I was super-excited to hear about a band from The East Coast that was doing stuff about hockey. I picked up the "Away Game," "Shot...Score!" / "The Referee's Daughter" 7-inch on Dot Dash Records (1995.) At first, I was p*ssed off. These CT dudes were using The NY Rangers' logo as a band logo on the record. I HATE The F**king Rangers, so how could I like THE ZAMBONIS? Shouldn't they be into The Harford Whalers? Anyway, I put my hatred towards The Rangers aside and accepted them as a Puck Rock band.

I still didn't love them, but that night, we played with them in Saratoga on a snowy night in front of maybe 10 people, that changed my perception. I remember hanging out with them and hearing all these crazy stories. They were complete characters, just like the goons in my band. They do exactly what we do: put the foil on each night and sing about hockey. They have their own f**king mascot for Christ sake! I mean that's almost as stupid as a band having a crowd instigator, like Two Man Advantage out of NY. 2 Man has been playing their brand of Hockey Punk since '97. Being that I'm in the band, I won't tell you more than we sing songs about hockey and drinking; two things we are very passionate about. Check out our latest EP, Bar Down. Six songs that will crush you, like a Clark Gillies hit! 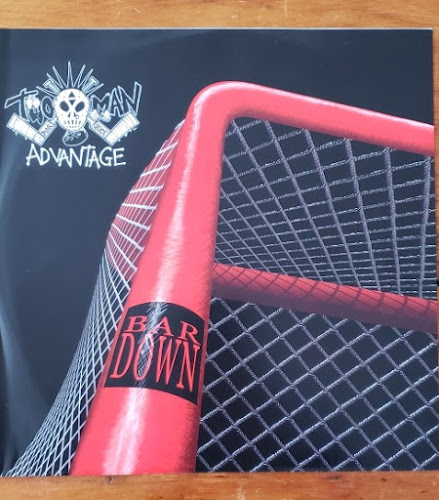 Back in 1977, the Paul Newman movie Slap Shot was released. The movie is about a sh*tty washed-up hockey team that uses violence to better themselves and make it to The Finals. What's not more Punk Rock than that? The soundtrack to the movie is not "Punk Rock" in ANY way, with tracks by Fleetwood Mac & Elton John, but there IS one song by British-born R&B singer Maxine Nightingale that brings the house down, "Right Back Where We Started From." A total classic cut by Maxine. Play that at your next Punk Rock party and have a blast. A total crowd-pleaser! 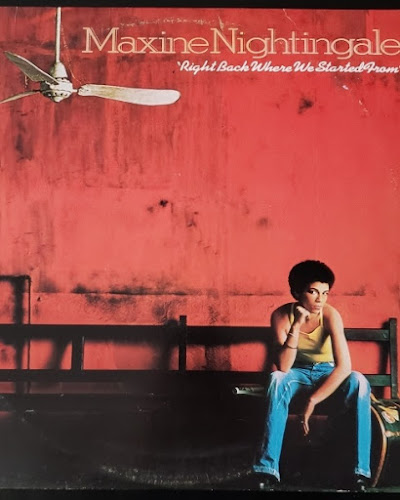 The movie, Slap Shot, had an influence on a few hockey-related Punk bands, including The Hanson Brothers, SLAPSHOT, and... did The McRackins take their name from Tim "Dr. Hook" McCracken? On their first CD, What Came First, they have a catchy hockey tune called "Slapshot." Just confirmed with one of The Eggs in The McRackins; they did not, but they got the name of the song from the movie Dr. Hook was in.

Everyone knows Hardcore band SLAPSHOT from Boston. On the record, Olde Tyme Hardcore (OTH,) it starts off with a clip of Coach/Player Reggie Dunlop ([from the] movie, Slap Shot) giving his speech on playing old time hockey, none of that goon sh*t, prior to The Championship Games. OTH is a straight up aggressive Hardcore record. It's like putting on the foil and getting ready to get out on the ice. Originally released on Tang [Records] on CD in '96. Pictured is a re-issue of the EP from 2012. 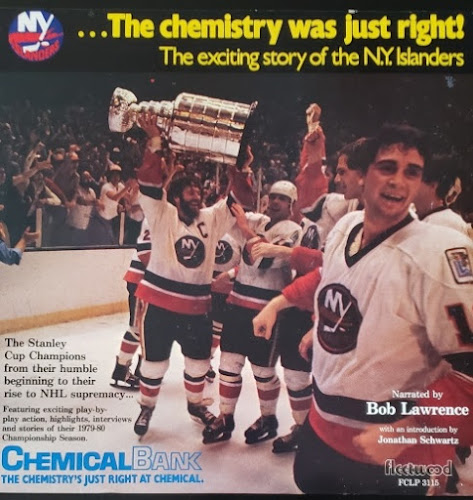 If you would ask me "what is my [most] prized hockey record," I will tell you that it's a $1.00 Bargain Bin record from 1980. Being a huge fan of my beloved Islanders, I had to seek out the fantastic narrated record, ...The chemistry was just right! The exciting story of the N.Y. Islanders. This amazing record captures play-by-play action, interviews, and stories of their 1979-80 Stanley Cup season. The first of four Cups in a row, that is. This record comes in handy right around now, that hockey has been postponed, due to the COVID-19 Pandemic. Nothing better than sitting home listening to the young Islanders beat The Kings, Bruins, Sabers, and Flyers to win their first Cup. I still get goose bumps when I hear Bob Bourne beats Gerry Cheevers (Boston Bruins) on the high side. Pop Punk band CHIXDIGGIT! sang about Gerry Cheevers on their Sub Pop self-titled debut with "(I Feel Like) (Gerry) Cheevers (Stitch Marks On My Heart.)" 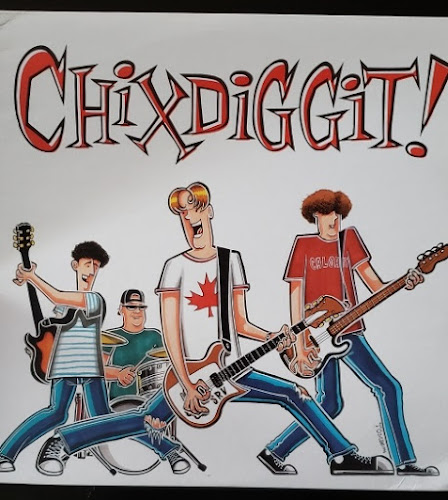 Posted by Matt Horowitz at 8:53 AM