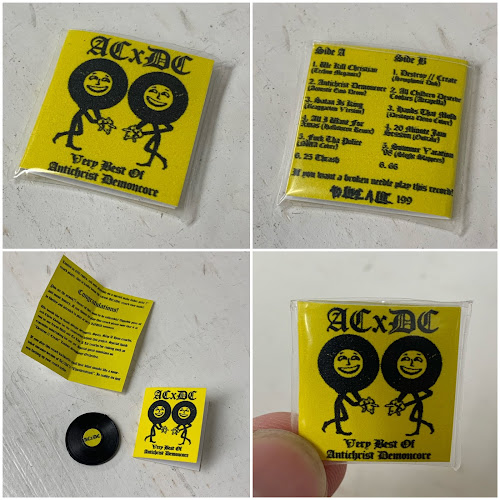 Slap A Ham Records was a Hardcore Punk, Thrashcore, and Grindcore label from San Francisco, California owned and operated by Chris Dodge from 1990 until about 2007. Dodge himself either is or was part of Ancient Chinese Secret, Angry White Boys, Bacteria Cult, Burn Your Bridges, Despise You, Duh, East/West Blast Test, Electro Static Orchestra, Hellnation, Infest, Lack of Interest, Legion of Doom, Low Threat Profile, Marxbros, No Use for A Name, Pig Heart Transplant, SPAZZ, Stikky, To The Point, and, most recently, Trappist. Across their 17 years of operation, Slap A Ham released a number of novelty records 1-2" in size that were released as non-playable "toy" records; most notably, SPAZZ's own Funky A$$ Lil' Platter 1" Noise E.P. (1996) and legendary Tokyo Power Violence crew Slight Slappers' Very Best of Slight Slappers 2" (1998.) Now, in tribute to both of the aforementioned 1-2" records, ACxDC AKA Antichrist Demoncore have effectively released their own 1" record, Very Best of Antichrist Demoncore. Originally, planned to be distibuted to close friends of the band, ACxDC have decided to auction off five 1" records to the highest bidders, the profits of which, will be donated to charity. Concocted as part of a collaboration with Raleigh, North Carolina-based To Live A Lie Records, Very best of Antichrist Demoncore has everything a real records has: sleeve, cover, insert, catalog number, and record complete with record labels. It appears as though, as of this publication, five 1" records are still being auctioned off on ACxDC's Instagram page with the current top bids being $120, $101, $100, $100, and, of course, $106.66. Bidding has since ended! Below, you can read the full description directly from @acxdc_666's original post. For those currently unable to shell out between $100-120 for a novelty 1" record, The Very Best Of Antichrist Demoncore is now available to stream, purchase, or download, exclusively on Bandcamp, as well. ACxDC's latest normally-sized record, Satan Is King, is now available on Prosthetic Records.


"Okay, here it is. A 1" record (0.8," to be exact) featuring the best of ACxDC. Put out in collaboration with @tolivealie. These were originally going to be handed out to friends only. We'll be selling 5 to the highest bidders and donating the money. The design is based on... the Slight Slappers 2" toy record, but it's constructed in a similar manner to the SPAZZ Funky A$$ Little Platter 1" record. It has everything a record has: sleeve, cover, insert, catalog number, and record with record labels."