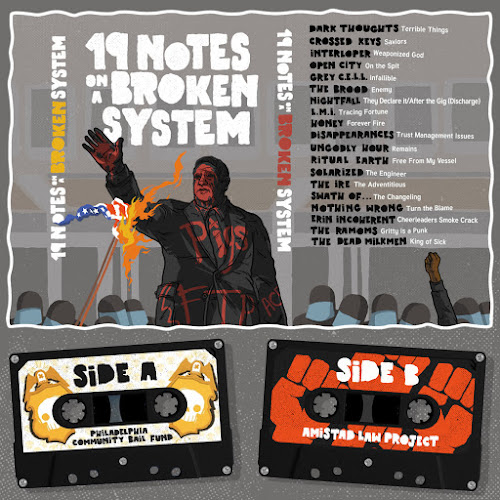 19 NOTES ON A BROKEN SYSTEM: A BENEFIT COMP. FOR AMISTAD LAW PROJECT & PHILADELPHIA COMMUNITY BAIL FUND is a benefit compilation organized by Derik Moore (Grey C.E.L.L. Citizens Arrest) and a bunch of his musical friends from in and around Philly. It was entirely coordinated, arranged, and released on both cassette tape and digital formats in just under two weeks as a direct result of the May 25, 2020 death of George Floyd, as well as "the institutionalized racism and brutality that has been perpetrated by police throughout American history." As its title suggests, 19 Notes On A Broken System boasts 19 tracks from artists located in and and around the Philadelphia area. Said comp. showcases contributions from DARK THOUGHTS, Crossed Keys, Interloper, Open City, Grey C.E.L.L. The Brood, Nightfall covering Discharge, L.M.I. Honey, Disappearances, Ungodly Hour, Ritual Earth, Solarized, The Ire, Swath of... Nothing Wrong, Erin Incoherent, THE RAMOMS, and The Dead Milkmen; with new, exclusive, or previously unreleased contributions from Dead Milkmen, Disappearances, Honey, Interloper, Nightfall, Swath of... Ungoldly Hour.


Also, of particular note, for us here at The Witzard, at least, are 19 Notes On A Broken System's appearances from DARK THOUGHTS, The Ire (both featuring Daniel Cox,) Open City featuring Lifetime frontman Dr. Dan Yemin AND Titus Andronicus drummer Chris Wilson, Honey, a Thrash/Punk band with ex-members of Turning Point, Guts of The Ice interview subjects THE RAMOMS and their stand-out, "Gritty is A Punk," and Philly Punk/Indie Rock greats, The Dead Milkmen, here, with a brand new track, "King of Sick." Although, best of all, 100% of the proceeds raised from both physical cassette sales, which are already completely SOLD OUT, and ongoing digital sales will be donated directly to The Philadelphia Community Bail Fund & Amistad Law Project. Below, you can read more about 19 Notes On A Broken System directly from its curator, Derik Moore, and if you feel so inclined, you can purchase/donate directly to the cause on Bandcamp. Shout-out to NO ECHO contributor Michael D. Thorn for first alerting us about this comp. and a special shout-out goes out to Ginger "Ramom" Knight for supplying us with additional contact information!


"This project is designed to raise funds for The Philadelphia Community Bail Fund & Amistad Law Project as a means for Philly bands to donate their work in support of those arrested and held on cash bail during the city-wide insurrection sparked by the May 25, 2020 murder of George Floyd and the institutionalized racism and brutality that has been perpetrated by police throughout American history. 100% of money raised will directly support the ongoing work these two organizations do. This compilation is free for BIPOC [Black, Indigenous, People of Color]. Please, email 19notesphilly@gmail.com for a copy..."

Posted by Matt Horowitz at 9:30 AM