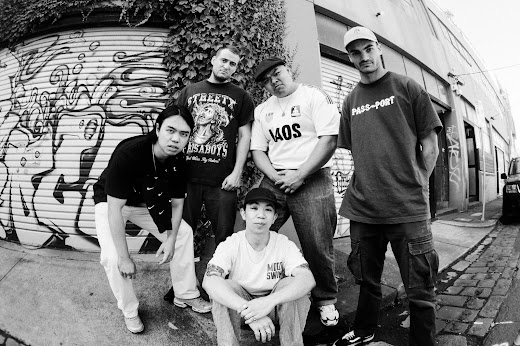 SPEED are an Australian Hardcore band and new signees to Baltimore-based Flatspot Records. SPEED's line-up consists of Jem Siow, Dennis Vichidvongsa, Aaron Siow, Joshua "Josh" Clayton, and Kane Vardon with little else widely known. However, a press release explains, "the majority of SPEED's members are of Southeast Asian descent; drawing strength from its members' diverse cultural perspectives, SPEED makes it a point to stand up, not only against racism and xenophobia, but, also, the toxic masculinity and gender prejudices that have crept their way into Hardcore." SPEED have only been around for a few short years, but produce a very unique brand of pummeling 90's-reminiscent Metallic Hardcore. SPEED's Old School Hardcore sound evokes comparisons to greats, such as Madballs, Biohazard, and Agnostic Front. Last year, SPEED released their debut collection on Australian imprint Last Ride Records, a 5-song demo simply titled DEMO '19.


Now, they've returned with their second proper release, 2020 FLEX, which was just released this past Friday on Last Ride Records in conjunction with Flatspot Records. It's a 2-song single containing wonderfully-titled "A DUMB DOG GETS FLOGGED" & "DEVIL U KNOW," both available digitally, as well as red flexi-disc 7-inch vinyl on Last Ride and blue flexi-disc on Flatspot. SPEED, additionally, announced their plans to donate all webstore profits from the release with 50% going to The Bail Project in The US and 50% going to Sisters Inside in Australia. Speaking on 2020 FLEX, SPEED vocalist Jem Siow shared, "this song was born in reaction to the failed leadership of our government during the 2019-20 Australian Bushfires. Empathy and compassion should always be the premise for meaningful action. We're super-humbled to have Flatspot Records (US) team up with Last Ride (AU) on this release to help open our Australian doors to the world." SPEED's 2020 FLEX is out now, via Flatspot Records & Last Ride Records.

Posted by Matt Horowitz at 9:57 AM