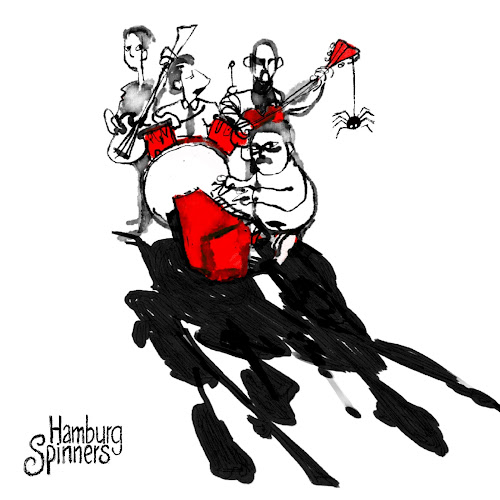 
Not unlike their whole forthcoming album, "Palmaillerennen" was cut live over a weekend this past May at Hamburg's own Yeah!Yeah!Yeah!-Studios. It boasts a laid-back Jazz/Library Music style similar in nature to that of The Soul Surfers, Bacao Rhythm & Steel Band (of which david Nesselhauf is a member,) The M-Tet, Brownout/Brown Sabbath, Clutchy Hopkins, and my trippin' mojo. "Palmaillerennen" is the kidn of msuic you could easily hear flipped into a sample by a green-horn Hip-Hop producer, akin to The Hitmen & Skyz Muzik sampling Menahan Street Band's "Make The Road By Walking" on "Roc Boys (And The Winner Is)..." from JAY-Z's 2007 concept album, American Gangster. Below, you'll see a companion performance video for "Palmaillerennen" recorded in-studio at Yeah!Yeah!Yeah!-Studios. With all that said, it will be interesting to hear what The Hamburg Spinners have in store for us on their upcoming debut full-length album. Said album, Skorpion im Stiefel, will be widely released in both digital and physical (vinyl) formats 11/13 on Légère Recordings/Asexy Records.