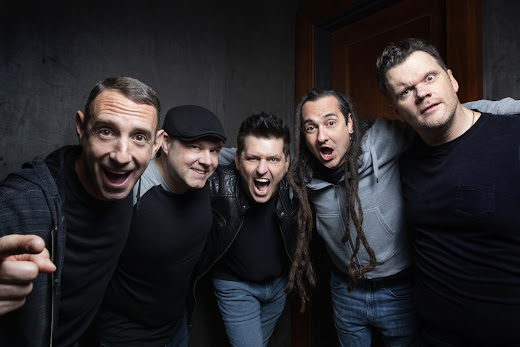 Less Than Jake (LTJ) are without a doubt Ska Punk stalwarts, at this stage of their career, having been a non-stop touring machine for the past 30 years. LTJ have been one of my personal favorite bands for quite some time now and they're, honestly, one of the bands I've seen live the most. Way back when, in The Witzard's earliest aughts, we conducted an interview (better yet, a Twitter-view) via Twitter, with long-time LTJ bassist and co-vocalist Roger "Lima" Manganelli. Plus, we've spoken with both guitarist/co-vocalist Chris DeMakes and former drummer/pseudo-frontman Vinnie Fiorello on seperate occasions, but never for an actual published interview. Less Than Jake are easily one of the most fun charismatic bands I've ever seen live and one time, in Philly at The TLA, they even invited the entire crowd (well, anyone 21+) to accompany them to the bar for post-show beers.


Oddly enough, my older cousin, Josh, had passed me down a shoe box-full of hand-me-down cassettes and burned CD-R's around the same time; it included a bunch of LTJ mixtapes, plus, some Richard Cheese & Lounge Against The Machine, Beastie Boys, Phish, The String Cheese Incident, and, of course, "Weird" Al Yankovic. While my personal favorite Less Than Jake release has always been 2003's Anthem, they have been stadily releasing infectious records ever since 1992. These hand-dubbed LTJ mixtapes were my first exposure to Ska/Ska Punk and I have to admit, it rocked my world! I'll always be grateful to my cousins Josh & Adam for exposing me to such awesome much, most of which, I still enjoy today, at such a young age. Since their last proper full-length, 2017's Sound The Alarm, LTJ have stayed somewhat quiet, but recently started releasing tracks from their Lost At Home Sessions.


"Being cooped up at home like the rest of you, we thought it would be fun to keep the creative juices flowing and see if we could make music from five separate locations. That's right, we've never played these songs together and this is kind of like an experiment, but we're gonna have fun!" Less Than Jake explained on their Bandcamp page. Closing their description with this rather mysterious tidbit, "This is NOT TO BE CONFUSED with our new album, set for release later this year." Just yesterday, we recieved an email from a publicity firm representing LTJ properly announcing their new single, "Lie to Me," as well as their aforementioned new album, Silver Linings. "We made a new record! Our first full-length with our new drummer, Matt Yonker, and it sounds amazing," shares vocalist/guitarist Chris DeMakes.


"More vocal hooks than a tackle box, horns galore, and that bombastic and upbeat energy that we're known for. We didn't try to re-invent the wheel with this one, it's still undeniably Less Than Jake. Just a bit punchier and in-your-face. We can't wait for our fans to hear it!" Roger Lima on how it feels to still be writing music together after so many years: "It's still so freaking exciting!! After decades of working on songs together, we still love it, and with our new drummer, Matt Yonker, we feel re-ignited and re-fueled. Personally, I feel that this is the first step of a new era for the band. While the music feels undeniably Less Than Jake, the flow of the tracks and the attitude of the horns and lyrics have a freshness to them and I look forward to sharing these songs with our amazing fans." Honestly, from a long-time fan's perspective, it's a bit sad to hear Less Than Jake without their long-time drummer/pseudo-frontman Vinnie Fiorello (he's busy with his own new band, The Inevitables) but it's great to see LTJ back in action! Less Than Jake's Silver Linings is out 12/11 on Pure Noise Records. "Lie to Me" is now available on your digital streaming platform of choice.