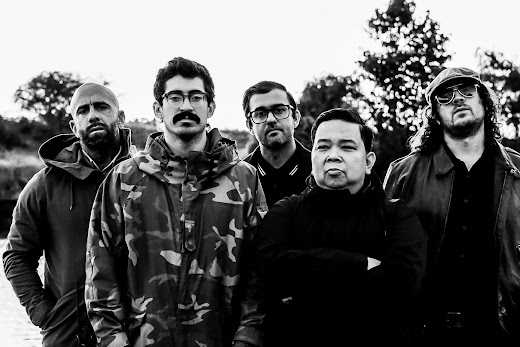 Last Friday was yet another Bandcamp Friday event, wherein Bandcamp have vowed to waive 100% of their revenue share on all sales on the first Friday of every month giving musicians more money from each purchase. One of our personal favorites, Houston, Texas-based Skinhead Punk/Hardcore crew Liberty & Justice, returned just in time with another exclusive Bandcamp Friday special. It's a quick-strike 3-track EP entitled my america. Liberty & Justice made a number of exclusive packages available, including a 32-piece run of limited press cassette tapes, a limited edition "yellow a** shirt," a special T-shirt/tape combo, and, of course, digital EP. While we purchased one of the last my america EP cassettes (there's currently ONE left!) on Bandcamp Friday, we reached out to East End Barber owner and Liberty & Justice frontman Ryan "Crowns" Taylor this weekend for some additional information concering said release.


"my america is a small collection of tracks recorded over late Summer 2020 in our practice space by our guitarist, Ramzi Beshara. It's our attempt at encapsulating the climate of our personal lives and our community over the past eight months. We've, personally, witnessed too many deaths close to us in the past few months; countless friends and loved ones sick. Numerous friends and loved ones out of work, businesses shutting down, while major corporations get bail-outs," Ryan Taylor explained, via email. "Common sense scoffed at... fighting for the marginalized and pushing against injustice thought of as some sort of Communist ploy. We're, truly, living in some sort of wild Rod Serling story. So, we recorded a new one that Halston [Luna] had written the riff for (if you listen to the hook, it's a Paul Abdul song [on] "a new town,") then, "solitary confinement," which is a Members cover, and, then, decided to breathe new life into "cachitos song" by doing an acoustic version of it," he continued.


Also, when we asked about this mysterious photo posted to @libertyandjusticeofficial's Instagram page over ther weekend, Ryan Crowns responded: "That photo is of me and the singer of Killer Hearts. We're releasing a split 7-inch with them, hopefully, sooner than later." Yes, it appears as though Liberty & Justice and their fellow Houston-bred Glam Rock/Punk counterparts Killer Hearts are cooking up a sizzlin' hot split 7-inch together! We strongly recommend checking out both Liberty & Justice and Killer Hearts on their respective Bandcamp pages. Liberty & Justice's previously released collection of charitable one-offs, non-album singles, and unexpected covers is now available on Bandcamp, along with an exclusive track-by-track breakdown concocted exclusively for The Witzard. Liberty & Justice's my america EP is now available on Bandcamp (even though Bandcamp Friday has passed) as well as digital streaming platforms, via sisster sound.