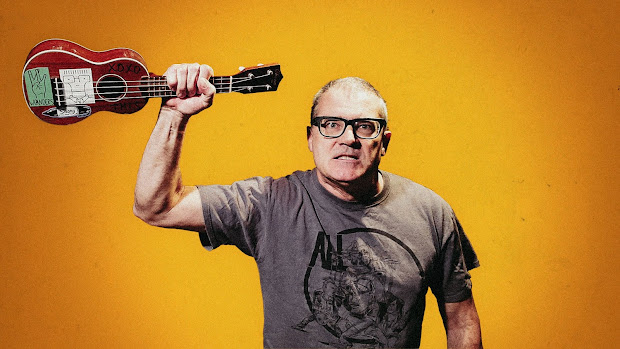 Long-time Descendents frontman and pseudo-mascot Milo Aukerman has re-emerged with the announcement his first-ever proper solo project, RebUke. Aukerman has been the primary vocalist for Descendents since 1980 (three years post-formation) and sporadically, yet consistently, ever since. Through the years, all the while, functioning as Descendents' frontman, Milo Aukerman conducted post-doctoral research in Molecular Biology at The Universities of Wisconsin–Madison & Pennsylvania, as well as working as a plant researcher at DuPont and an adjunct professor at The University of Delaware. However, it appears as though Aukerman has decided to forgo his aforementioned careers, as of 2016, in an effort to focus on music and Descendents and music full-time. It appears as though Milo has since amassed quite a passion for ukuleles, as his freshly-announced solo project, RebUke—emphasis on "uke"—is, of course, primarily ukelele-based.


Earlier this year, Descendents (or, maybe, just Milo?) appeared on THE HOUSE THAT BRADLEY BUILT an acoustic-centric comp. organized by LAW Records "benefiting The Nowell Family Foundation to get Bradley's House built!" Bradley Nowell and his short-lived band, Sublime, infamoulsy covered "Hope" from Milo Goes to College (1982) across their 1992 debut, 40oz. to Freedom. So, for THE HOUSE THAT BRADLEY BUILT, Descendents effectively "covered" themselves contrbuting an acoutsic rendition of "Hope" played on Milo's coveted six-string ukulele, also known as a "guitarlele." So, all of this brings us, in an extremely 'round-about fashion, to RebUke's debut single, 45... not a LP. It's being billed as Milo's "politically-focused ukulele project," which will "examine the current political state of The United States and the feeling of outrage and uncertainty that has intensified over the years."


Milo Aukerman himself explains his direct sources of inspiration like this: "I've spent most of my Punk Rock life avoiding the temptation to write political songs; it always seemed like politics is the obvious go-to subject of Punk and, thus, not of interest to me," explains Aukerman. "Unfortunately, after the 2016 US Presidential Election, I find myself virtually unable to write songs about anything else." For 45... not a LP, Milo utilizes an array of various types of ukuleles, including his six-string "guitarlele," a soprano uke, an electric uke, and a bass uke, as well as tabla drums and a cowbell. 45... not a LP—a clever title alluding to the fact that "45" (President Tr*mp) is, indeed, not a "LP" AKA long-player—features three songs, "On You," "Hindsight 2020," and "Royal Flush," clocking in at a combined total of just under seven minutes. "Hindsight 2020" features additional musical accompaniment provided by Aukerman's long-time Descendents bandmate Stephen Egerton.


45... not a LP closer "Royal Flush" boasts an appearance from someone referred to only as "Rotten James Dio," which seems to simply be a clever allusion to Ritchie Blackmore, Paul Thomas Cook, Ronnie James Dio, Steve Jones, John Lydon, Glen Matlock, and Cozy Powell, all one-time members of Dio/Rainbow & The Sex Pistols, respectively. We've included music videos for all three 45... not a LP tracks below, all of which were filmed by Milo Aukerman and edited by Eric Richter with art provided by Jason Link. RebUke's 45... not a LP is now available to pre-order on both color/standard black 7-inch from Fat Wreck Chords and digitally on Epitaph. 45... not an LP 7-inch pre-orders are expected to ship by or before November 18, 2020. GO VOTE!