All-around Breakdown: Miggs Son Daddy's "I Jacked This Beat from..." for The Miggstape, Vol. 3 Breakdown F.E.B. (Four Elements & Beyond) 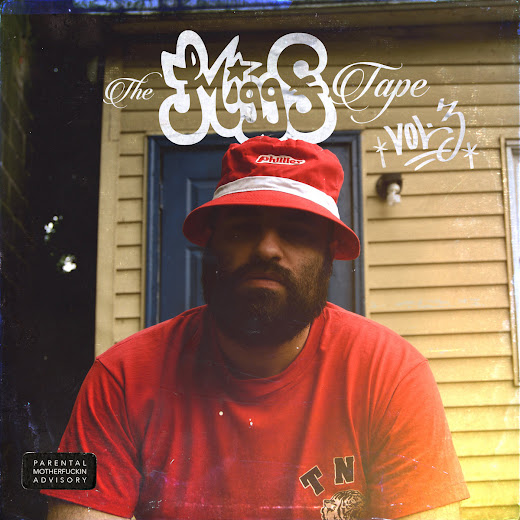 The Miggstape, Vol. 1 came [out] Summer of 2009 and was, ultimately, a barrel of everything I'd recorded up until that point; sketches of what was to come. I spent the next three years performing and writing with my band, Word of Mouth, other Savannah artists, and my group, F.E.B. back in NY, building and getting a bit sharper. I put out The Miggstape, Vol. 2 just in time to take it on my first tour Summer of 2013. Between then and now, I've released more solo material, as well as collaborative albums. I always wanted to do a third installment to, possibly, cap the series, but who knows. Once this whole COVID bullsh*t started and we were shut in the house, luckily, the only thing I "caught" was The Holy Spirit.

I wrote and recorded 11 of these 15 tracks in the crib over the summer and threw four joints on there that were already released. BOOM! In the meantime, my group F.E.B. (Four Elements & Beyond) have been marinating a handful of new tracks toward our first full-length group album. No title or date. Just wait... WRD Life of F.E.B. has, also, been ON FIRE this year with a few guest appearances and a slew of singles in anticipation for his new album, Spanish Ni**az, as well as some other collaborative EP's in-the-works. We've found ourselves pretty busy and quite productive recently. Now's a good time to get familiar and stay in-the-loop."

01. "Third Time's A Charm" - I jacked this beat from the DJ Babu episode of Mass Appeal's Rhythm Roulette. I've always been a fan of Babu, he's a true master. And I really wanted to flip someone's Rhythm Roulette beat and Babu KIIIIILLED it with this. Thought it was perfect to set the mixtape off with.


02. "Soul Krushin'" - I jacked this beat from Joey Bada$$' "Christ Conscious" produced by Basquiat because, SON! that track is so dope. Joey, apparently, discovered the beat by searching "Joey Bada$$ type beat" and this joint was the first thing he saw. There's not many "Miggs type beats" out there, so be careful. If your beat is deemed "Miggs type," it might get commandeered.


03. "So Good" - I jacked this beat from The Four Owls' "Burning Vapours" produced by Leaf Dog. Huge fan of Leaf Dog, The Four Owls, and High Focus as a whole. They have such great quality, consistent work coming out all the time; it's really enough to keep you occupied for a long time, if you dig in. Just felt like a joint I needed to flex on. Just felt so good...


04. "Fractals" - I jacked this beat from Lord Finesse's "Down for The Underground" produced by Buckwild. This is my quintessential type of beat. Smooth, dusty piano, hard Boom-Bap drums... perfection. Shouts to D.I.T.C.


05. "Run The Beat" [Feat. F.E.B.] - I jacked this beat from [Run The Jewel's] "Ooh LA LA" produced by El-P. I mean, as soon as that song dropped, I was like, "Ooooooh, la la, gimme that beat!" Love the Greg Nice and [DJ Premier] feature. It's very different from their other stuff, but, obviously, slaps. Had to call my brothers to join, once I decided to flip the hook.


06. "Lunch" - I jacked this beat from [WestsideGunn] & Meyhem Lauren's "Over Gold" produced by Daringer. I don't remember that song being particularly popular, but, man, that beat is a killer. This is the oldest track on the mixtape and it's tried and true. Definitely a crowd (and personal) favorite.


07. "Not for Sale" [Feat. WRD Life] - I jacked this beat from Evidence's "Sell Me This Pen" produced by The Alchemist. I mean... it's just nasty. Nasty drums that needed despicable bars. I heard WRD Life on it so we just threw our F-Dot seasoning on it.


08. "Upper Deck" [Feat. Freak Tha Monsta] - I jacked this beat from PUSHA T's "Untouchable" produced by Timbaland. My brother, Freak Tha Monsta, and I been literally "battin' back-to-back since LT quit crack." Growing up as athletes and sports enthusiasts, the sports references are embedded throughout all our rhymes, anyway, so we just decided to make a whole track and indulge.


09. "Abstract" - I jacked this beat from Atmosphere's "Adjust" produced by Ant. I talk a lotta sh*t; I'm aware of that. The moodiness in this beat just brought out my disgust and intolerance for rappers who think their sh*t is untouchable when, clearly, I'm better.


10."Check The Method" - Ahh, man! I jacked this beat from the intro to Common's "In My Own World" produced by No I.D. I love Resurrection; I think, it's a flawless album, actually. But Common not spitting over those 8-bars of FLAMES before "In My Own World" comes on would be a flaw, if it weren't such a blessing to me, personally.


11. "Illuminate" - I'm, actually, really glad I get to explain this one. I've had this beat for like seven years. It was the classic, "Hey, a friend of a friend makes beats. Check 'em out" situation, but this one stuck with me. Might have been the Pink Floyd sample or just the overall vibe. I really wanted to hear what I could do with it. I've always believed: why spend your energy complaining about how much you hate terrible music, when you could be shining a light on what you do rock with? They say, "give them flowers while they're here," so I wanted to big-up some of the artists I've sparred with, collaborated with, did shows with, or who I'm just inspired by. I've been making music for quite some time and, honestly, it's not the super-stars that motivate me. It's the incredibly dope artists I've met and learned about in my travels that push me to keep creating. Big shout to Mike Darling for producing this beat.


12. "Blessings" - Another original beat. This one produced by my homie, Black Ceaser. Black Ceaser is such a wonder. He's like a new DJ Premier. From The South, but captures the NY feel oh so well. I, actually, had a hard time writing to this because his beats tell stories all on their own. I feel like I just wrote a small poem in the center of a majestic scroll of papyrus.


13."Grand Design" [Feat. Freak Tha Monsta] - I jacked this beat from the Griselda "Fire In The Booth" freestyle produced by Daringer. It's just too slick to not put the flame to it. Freak [Tha Monsta] said, "let's do it!" so, we did it.


14. "Marsten House Quarantine Cypher" - Big, big shout to Marsten House in Philly. This is a legendary cypher network that I was familiar with before I moved to Philly. Once I was here, and met a bunch of the regulars and the guys behind-the-scenes, I was honored to be taken in. Such solid and talented people associated with them. Right as The Quarantine was put in place, they decided to embrace the new format and run a virtual cypher. Marsten House producer Wigshop on the beat!


15. "I Don't" - I jacked this beat from Cardi B & SZA's "I Do" produced by Murda Beatz. Okay... I would NOT have thought to rhyme on a Cardi B instrumental, but the wife said, "it'll be great!" I said, "fine, but I have no idea what I'd even rhyme about." She said, "make it about conspiracy theories" and I, begrudgingly, agreed to give it a shot. Turns out, it was a blast to make this track and reveal "the truth" that The Matrix has been trying to distract us from.