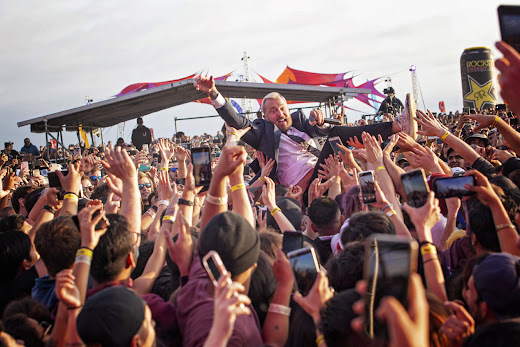 It's been previously discussed right here across these pages of The Witzard, but the various Tony Hawk's Pro Skater (THPS) in-game soundtracks were very influential on my musical tastes as a young adult. Being the oldest of two kids, my four older cousins and my close friend/musical mentor, Jason, were, luckily, alwats exposing me to interesting music I probably wouldn't have discovered on my own. However, the soundtracks for THPS 1-4, were really the first time I had "discovered" music on my own—most of which, I still listen to to this day—including, but not limited to, Dead Kennedys, Goldfinger, Primus, Bad Religion, Del The Funky Homosapien, De La Soul, NWA, and much, much more. However, of particular note were Los Angeles-based Third-wave Ska/Punk band Goldfinger, whose "Superman," essentially, became the unofficial theme song to Tony Hawk's Pro Skater (1) and equally strong "Spokesman" later, appeared on THPS4.


Goldfinger, like most Punk/Hardcore bands, have gone through their fair share of line-up changes over the years, but they're still active to this day, 26 years post-formation. I can, personally, remember puchasing Goldfinger's 2002 album, Open Your Eyes, at either FYE or The Wall with my lawn-mowing money and vividly recall being blown away by its awesomeness and unabashedly unapologetic Ska-ness. Aside from their appearances within the THPS series, many people may know Goldfinger from their widely-loved covers of Nena's "99 Luftballoons," The Cure's "Just Like Heaven," Duran Duran's "Rio," Joe Jackson's "Is She Really Going Out with Him?" Bad Company's "Feel Like Making Love," The Who's "The Kids Are Alright," or The Misfits' "Ghouls Night Out." Frontman John "Feldy" Feldmann now runs his own record label/multi-faceted media company, Big Noise Music Group, and in recent years, has either produced, co-produced, written, engineered, mixed, etc. albums for everyone from Good Charlotte to Hilary Duff and blink-182 to The Struts.


It appears as though Goldfinger's current line-up consists of Feldmann, newly re-joined guitarist Charlie Paulson, bassist Mike Herrera (also, of MxPx,) guitarist Phil "Moon" Sneed" and newest mmeber, drummer Nick Gross. Gross is, in fact, the CEO of Big Noise and plays drums with drums for Alt. Pop Rock band Half The Animal, as well as girlfriends, is the founder of Gross Labs, and an education-based platform, Find Your Grind. girlfriends, Nick Gross' latest Pop-punk band with Travis Mills, is currently prepping their debut self-titled album, as produced by John Feldmann himself, for Big Noise. So far, girlfriends have unleasehd two extremely successful and well-recieved singles, "California" and "Eyes Wide Shut," both of which vaguely evoke Goldfinger, blink-182, All Time Low, etc. But back to Goldfinger... Feldy & Company recently returned with their first single since 2017's Travis Barker-assisted The Knife and first new music since launching their Quarantine Videos series.


Just this past Friday, Goldfinger shared their latest single, "Wallflower," ahead of their long-rumored and, supposedly, soon forthcoming album. "This song is written for my wife, who is truly everything to me," shares Feldmann on the personal track. "Until she found her place in LA, she was a bit of a wallflower, but she was always with me. I, also, have an emotional attachment to the film, Perks of Being A Wallflower, so combining that art with our classic Space Girl imagery seemed like it tied it all together." John Feldmann recently explained "'Wallflower" was the last song I wrote for our upcoming album" withinin an exclusive interview with Alternative Press. "It's coming out later this year on my own label (Big Noise) and that just is a very full-circle moment that I am so proud of," Feldmann continued. Both Goldfinger's "Wallflower" and girlfriends' "California" & "Eyes Wide Shut" are currently availabel for streaming, compliments of Big Noise. girlfriends' self-titled debut will be reelased 10/23 on Big Noise with Goldfinger's as-yet-to-be-titled album soon forthcoming.