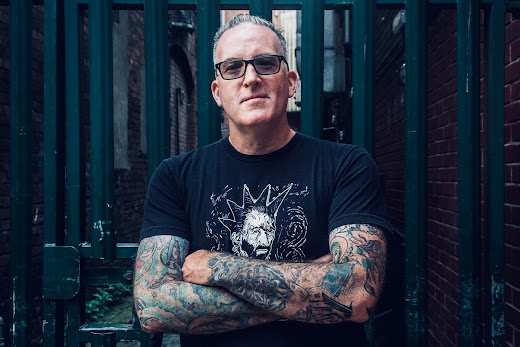 DO WHAT YOU WANT Author Jim Ruland (CREDIT: Clair McAllister)

"No one has ever confused Bad Religion with The Misfits, but that doesn't mean they don't have some scary songs. The band's predilection for pin-pointing (and predicting) society's worst-case scenarios and constant reminders that we're heading for annihilation mean the landscape for a Bad Religion song can be downright terrifying. Here are 13 songs that showcase the spooky side of Bad Religion that you can listen to alongside the voices in your head in the room inside your room. Of course, with The Pandemic showing no sign of ending due to The Tr*mp Administration's gross mismanagement, you could just play "We're Only Gonna Die (from Our Own Arrogance)" over and over again until there are no humans left," author Jim "Vermin" Ruland told The Witzard, via email. Ruland recently co-wrote Do What You Want: The Story of Bad Religion along with the band themselves. We've recently been in contact with Jim Ruland and asked him to curate an installment of our recurring Punk/Hardcore playlist column, With The Quickness. As alluded to above, Ruland took it upon himself to curate a slightly more spooky Bad Religion-themed playlist just in time for Halloween.


Jim Ruland is the author of the award-winning novel Forest of Fortune and the short story collection Big Lonesome. He is the co-author of My Damage with Keith Morris, founding member of Black Flag, Circle Jerks & OFF! and Giving The Finger with Scott Campbell, Jr. of Discovery Channel's Deadliest Catch. Jim writes about Punk & Pop Culture for Razorcake—America's only non-profit independent music 'zine. He, also, writes book reviews and author profiles for The Los Angeles Times and The Los Angeles Review of Books. Jim's work has appeared in numerous publications, including The Believer, Electric Literature, Esquire, Granta, Hobart, and Oxford American, and has received awards from Reader's Digest and The National Endowment for The Arts. He runs the Southern California-based reading series Vermin on The Mount, and is a member of the Golondrina arts collective in Barrio Logan.

Jim is a veteran of The US Navy and has worked for advertising agencies, entertainment enterprises, and the gaming industry. He is available for copywriting, ghostwriting, editing, and consultation. Jim lives in Southern California and is an avid enthusiast of Punk Rock music, tattoo culture, and strong coffee. You can subscribe to his Substack Newsletter, Message from The Underworld, fittingly described as "Books, music, and miscellaneous mayhem" right here.

Do What You Want tells the story of four teenagers in The San Fernando Valley who changed Rock "N" Roll with their unique blend of Melodic Hardcore, harmonizing vocals, and intelligent lyrics. For the first time, the complete 40-year history of Bad Religion is told with full cooperation and support of the band. The result of extensive interviews with current and former members, Do What You Want is essential reading for fans of Punk, Rock, and Pop music.