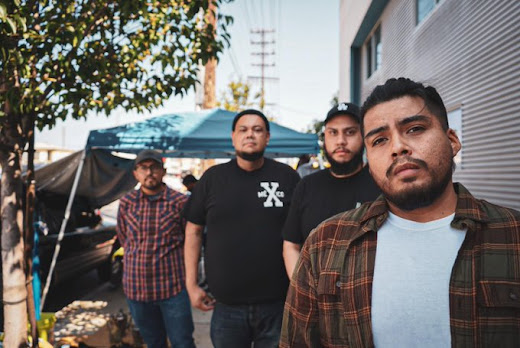 YŌKAI' is a Hardcore band based out of South Central, Los Angeles. Bassist Hector Rivera (@odiocore) recently reached out to us directly after seeing our interview with WORLD BE FREE guitarist Andrew Kline. So, in addition to being part of both Ska revivalists MATAMOSKA! and Ska/Hardcore band Mafia Rusa, Rivera is, alsp, part of a straight-up Hardcore band by way of YŌKAI'. Their current line-up includes Rivera on bass along with guitarist Johnny Vallejo, vocalist Danny Ortiz, and drummer Jairo Avila. Thus far, YŌKAI's ever-growing discography includes a 2016 EP entitled Reap What You Sow and a 2020 2-track single dubbed 2020/776-66. Reap What You Sow was engineered by Taylor Young (Twitching Tongues, Code Orange, DRAIN) at The Pit Recording Studio and mastered by Brad Boatright at Audio Siege Mastering Studio.


2020/776-66, on the other hand, was recorded and mixed by Hector Rivera's MATAMOSKA! bandmate Esteban Flores and mastered By Curtis Irie. Reap What You Sow EP clockins in at less than 10 minutes, while 2020/776-66's two tracks, "Rigged" & "Yeah, Nah." are collectively done before the 3-minute mark. Both YŌKAI' seem to incorporate a bit of sampled audio interpolated into their tracks' outros with "Yeah, Nah." featuring Guillermo Díaz AKA Scarface's infamous rant, "f**k you, f**k you, f**k you... you're cool... and f**k you, I'm out!" from Half Baked. Reap What You Sow's opener "Heads or Tails" features Sasha Jenson as Don Dawson from Dazed & Confused's iconic monlogue: "well, all I'm saying is that I want to look back and say that I did I the best I could while I was stuck in this place. Had as much fun as I could while I was stuck in this place. Played as hard as I could while I was stuck in this place..." within its intro, but we can't place where exactly that outro dialogue is from, though.


YŌKAI' are currently wrapping up their as-yet-to-be-titled full-length for a planned 2021 release. Taylor Young, who worked on YŌKAI's upcoming full-length, had this to say about the band: "those guys are some the easiest to work with. Really cool pure Hardcore mentality from them and very open to ideas and they have a ton of great ones themselves." Additionally, Young described their upcoming full-length collaboration as sounding like "ROTTING OUT meets TERROR." YŌKAI's Reap What You Sow EP and 2020/776-66 single are both available on Bandcamp, as well as on stremaing services. Hector "Odiocore" Rivera's other other side-band, Mafia Rusa, recently released their own latest Bandcamp single, "PRELUDIO AL CAOS."