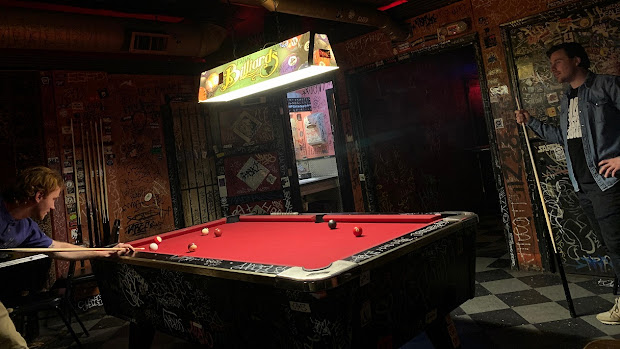 "PGH to PHL. Cody & Don have been yucking it up as pals and collaborators for years, but up until now, they have never done a full album together," reads a description on Bandcamp. ialive & Cody Cody Jones (then, known as Stillborn Identity) have been working together sporadically ever since 2015-16. ialive appeared alongside Cody on Jumbled-produced "Groundhog Day" from STLBRNcollabamonth2015. "Often succumbing to areas of internal turmoil, we see the boys letting go of inhibitions, flipping the script, and cutting loose on tracks like a dirtbike through dry leaves," said description continues. Through 2017, Cody Cody Jones & ialive released two collaborative digital splits together entitled FOUR TO THE FLOOR 1-2. ialive appeared alongside Blastmaster Baker on "Call of The Void" from Cody's monthly/year-long 2018 project, Year of The Dog. Rap of The Month.

ialive & Cody Cody Jones have since worked together on a number of occasions, including "The Four Man Correct Style" with Yikes The Zero & Height Keech from Timewave Zero, "Chip Clip" from Cody's own Follow Your Heart And You'll End Up Alone, Darko The Super's "We're All Darko" & "Some Dean Martin Bullsh*t," and andrew.'s "pho75" alongside Moemaw Naedon, Torito, Esh & Darko The Super. Now, ialive & Cody Cody Jones have re-merged with their first proper collaborative full-length fittingly titled COOL CODE & DON. "The resulting 11-track soundpiece boasts of slick grooves, fast-talking, and an effort to turn the mundane into spun sugar. This project is the fix for that sweet tooth, toots. So, grab some shades, it's getting bright as the reflection on that chrome bumper of your girlfriend's dad's '72 El Camino." Cody Cody Jones, COOL CODE himself, was kind enough as to provide us with a track-by-track breakdown of COOL CODE & DOn from his perspective. ialive & Cody Cody Jones' COOL CODE & DON is now available digitally, via Cold Rhymes Records


"'Busboy" was the first track ialive & I wrote together for this project. At the time, I'm not even sure if we knew a project was on the horizon, but we both had a chemistry that seemed to work when writing together. In March of 2018, I moved back to Pittsburgh from Philadelphia, but by June, I already took a Greyhound back out to visit ialive and some of my other pals. Hence, this track about two pals on opposite sides of The State was born."


"September of 2020 was when we wrote the last song, "Get The Bikes," for the release and, coincidentally, it became the first single we released. This track was, probably, the hardest for me to write just because of the world's political awakening to Racial Injustice was really in full-effect and it was tough to focus on anything except that. This was our second attempt on this beat and ialive set the pace with making it loosely about travel/bikes. After a few stabs, I was able get into a zone and write about a time when we were able to go to new places and leave the house without feeling guilty."


"GooGiE is the best rapper I've played a show with, maybe, not the most famous, but definitely the best. In January of 2018, GooGiE and some other [we are the] karma kids [members] toured through Philly and crashed with ialive and recorded a song while there. I went over the next day and did a short eight bars on that track. When I do a posse cut, I'm always trying to sound the most different (without being whack) not always the best because I know I can't out-rap some of these emcees. With that in mind, I was stoked to finally be on a track with GooGiE even though, it wasn't my track, even though it wasn't my best verse, even though the song ended up being a Bonus Track on ialive's 2020 instrumental [project] that was only made available to Cold Rhymes Bandcamp Subscribers. I did my verse first for this track and I can say without a doubt, it's one of my best recorded verses. Then, ialive did a verse that's equally as good, if not [better]. Then, I knew this was my best chance to ask GooGiE to be on a track without him completely blowing me out of the water. I nervously asked him if he wanted to do a verse and he responded right away with, "I got you, my genius" and it's been my favorite track of the project since."


"'Tats On My Toes" the second track written for this project. After ialive & I wrote "Busboy" together in Philly, he sent me home with a beat to work on that had a similar vibe. I turned this one around in less than two weeks. I think, then, we started to kick around the idea of doing something together, but we still had no real direction for the project."


"This is ialive's solo jawn. I can't speak to anything on the creative process, but I can say that he hit me up with a few other solo tracks for this project and this was definitely my favorite. One of my favorite ialive tracks, in general."


"I forget exactly when this song was written, but I feel like this one became the catalyst for COOL CODE & DON. I think, originally, I wrote and recorded this sometime when I was back visiting in Philly hanging with andrew. & ialive while crushing on some girl. I went back to Pittsburgh and ialive kept hitting me with demos of the song with his verse that kept getting better and better, while mine stayed the same. I played my verse from this one live every opportunity I got from Rock Room in Pittsburgh to Penny Lane in Renne, France. I ended up recording this one again, since I learned what words I wanted to emphasize and sent my stems in with the last few verses I submitted to ialive for this project. At first, he said I didn't need to re-do it, but once I did, he agreed that it was the move."


"ialive sent me this beat and I remember putting it on during my drive home from work one day when I got off a little early a few days before andrew. was coming to town and the hook just started coming out of me. I wrote and recorded a demo as soon as I got home. A few days later, when andrew. was coming to Pittsburgh, he said he wanted to record a track while in The Burgh' I hit him with a bunch of instrumentals and demos and that was the one he picked. Him and I had both of our verses done before ialive even knew we had anything started. We hit him up with our verses, he was down, and did the damn thing on [the] track."


"In 2019, I started to work in a bar for the first time. My relationship with alcohol has always been pretty on or off, but seeing drunk people while sober for the first time did a number on me. Everyone warned me that working in a bar would make me hate drinking, but I was desperate for cash, so I took it, even though I felt like so much of my personality at the time was dependent on my drinking. This track is partly fiction with a mixed bag of experiences that I've had, witnessed, and saw my life heading. I'm not frowning on anyone who drinks, I just know that I have a tough time doing it casually or responsibly."


"It would be dismissive to put a project out in 2020 that didn't state how you feel about the state of America, even if the album was written mostly in 2019. I, usually, only write about my personal experiences and emotions because that's what I feel the most qualified to speak publicly on or I just do some fun doo-doo rhymes, which is what this project mostly is. But it really felt like ialive & I had to set our flag in the ground with how we felt about everything happening around us. We tried to use this beat in 2019, ialive did a verse and I tried several times months apart to back him up, but I just couldn't get something that didn't feel forced. We talked a little about how we wanted people to know where we stood on some issues and a day later, [he] threw out his old verse and hit me with this one and I knew that this is where the beat was trying to go all along."


"This track, ialive sparked off. I had a bunch of the lines in my verse scattered through my Voice Memos and notebooks. I really just played a game of connect-the-dots making it work. I'm happy with it came out and that it briefly references my current state of sobriety, "... Small Coke easy on the ice. That's my new vice..." I'm not saying I'll be sober for forever, but to me, seeing the transition of kind of being over it in "Same Place" to me currently being dry on this track just helps tell the story of my life a bit better over this project. And this beat was so Funky that B. Rude came to mind right away. He's another rapper in our circle of peers that I think is Lightyears beyond where most of us are. I met him around 2013 and stayed in touch with him and ialive & I toured through Charleston, [West Virginia] and stayed with him while there and he just seemed like the perfect fit for this track."


"'Cycles" was the first track we wrote after we (mostly me) took an unofficial hiatus from this project. Honestly, I thought this song wasn't going to make the cut. I think, we were just writing back into the flow of working together. He sent me the beat and I set the tone for it. But, honestly, I think, it's a great fit for the project and even more fitting for the last track because working on this project, like everything else in life, goes in cycles."