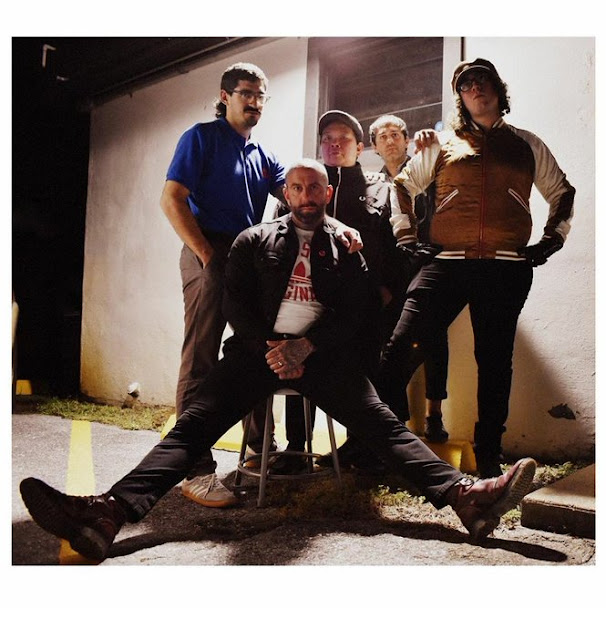 Liberty & Justice have quickly become one of our personal favorite bands in recent months. Honestly, at this point, we're not even exactly sure how or where we discovered Liberty & Justice, but we do know it was partly due to their socially distant remotely-recorded quarantine-shot music video for "Dancing On My Own" self-released this past March. In the months since, we've gotten to "know" the fellas from Liberty & Justice—Ryan "Crowns" Taylor, Cory "Gaza" Parker, Edwin Carson, Halston Luna & Ramzi Beshara—albeit, only via email (for now!) but they're a truly great, extremely motivated, hard-working gang of dudes.


Since releasing their exquisite Robyn cover, Liberty & Justice unleashed a like-minded cover of Green Day's "J.A.R." AKA "jason andrew relva," along with three originals, "no more orbits," "second ward serenade," and "halfway home," all uploaded to their Bandcamp page. We even had Ryan, Cory, Edwin, Halston & Ramzi all collectively contribute to a track-by-track breakdown highlighting the five aforementioned tracks. Last month, Liberty & Justice once more returned with a previosuly unannounced EP entitled MY AMERICA. "my america is a small collection of tracks recorded over late Summer 2020 in our practice space by our guitarist, Ramzi Beshara. It's our attempt at encapsulating the climate of our personal lives and our community over the past eight months," Ryan Taylor explained, via email.


"We've, personally, witnessed too many deaths close to us in the past few months; countless friends and loved ones sick. Numerous friends and loved ones out of work, businesses shutting down, while major corporations get bail-outs," a passionate Taylor continued. It consists of an original, a cover, and a new version of an old Liberty & Justice song. Last week our freinds over at NO ECHO recently hosted a premiere of Liberty & Justice's aforementioned original, "A New Town," which you can now see down below, as well. All of this appears to be a bit of a build-up to Liberty & Justice's second proper full-length, PRESSURE. Ryan Taylor told us PRESSURE is slated to be released early next year on Contra Records/Death Exclamations!


It will be Liberty & Justice's first release with both imprints and the latter's first proper release in some 10 years! We've already heard a single-tarck stream of PRESSURE and, trust us, it sounds phenomenal! So, one the heels of PRESSURE, we asked Liberty & Justice frontman Ryan Taylor if he would be so kind as to assemble a Skinhead/Street Punk/Oi!-centric playlist for our recurring column, With The Quickness. So, with all that said, we're proud to present to you With The Quickness #14: Ryan Taylor's Telephone Road Street Essentials, Vol. 1. It appears as though there are about 13 copies give or take of Liberty & Justice's my america EP still available to purchase on super-limited edition cassette. Stay tuned for additional release details concerning Liberty & Justice's PRESSURE to be released during January 2021.

"Favorite Oi! song, hands down. It's got everything. It's of that time. It's raw, primitive, tribal, and a quintessential beef track."

"First proper Oi! I was introduced to, via one of those Columbia House Punk You! CD comps. Never looked back. They had the attitude and spirit without getting too caught up in the dress; my favorites to this day."

"One of the most important bands doing it right now; pay attention. Enough said."

"Bruisers covering Iron Cross? Doesn't get more Pro-am than this."

"A true Street Rock band that's influence is world-wide and spans so many cultures and genres. WAR AC/DC."

"This album start-to-finish is a movement."

"Would have gone for Brad Logan or Black Derby Jacket, but this was the first video I saw that had me shook."

"Another band that's really important right now as much in sound and in message."

"France, usually, does it right; here's your proof."

EDITOR'S NOTE: One from Ryan Taylor's own band, Liberty & Justice, for good measure. Their latest EP, MY AMERICA, is now available on digital streaming services, as well as a super-limited number of cassette tapes.