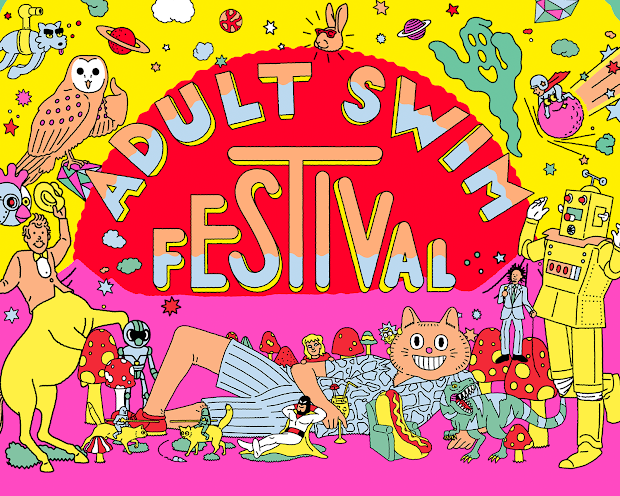 [adult swim] Festival 2020 held virtually this past weekend, Novemeber 13-14th, was billed as "MUSIC, COMEDY, AND MAYHEM FROM YOUR COUCH!" and was streamed exclusively on YouTube in real-time. Broken down into separate categories such as Music, Watch Party, Live, and Giveaway, [as] Fest's performers included D∆WN, J.I.D. KAYTRANADA, Mastodon, Open Mike Eagle, Robyn, Run The Jewels, Colin Stetson (Bon Iver,) Thundercat & Ariana Grande, Tycho, and Kamasi Washington. With said performances, appearances, DJ sets, premieres, and specials being streaming online from about 2:00pm-12:20am Friday and 10:00am-11:50 Saturday, we decided to set some Reminders for specific performances that interested us most. Although, now, both full-day live sets are streaming on YouTube in their entirety, as well as separate segments for each respective artist, performer, or special.


So, for purposes of this specific feature, we decided to focus on a number of particular performances that stood out to us from this past weekends's [adult swim] Festival. First and foremost, Run The Jewels (being billed as The Yankee & The Brave) hosted an impromptu Q&A and "live-action" music video premiere for their latest single, "No Save Point." Released separately as a stand-along single Thursday afternoon, "No Save Point" will be featured within upcoming eagerly-awaited video game, Cyberpunk 2077. "Getting the opportunity to drop my favorite rappers into the world of Cyberpunk 2077 was a dream come true," says director Mike "D" Diva. "My team at Lord Danger and I truly poured our hearts into making this video a love letter to all the things Cyberpunk/Run The Jewels and I hope everyone enjoys watching it as much as we did making it."


So, in addition to their own phenomenal album RTJ4 released earlier this year, now, El-P & Killer Mike have made an appearance in yet another video game and cooked up a special non-album track just for the occasion. Apparently, about 20 years in-the-making, Deftones have announced a cleverly-titled remix album titled Black Stallion to go along with a 20th anniversary edition of their third album, White Pony. After unveiling Purity Ring's remix of "Knife P(a)rty" late last month, Deftones let loose a second remix from Black Stallion early Friday morning. Billed as a "Galactic Premiere," [adult swim] Festival hosted the debut of a remix Mike Shinoda (Linkin Park, Fort Minor) had cooked up for "Passenger" featuring Maynard James Keenan from Tool. Shinoda's re-imagined track was accompanied by a music video directed by Aaron Hymes, all of which premiered during [adult swim] Festival's first day at 12:12am.


It's a grim, dimly-lit music video, which works as the perfect visual accompaniment for Mike Shinoda's eerie stripped down gradually building "Passenger" Remix. Another set from this past weekend's we enjoyed enough to write about was Mastodon's Friday night set. Brann Dailor, Brent Hinds, Bill Kelliher & Troy Sanders played a nearly 30-minute mini-concert sporting Day-Glo colored face paint and make-up under a black light. Mastodon's late night set included impassioned renditions of "Asleep In The Deep" & "The Motherload," from Once More 'Round The Sun (2014,) "Thickening" from The Hunter (2011,) "Steambreather" from Emperor of Sand (2017,) and "Blood & Thunder" from Levithan (2004.) Nothing was played from Mastodon's latest odds & ends-style comp. Medium Rarities, but they played some great jams from throughout their storied career backed by scantily-clad dancers during stand-out, "The Motherload."


In other non-Mastadon-related news, both Troy Sanders' long-standing super-groups Gone Is Gone and Killer Be Killed have slowly been rolling out new music this year; with Gone Is Gone releasing a series of digital singles entitled "Everything Is Wonderfall," "Sometimes I Feel," "Breaks," and "Death of a Dream," while Killer Be Killed has pumped out three surprise-released singles, "Deconstructing Self-Destruction," "Dream Gone Bad," and "Inner Calm from Outer Storms." All of the materila mentioned above is now viewable or streaming online with [adult swim] Festival 2020's full-day live sets from both Friday, November 13th and Saturday, November 14th now available on YouTube.