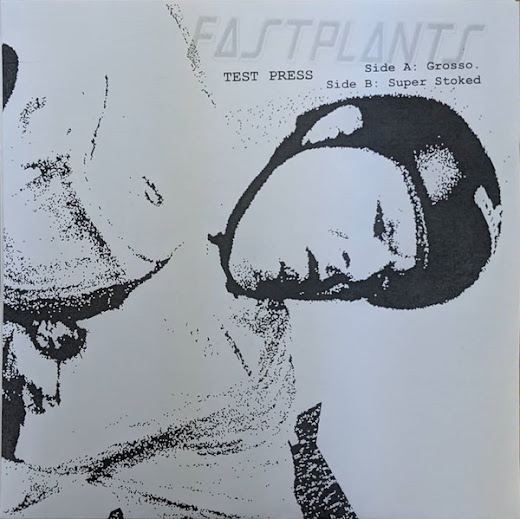 FASTPLANTS are a self-described "Chicago-land Skate Punk band hailing from Waukegan, Illinois. Their Bandcamp page fittingly explains, "we're into skateboarding and Punk Rock." FASTPLANTS' current line-up consists of life-long skateboarders and musicians Matt Anzelone (guitar/vocals,) Abe Linders (guitar/vocals,) Marc Harman (drums,) and Kevin Tabisz (bass.) Throughout 2017, FASTPLANTS released two full-lengths on Milwaukee-based Beer City Records, Spread The Stoke and Split L.P. with Scottish Crossover Thrash/Skate-core band Daniel Wax Off. Prior to said tandem full-lengths, FASTPLANTS self-released two EP's, fittingly titled EP01-02. in partnership with Moriarty Records between 2014-15. Now, FASTPLANTS have returned with a brand new 7-inch/digital single on a brand new label all in tribute/homage to one of their favorite skateboarders, Jeff Grosso, who, unfortunately, passed away this past March at the tender age of 51.


"Grosso" B/W "Super Stoked" 7-inch features newly re-recorded versions of "Grosso" from Split L.P. (2017) and "Super Stoked" from EP02. It appears as though the 2020 rendition of "Grosso" is, actually, FASTPLANTS' third time recording and releasing the track, as a similarly-named track, "Jeff Grosso," first appeared on EP01. way back in 2014. However, in any case, FASTPLANTS' "Grosso" B/W "Super Stoked" is now available to purchase directly from the band themselves or Not Like You Records & 'zine. There are (/were?) 500 copies pressed total: 100 white-colored vinyl copies being sold exclusively on Not Like You Records' and 400 on yellow vinyl. Additionally, there were a super-limited number of white label TEST PRESS 7-inch vinyl, which, we would assume has now completely sold out since the record's initial October 30th release.


"We're all old skateboarders and the whole point of the band is to impart our love of skateboarding and the culture that surrounds and emanates from it, while doing our part to be a dynamic part of that culture," FASTPLANTS' Matt Anzelone told us within an email. We're waiting here in the Northern Chicago suburbs for this all to end and once it does, we will be piling back into our trusty '88 Ford Econoline and get back out on the road where we belong," Anzelone continued. FASTPLANTS' "Grosso" 7-inch is still available in limited quantities from Not Like You Records' web-store or from FASTPLANTS' Bandcamp page in both physical and digital formats. 100% of the proceeds raised from the sale of FASTPLANTS' "Grosso" 7-inch will be donated directly to skateboard-related charities of the band's choosing.