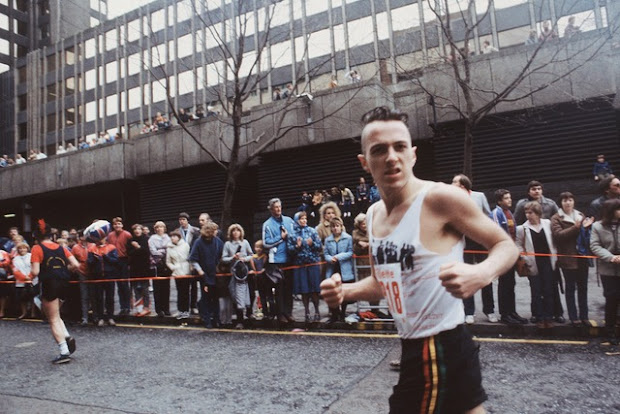 "YOU'RE NOT CRYING! I'M CRYING! NO, SERIOUSLY, I'M F***ING CRYING... I JUST RECEIVED FOUR BOXES OF MY OLD COLOUR TRANSPARENCIES & HAD NO F***ING IDEA WHAT WAS THERE AND THIS IS THE FIRST THING I FOUND: THERE'S COLOUR OF JOE STRUMMER IN THE F**ING LONDON MARATHON AND COLOUR OF THE CLASH AT THE BRIXTON FAIR DEAL AND I'M F***ING OVERWHELMED!!!" Steve Rapport (@steverapportphotography) ecstatically wrote within a Description posted along with an image on June 29. Rapport, a California-based London-bred Rock "N" Roll photographer was originally active from 1980-94. Simply Scrolling through Steve Rapport's Instagram page, it can quickly been seen he has photographed everyone from Sir Paul McCartney to Motörhead's Lemmy Kilmister. An obvious Joe Strummer fan, we Direct Messaged Steve on Instagram a while back and asked him to curate a Joe Strummer & The Clash-centric playlist. It took us a little while to align our equally hectic schedules, but, below, you'll see Steve Rapport's The Clash "Running" Playlist. Rapport's 22-song 1 hour 22 minute playlist is accompanied by a bit of commentary on photographing Joe Strummer during the 1983 London Marathon for Rolling Stone. Prints of Steve Rapport's photography are now available to purchase directly from his online store.

Here's the story: I loved The Clash. When I was a student, I used to go and see them all the time, including The Rock Against Racism gig at Victoria Park in Hackney, [East London, England] (probably not more than a mile from where I was born in Stepney.) As a photographer, in June 1982, I was sent to LA for a weekend by Sounds [music newspaper] with my late, lamented best mate, Johnny Waller, to do a Bow Wow Wow feature. We stayed with the band at the legendary Sunset Marquis—along with The Beat (old mates,) The Clash and Kid Creole & The Coconuts.

I went out for a drink at Barney's Beanery with Kosmo Vinyl and the legend, Joe Strummer. Via some drinking game or other, I found out that the first LP me and Joe bought was the same one—Every Picture Tells A Story by Rod Stewart. Great, great album (Ziggy Stardust was my second LP!) The Clash & The Beat were playing at The Hollywood Palladium and they invited us, so together with Bow Wow Wow, we went to see that amazing show. I have a great photo of the outside of the theater.

A few months later, in early 1983, I got a call out of the blue from Rolling Stone. They told me Joe Strummer was running in The London Marathon on April 17th and they needed a photo. I don't think I'd ever worked for them before (in total, I think, they only ever gave me, maybe, three assignments.) They gave me no other info—no contact name, nothing. 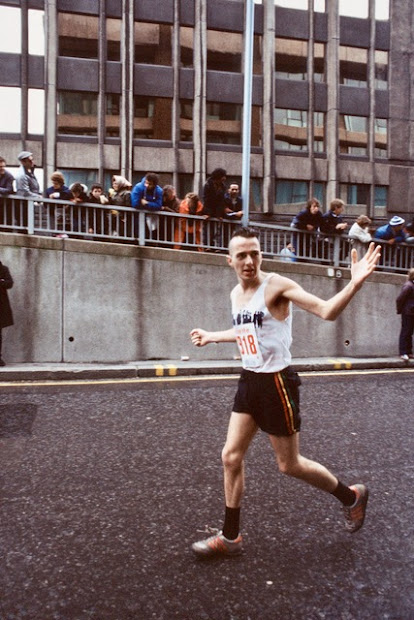 
So, early on the morning of the race, I drove over to Blackheath from my home in Clapham. It was drizzling and there were around 30,000 people assembling on the common for the race. I parked, got out of my car... and there was Joe, standing there plain as day, in the midst of the swarm early on a drizzly morning, warming up. He was wearing a torn "Police & Thieves" T-shirt and some bloke, without recognizing him, said "great band." I walked over, (re-)introduced myself, and took a few photos, including the lovely one of him smiling. This is, truly, one of my favorite photos from my entire career. A Punk French running clothes company (Satisfy Running,) actually, unearthed the photo around three years ago and we worked together to use it as a ["moth-eaten"] running T-shirt.

Anyway... I thought I should try to get a picture of Joe actually running the marathon, so I drove to somewhere near Tower Bridge and, then, set myself up on Lower Thames Street, looking North towards Saint Mary-At-Hill Alley, waiting in the cold drizzle for couple of hours for a glimpse of our bandy-legged hero, but... nothing. I was damp through and through, shivering, and ready to head for home. As I was packing away my cameras... I saw Joe Strummer shuffling his way towards me down Lower Thames Street at around Mile 20. In a slight panic, I grabbed my camera and managed to rattle off a number shots as he passed by. Job done!

I always had two cameras around my neck, one with [black-and-white] film, the other with colour. I don't remember shooting colour of The London Marathon, but earlier this year, I received four boxes of my colour transparencies from an (untrustworthy) photo agency in London with whom I no longer wanted to be associated and HELLO! amongst them, I found a treasure trove of colour photos of Joe, taken both before and during The Marathon. Historic, lovely shots with Joe smiling, waving, growling, and, generally, looking Punk as f**k.

Joe finished The Marathon in 4 hours 13 minutes and 11 years later, I, also, ran The London Marathon, which for several miles after Mile 10, winds around the neighborhoods of my birth and my family history. In my West Ham shirt. Great days! 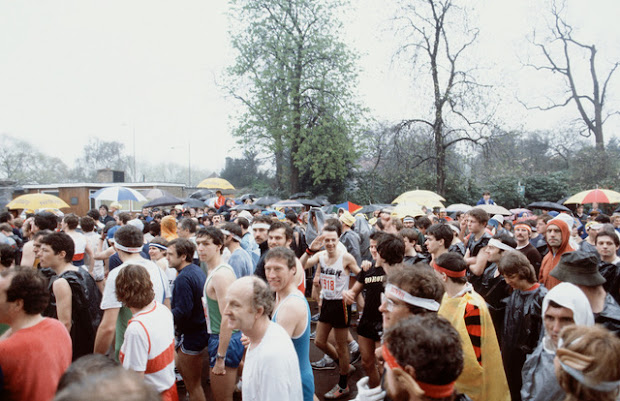